We’re sensing a trend with Prodigal Son‘s season finales: They usually end with a Whitly sibling stabbing somebody.

Little more than a week after the Fox thriller was cancelled, its series finale aired Tuesday night, culminating with a gasp-inducing twist that found Bright stabbing — and perhaps killing? — his own father. (Last season, it was Bright’s sister, Ainsley, who turned a knife on Nicholas Endicott. Many times.)

During the episode, Martin took Bright up to Vermont, where he was determined to prove to his son that he’s no longer the murderous man he was 25 years ago. To drive that point home, he recruited Bright to try and track down an elusive killer known as The Woodsman, who Martin suspected may have recently abducted a young woman named Jeannie Larkin. Perhaps by finding Jeannie and neutralizing The Woodsman, Martin could convince Bright he was truly a changed man.

In the end, they did suss out The Woodsman, and they did rescue Jeannie Larkin — but Bright called the cops on his father anyway, and a betrayed Martin quickly returned to his old ways. “I was a good father,” Martin told Bright. “But you? You were never a good son.” As Martin approached Bright with a knife in his hand, Bright turned the weapon on his father at the last second, driving it into Dear Old Dad’s stomach. And when Bright’s NYPD colleagues located the men in the woods moments later, Dani had an appropriate question for Bright when she noticed his father on the ground: “What did you do?!”

Below, Prodigal Son co-creators Chris Fedak and Sam Sklaver unpack Martin and Bright’s final confrontation, offer some teasers about where Season 3 would have gone, and update us on the series’ possible resurrection.

TVLINE | Even though this episode ends with a cliffhanger, it felt — to me, at least — like it also worked as a series finale. As you wrote and produced it, were you planning the episode as a potential series ender?
FEDAK | No. We were approaching it as, “What’s the most exciting way to end Season 2?” We also feel, like you do, that it is not a series finale that doesn’t work because we’ve been cancelled. It still does work… This isn’t like ALF being captured by the government before they were cancelled. It’s still a good and exciting story.
SKLAVER | What COVID taught us is that you’re never sure what tomorrow is going to bring. When we knew Fox had ordered 13 episodes, we needed each one to feel like a finale. If we were only able to produce 11 episodes, then it would end with Martin in Vivian’s car, and that would be cool. If it could only be 12, then it would end with Martin and Bright on a sea boat, and that seemed like a pretty great finale. We kept pushing the bar and putting ourselves in these crazier and crazier situations. The finale really feels like we’ve earned everything that happens in that moment, but it’s pretty crazy to know, in 13 episodes, we were able to tell this story. We found it very satisfying. We have a whole Season 3 story locked and loaded, and we don’t want to stop telling this story. But we’re feeling good about how this ended on Fox.
FEDAK | If you’re a network out there looking for a story, we have one. It’s ready to go. Sam and Chris will get on the phone. I feel like a rug salesman. “Come on down to Crazy Chris’s!”
SKLAVER | I know. The fans are working so hard to get our show renewed. I feel like I need to do my part, as well.

TVLINE | To that end, what can you say about what was in store for Season 3?
SKLAVER | Without sharing too much, it was going to be the best season of television ever produced.
FEDAK | That’s true. That’s true.
SKLAVER | [Laughs] No, we have a really fun Season 3 pitch. We don’t want to give too much of it away because we’re still hopeful of being able to tell that story. But Bright stabbing Martin at the end wasn’t going to make anyone’s life easier, and I think our show flourishes when all of our characters face adversity. Bright and Dani just kissed, but they’re not going to be able to get past this. Gil and Jessica are in a good place. There’s so many places that we could jump off from the ending of this season, and that’s what’s so exciting for us.
FEDAK | And on a technical level, our plan was to include Michael Sheen in Season 3, so that gives you a little bit of insight into where we were going. He was definitely going to be a part of the show. 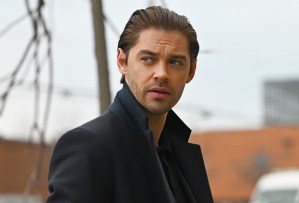 TVLINE | To what degree are conversations happening about bringing the show somewhere else?
FEDAK | It’s not really Sam and I having those discussions. Those conversations are being had. I can’t speak to them, because it’s more of a studio thing. The one thing we’ll say is Warner Bros. has been an incredible advocate for the show. They’ve been great to us, and they’ve been very supportive, and they love the show. And Fox loves the show, too. The executives that bought the show and championed the show were all advocates and all gutted by the situation we’ve found ourselves in. So we’re hopeful, but it’s a studio thing now.

TVLINE | Assuming this episode does stand as the series finale, is there an interpretation of that final scene you want fans to have? Like, should we assume Martin dies in those woods?
FEDAK | I like open-ended finales, but then again, I know there’s Chuck fans that still want to kill me. [Laughs]
SKLAVER | Chris and I are both pleasers, as a personality trait. I would just like fans to be very happy with this finale. However they want Martin to be at the end — I know how I imagine Martin being in the end, but I don’t want to say something that makes someone less happy, you know what I mean? [Laughs]
FEDAK | What a wimp.
SKLAVER | No! I just want people to be happy when a son stabs his father in the gut. I hope that sparks joy for someone. [Laughs] I guess it is an open-ended finale, but I’m very happy with it, and I hope people are happy with it, as well.

TVLINE | So much of this finale centers on Martin’s capacity to change. Did either of you believe he truly could? Or did he simply want to believe he could change?
SKLAVER | I’ll just say it: Even if Martin can change, he killed 23 people. And he can’t be in this world. That’s not up for debate. While the son in Bright wants to believe his father doesn’t have this darkness in him anymore, the profiler and the FBI agent knows, like Bright says, that Martin isn’t for this world. It’s not up to them to decide if Martin is allowed to be out.
FEDAK | I totally disagree with Sam. [Laughs] I’d like to advocate for the serial killer in this version of the story. Can Martin change? I think the answer is kind of yes, maybe. But he is a psychopath. Michael [Sheen] had a very interesting take on this, even from the beginning of the show, which is that he can make the world what he wants it to be. It’s not like he feels tied to those 23 murders. He’s made a decision over time to say, “I’m not this person anymore.” But that doesn’t mean he can actually control it totally. 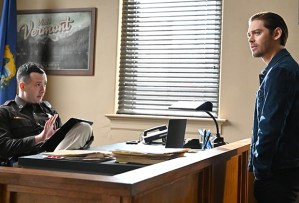 TVLINE | And a few scenes earlier, we see Martin come out of that cabin, having hurt The Woodsman, and he looks exhilarated by what he’s just done. Is that the moment when Bright realizes, “This is a lost cause”?
SKLAVER | The scene before that is, in my opinion, one of the most interesting scenes we’ve ever done on our show, where Bright has to convince his father to hurt someone, when all Martin is telling us is that he doesn’t want to do that. It’s akin to forcing someone in recovery to take a drink. That scene is as consequential as what happens afterward. I’m not sure if Martin walks out of there exhilarated, in my mind, although he is in a place. He’s under a spell. But it’s a spell that, in some ways, Bright pushed him toward. There’s the reading you had, which is very valid, that this man will never change. But there’s also the reading of, “This man is in this space because I pushed him there,” and how that could affect Bright going forward is a very interesting story to me.
FEDAK | You could look at that final confrontation, and Martin is so upset with his son, not only for calling the police but for getting him to hurt somebody. And you kind of understand why he’s mad! In a way, he’s been betrayed.
SKLAVER | Bright wasn’t the best son. He was the best profiler. He found Jeannie Larkin and saved the girl. And that’s the problem with Bright: He’s always been a son and a profiler. And the need to save a life caused him to be a bad son, for sure.

TVLINE | Looking back on this season, was there anything else — a scene, a storyline — that you’d hoped to explore but didn’t get the chance?
FEDAK | At the beginning of the season, we had a JT story that was part of our first episode, which touched upon the Black Lives Matter movement and racism inside the police force. What happened was, COVID affected the show, and whenever something would happen in regards to [production changes], we’d have to change the story, we’d have to make moves. There were parts of that story that we weren’t able to address in Season 2 that we’d hoped to get to. It was something that we had to address in a different way, with the hope that in Season 3, we’d be able to come back and give that more air and time to breathe.
SKLAVER | The other thing is, toward the end of this season, we started to really love Martin out in the world — in the finale, but even in that beach house with Vivian. We’ve done a lot of episodes with Michael, and he’s always in Claremont or he’s in flashbacks. He’s always on our stage. Once we could put him out in the world — I think Michael felt it, too — it was just another version of Martin Whitly, and it’s a version that I loved. Take what you will from this, but it was something we were very interested in pushing further in Season 3, just getting Martin out of Claremont more and giving this complex character even more dimensions.

Your turn, Prodigal Son fans! Grade the series finale in our poll below, then hit the comments with your full reactions.