“Sharpwin” fans, are you still breathing? Tuesday’s incredibly intense episode of New Amsterdam found the hospital battling a chemical spill within their own halls, with two doctors suffering severe consequences from the exposure.

After Helen Sharpe discovered Max clutching the leaking pipe in an effort to slow the chemical’s spread, he revealed a troubling detail: He couldn’t see. A distraught Helen ushered Max into the decontamination shower, frantically washing off his body and cradling him after he collapsed, his ring hand clutching at her back.

Max’s outlook initially appeared very dire, with no method in place to combat the poisoning, but Floyd saved the day with a new protocol. Max awoke to Helen sitting by his bedside, clutching her tasbih prayer beads — but he had no memory of what transpired in the shower. Helen played off the significant moment, turning her back to Max, who suddenly started to remember. “You were there, weren’t you?” he said softly. “I’m sorry. Sometimes it takes me a minute to remember what matters more than anything: you.” 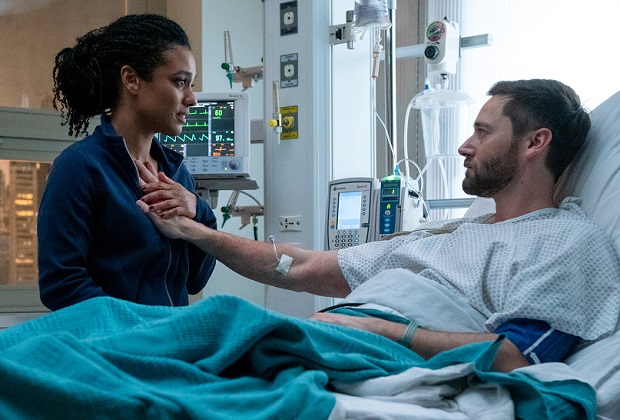 With that, Helen turned back to Max and approached his side, after which he placed his hand over her heart, and she placed her hand on his. The two then started to lean in to each other… only to be interrupted by a phone call: Max’s in-laws want custody of Luna.

The big “Sharpwin” development comes after nearly three full seasons of buildup, and after another particularly loaded exchange between the pair just weeks ago. “I felt like Max was ready [to take the next step] in Episode 10 on the rooftop with Sharpe,” executive producer David Schulner tells TVLine in an exclusive interview. However, Helen was so wrapped up in “her relationship with Mina that she could not commit to Max in that moment. But I felt like Max was reaching out for the first time, only to be rebuffed by Sharpe when she said she was so glad they were friends, and that’s all she could be at that moment.”

But in this Tuesday’s installment, it’s “the first time that both of them are in the same place, or were forced to be in the same place at the same time,” Schulner says, adding that there’s “nothing like your own mortality to put you in the right frame of mind.”

After everything that is said and unsaid between Max and Helen this week, “they are on a trajectory that only Luna [being] ripped out of Max’s hands could take them off for a moment,” Schulner previews. “We know Max and Sharpe want each other, desperately, and now we just have to see if they can have it. But they’re in it together, and we just have to see if it’s going to happen.” 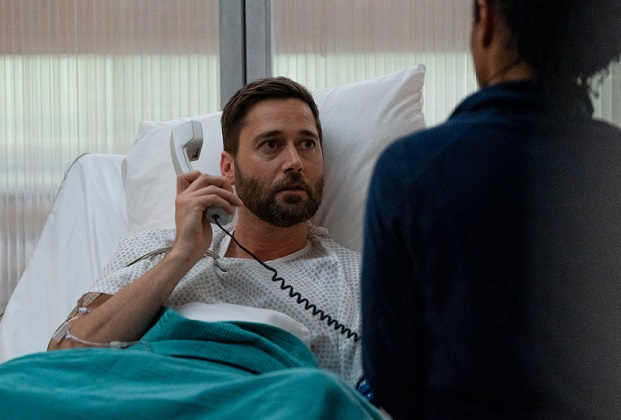 Even with a potential custody battle diverting Max’s focus, “there’s no turning back from” what transpired between him and Helen, Schulner assures TVLine.

Adds the EP: “There are lots of conversations that they need to have. There’s a lot to unpack, and there are only [two] episodes left [this season].”

Speaking of conversations, viewers may have noticed that an indecipherable one took place as Helen held Max. “We wrote this really beautiful scene between them in the decontamination shower, and when we got the footage back, two things happened: One, the dialogue was all unusable because of the shower,” Schulner explains. “So we would have had to loop every piece of dialogue and put it in their mouth, which is not preferable [and] is not what you want to do, especially in a moment that tender.”

“The second thing that happened was the way [director] Darnell [Martin] shot it was so beautiful and so moving that, as an experiment, I just turned off the sound and watched the scene again without any sound, and I found myself in tears,” Schulner continues. “So I made the decision to cut all the dialogue out and just rely on Ryan [Eggold], Freema [Agyeman], Darnell and our cinematographer, Andy [Voegeli], to tell the story… I felt like Andy’s camera was inside that shower with them. I felt like that camera was telling the story, and Darnell’s direction and Ryan and Freema’s acting, it was all I needed.”

Schulner also cleared up another (unrelated) mystery for TVLine: It was Casey who found Dr. Lauren Bloom after she, too, collapsed from exposure. “We had a beautiful scene of Casey lifting her up in his arms and carrying her away to safety, but we had to make some trims for time. And it’s always better to leave someone in jeopardy than let the audience know that they’re safe,” the EP shares.