Warning: This post contains a major spoiler from Episodes 2 and 6 of The Underground Railroad.

To be clear, The Underground Railroad is a serious and thought-provoking work of art.

The 10-part limited series, which Oscar winner Barry Jenkins adapted from Colson Whitehead’s Pulitzer Prize-winning novel of the same name, is now streaming on Amazon Prime and is in many ways a visually rich conversation starter on American slavery and race relations. But part of that visual is Krypton‘s Aaron Pierre as Caesar — who, within five minutes of watching Episode 1, has the ability to make viewers focus on little else but him. Or, as one fan on Twitter phrased it, “he reminds me of Javier Bardem — a face that just wants to be looked at. Powerful looking dude.”

Thankfully, Pierre is a wonderful actor, and his ability to convey great depth with just a slow-boiling sidelong glance is in and of itself a reason to pay attention to him opposite star Thuso Mbedu, TVLine’s most recent Performer of the Week.

Speaking of which, Mbedu says she noticed the London native’s charms as much as viewers have and will — but only as herself. As Cora, who initially and quizzically tells Caesar she won’t run away with him to freedom, she can’t see his handsome face and broad shoulders or hear his seductive baritone voice. 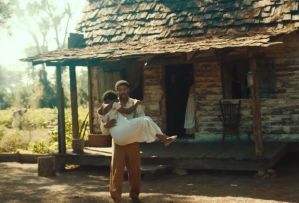 “Caesar was friends with the group who called Cora names at every single turn,” Mbedu recalls. “He was part of that crew. So she’s not seeing him for the god that he is. She’s seeing all the ugly. But that’s Cora. As Thuso, I was like, ‘Hey, Aaron!'”

“Cora absolutely would question running away with Caesar because I think in that moment, Cora can’t see anything and she cannot see how beautiful he is,” Jenkins contends. “The only thing she can see is that the person who should want her the most, her mother, abandoned her at this plantation. That’s all she can see. Caesar’s job, as handsome as he is, is to very slowly and subtly remind her that ‘I see you. I need you. I want you. You are special.’ I think that’s the role he plays in her life.” 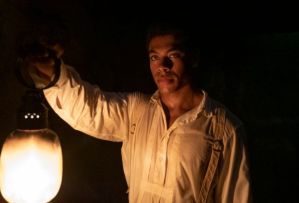 As for Pierre, he is flattered by all the Twitter and social media love he has received, and he appreciates that fans are brokenhearted that his character is murdered by a racist and angry mob at the end of Episode 2 and confirmed in Episode 6. (Sadly, the same happens in the book.) That is why Pierre did the most with the time he had on screen, he says, including Cora’s visions and the dream sequence when the two say a tearful goodbye.

“I tried to be as present as I could be in the moments that he is there in body,” Pierre says in earnest. “What Barry does so beautifully with this series is he allows Caesar to transcend into a different sphere. Although he may not be there in body, he is there in spirit for Cora for the duration of her journey. In that, he triumphs above the way his life came to an end, which was hateful and violent. He triumphs over that violence and that hate by existing in a spiritual context for Cora.”