Warning: The following contains major spoilers for Zoey’s Extraordinary Playlist. Proceed at your own risk!

Oh, how the tables have turned! Zoey’s Extraordinary Playlist wrapped up its second season on Sunday with a heart song — but this time, it was Zoey doing the singing! And on the receiving end of her musical declaration of love was Max, who could suddenly hear Zoey’s heart song!

Prior to that cliffhanger, Zoey and Simon had split up, and then the titular gal got a dream visit from her dad, who encouraged her to take risks and really live life. So Zoey decided to rush to the airport to stop Max from leaving for New York City with Rose. But when she got there, she heard Max sing “When a Man Loves a Woman” and left without saying a word, assuming the tune was about Rose. However, when Max unexpectedly showed up at the park where Zoey was sitting forlornly, it was obvious the ode was about her.

Max explained that he and Rose broke things off because they could both tell his mind was on someone else. Then as Zoey declared that she was all in, she started to break out in a rousing performance of Modern English’s “I Melt With You,” shocking a bewildered Max.

Below, showrunner Austin Winsberg breaks down the big powers twist and what it means for Max and Zoey’s romantic future. (And for the latest intel on Zoey’s Season 3 odds, keep tabs on our 2021 Renewal Scorecard.)

TVLINE | What excited you about this twist with the powers and what it opens up for a potential Season 3?
I’m always trying to think of new ways that we can twist and spin and do new things with the powers. We had talked about this pretty early on in Season 1, the idea of Max getting the powers at some point. Certainly, when you think of superhero origin stories, there seems like there’s always a place in the superhero shows where they find somebody else who also has powers. So we liked the idea of being able to do our own version of that. 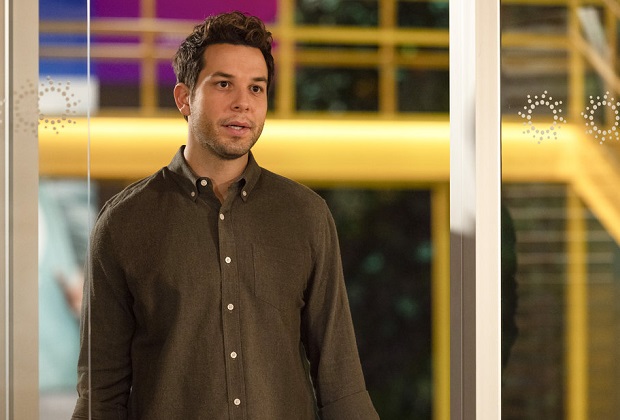 But the other thing that we had really established a lot in Season 1, especially in Season 2, as well, was this idea that Max feels like there’s an inequality in their relationship, because Zoey has the ability to hear what’s going on in his heart, in his brain, and he doesn’t get to do the same with her. I think in any relationship in life, there needs to be some degree of equality in order for the relationship to work. So just in terms of thinking how could Zoey and Max work long-term, for me, it was important for Max to have an understanding of what it’s like for Zoey to experience heart songs. And I also like the idea that Max could know what’s going on in Zoey’s head as well. And certainly, from a romantic comedy perspective, to be able to play stories where these two people are in a relationship, but they also know exactly what the other person is thinking about, felt like ripe ground for storylines.

TVLINE | To clarify, both Max and Zoey have powers at the end of the finale? Or is it that the powers have transferred from Zoey over to Max?
I don’t want to clarify that entirely yet. 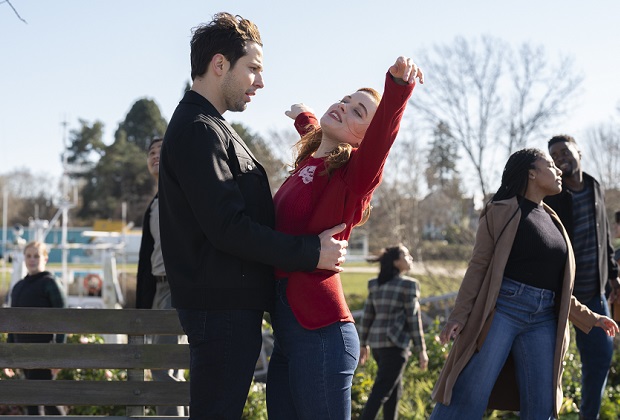 TVLINE | Zoey’s heart song was so exuberant, so joyous and free. Were there other songs that were in consideration for that moment, or was it always “I Melt With You”?
For some reason, that was the song I kept going back to. Obviously, there are a lot of love songs out there. We might have danced around a few others. But it just always felt right to me. It felt right for Jane [Levy’s] voice. I liked the idea that the first song we ever heard in the pilot was “It’s the End of the World as We Know It,” and this song [goes], “l’ll stop the world and melt with you.” I thought there was some nice bookend world specificity to both of those. I liked that she said, “Making love to you was never second best,” after the whole Zoey/Simon/Max of it all. There was just something about it that felt very right to me, so I stuck to that one pretty quickly.

TVLINE | Speaking of the whole Zoey/Simon/Max of it all, talk to me about Zoey’s choices with regards to Simon and Max in this episode. What went into the thinking behind those decisions?
When I mapped out the arc of the season, from the very beginning, I wanted to make sure that Zoey wasn’t indecisive and vacillating between both guys and not making moves in either direction. So I really felt like what was going to frustrate audiences with this idea of Zoey not picking either one. And so we made a conscious choice that I thought was a bold choice for her to choose Max at the end of Episode 1, and for them to at least try to do that and sort of realize pretty quickly that it’s still too early in her grief for her to really be ready for a relationship. 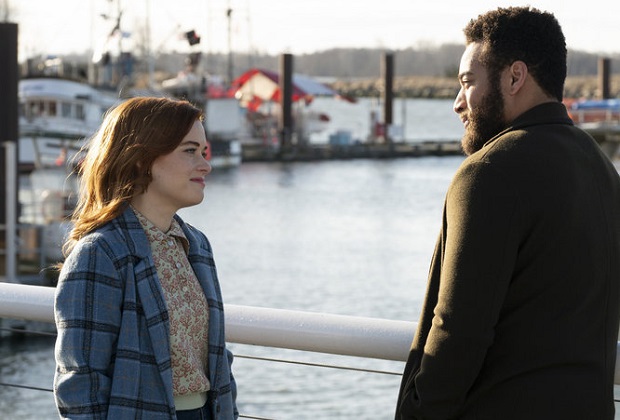 I did feel like because of the dynamic that had been created between Zoey and Simon, and the chemistry between them, I felt like that Zoey really needed to play that out in some way. And we found as we were breaking Episodes 9, 10 and 11, and dealing with the relationship stuff between Zoey and Simon, that there was a fundamental thing that she was keeping from him, which is telling him about the powers. I think that she was afraid to really open up to him that way and afraid of what that might mean, especially since their entire way that they met in the pilot was predicated on a little bit of deception in some way. I think she just didn’t feel like she could be open with him or wanted to be open with him in that way, and then the power kept getting in the way of things between them. It just felt like they were both trying really hard to make it work. So I liked the idea of exploring something where the fantasy of it or the expectation of it is maybe not as rewarding or fulfilling for either of them when they’re actually in it. It was always leading to this place, for me, that Zoey and Simon were going to break up at the end of the season, and then to see how it played out with her and Max.

It was just important to me to not make Simon feel like the victim in it, to not hurt Simon. That’s why I wanted him to be the one to say, “I think we should break up,” and then to also give Simon his own victories in the episode [as the boss of SPRQ Point’s new minority-run acquisition], because we’ve seen Simon at his depths of despair in Season 1, and I didn’t want to end in that way. I wanted to end him in a more positive, forward-facing place and feeling like he’s excited about the future. 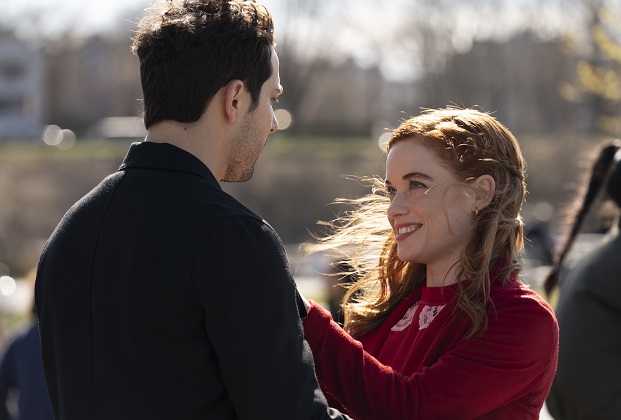 TVLINE | Between the breakup with Simon and Zoey, and Zoey’s declaration to Max at the end, is it safe to say the love triangle is officially concluded, and moving forward, it’s about Zoey and Max giving it a real try?
Certainly, my intentions going forward are that she and Max are going to try to make it work in a real way. And I don’t have intentions to uproot that or implode that, but it’s also TV storytelling. You have to create complications and challenges in relationships. Otherwise, if there’s no conflict, you don’t have a show. But certainly, my intention moving forward is to approach Zoey and Max dating and being together in a meaningful way, for them to try to work out their differences and their challenges together.

TVLINE | It seemed like a very deliberate and mature choice to have Zoey come to the airport and not stand in the way of Max and Rose. But then it ends up being on Max to make the first move. So how did you come to the conclusion that that’s the way the chain of events needed to go?
In the spirit of not wanting to pit women against women or men against men, and what that would actually look like if you approached someone outside of the airport and said, “Pick me over her,” it’s pretty dramatic. I also felt like there was a delightful mislead that she hears him sing “When a Man Loves a Woman,” and she thinks that’s about Rose, and fundamentally, Max’s happiness is what’s more important to Zoey, and she doesn’t want to take that away from him. And so even though the reveal at the end is that he was actually singing that song about Zoey, I think that Zoey and Max have always had the other person’s best interest in mind, as evidenced when he gave up the job for her in the last episode. So I think for her, that was that wakeup call moment, where his happiness was more important to her than maybe her own loss in that moment. 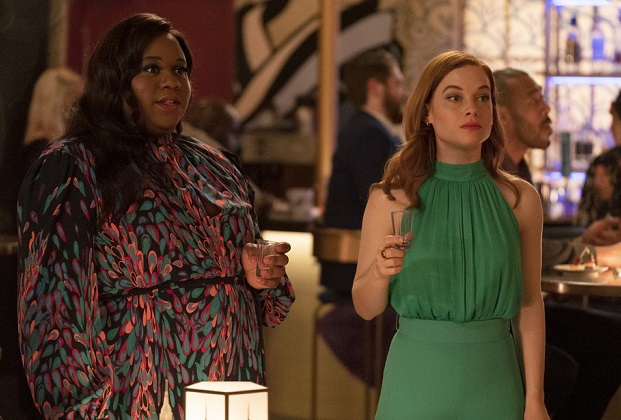 TVLINE | You set up a really wonderful romance for Mo this season. Is there anything you can hint about what we could expect in a Season 3, if that goes forward?
Part of the design of the season was to wrap up certain chapters in these characters’ lives or at least put some conclusion on it, but also set the path forward for everybody. And for me, I’m really excited about Mo and Perry. I think David St. Louis has been a great addition to the cast as Perry. I’m really excited to see what it looks like for Mo to be in a real adult relationship, but also to be in a complicated adult relationship with kids and an ex-husband, and the prospect of a character who is kind of an independent, free character getting brought into a domestic life, and maybe getting a little bit more than he bargained for, kind of insta-family. There’s a lot of opportunity for comedy and drama within that.

And I’m really excited for the next chapter for Maggie, too, and this idea of Maggie, potentially, slowly dipping her toes back into the dating world… The idea of Maggie and Deb as partners in crime, and Maggie exploring the idea of how a woman of a certain age, what it actually looks like for her to try to go back into the dating world in a meaningful way, I think there are a lot of stories we can derive from that.

Zoey’s Playlist fans, what did you think of the season ender? Grade it below, then hit the comments!