When Season 1 of Who Killed Sara? came to a conclusion last month, fans were left scratching their heads — and not just about the Netflix series’ titular question.

Among the nagging unsolved mysteries: Is Sara really dead? Is Elroy dead? Whose skeletal remains are in Alex’s backyard? And what is Mariana going to do to Sofia’s baby?

Manolo Cardona, who stars as Alex Guzman, Sara’s vengeful older brother, promises “fans are going to get answers” when Season 2 drops on Wednesday. The actor hints that viewers will also learn that Alex didn’t know the real Sara.

“It’s a great twist and a new adventure for Alex to really question what he thought he knew,” Cardona teases to TVLine. “Sara is not the person Alex thought she was. And there’s a body in his garden. There are some more amazing twists that people are going to enjoy in Season 2.”

Just like viewers, Cardona says he’s grown addicted to the soapy thriller’s narrative curveballs. “Every time I read a script and it goes in a different direction, I get excited for the audience” he enthuses. “It’s very entertaining and it’s been an amazing journey.” 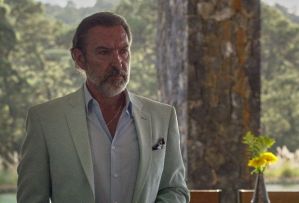 “The more layers that a character has, the more interesting they are,” Cardona says of Cesar. “[Ginés García Millán] is amazing actor and he’s doing an amazing interpretation of Cesar. The direction his character goes in Season 2 is going to blow people’s minds.”