The tension is definitely ratcheting up as Mare of Easttown uncorked its most explosive episode yet on Sunday — and sadly, not everybody survived.

With Missy now being held captive along with a very much alive Katie Bailey in a mystery man’s makeshift prison, Mare investigates her disappearance, chatting up a former hooker who had seen Missy around before. Mare also gets dolled up for a dinner date with Colin… but she only wants to talk about the latest developments in Erin’s case, and when Colin complains, she walks out on him. (We also learn that Erin’s friend Jess has been lying to the cops, and she and Dylan steal and burn Erin’s old journals — although Jess pockets a photo first.) Mare and Colin talk with another teen hooker who was almost strangled by a client, but fought her way free. She says the guy was white, he smoked Winstons… and she even got part of his license plate. 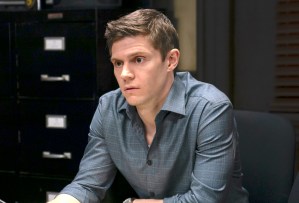 After Mare apologizes for ditching their date and Colin admits he didn’t solve the big Upper Darby case himself (he impulsively kisses her, too!), they start checking out matches on the license plate. They end up at the door of a guy named Mr. Potts, who runs a bar out of his house… and has Katie and Missy locked up in his attic. As the detectives enter, they spot a pack of Winstons on the table, which leads Colin to get his gun ready. The captive girls overhear them talking and start banging on the pipes, and Mare notices video cameras posted everywhere. As Colin starts to draw his gun, Potts pulls his first and shoots Colin in the head (nooooo!) before turning and firing at Mare. He hits her in the hand, but she manages to run upstairs and find the girls trapped in a room; she texts the cops while she bandages her bleeding hand.

Potts follows her upstairs and, thanks to the cameras, sees where she is. He fires wildly into a room, but she’s crouched out of the line of fire. When he turns around, she cracks him over the head with a heavy-looking tray and sprints downstairs. He manages to get up and fire more bullets after her as he follows her downstairs. She runs to Colin’s dead body and picks up his gun, whirling around and firing just as Potts appears, hitting him dead in the chest and killing him. She slumps down, bleeding and exhausted, as the cops pull up. One mystery down, one to go.

Elsewhere in “Illusions”: Mare talked about her depressed father in therapy, who took his own life, adding that she’s afraid Drew will end up like him and Kevin; a tearful Deacon Mark admitted to Dan that he saw Erin the night she died, but stopped short of confessing to her murder; Lori’s son Ryan told her that his dad John is seeing another woman again; poor Mrs. Carroll had a heart attack and died in a car crash… and then Mr. Carroll announced at her funeral that he’d had an affair with Mare’s mom Helen!; and Mare’s friend Billy revealed he actually took in Erin to live with him for a couple months after her mom died. Hmmm.

Alright, junior investigators: Drop your thoughts on Mare‘s latest twists in the comments below, along with your theories on who killed Erin.