The 1980s was a rough decade for Halston. Though it was a time full of excess, both personally and professionally, the designer was forced to reckon with the consequences of his choices, all of which came crashing down at once. (Surely, the loads of cocaine didn’t help much.)

But it was also during this time that a friend granted him a new opportunity, sparking fresh inspiration and helping him reclaim a part of himself he lost throughout all the contracts, kinks and clubbing. So, how’d it all end for Halston? Read on for highlights from the limited series’ finale.

We jump to 1984, where Halston is depressed by his new department store collection. The designer tells Sassy that critics hate him because they’re jealous. He asks her to read him a review, which calls the collection “a flimsy representation of his work.” In fact, none of the reviews have anything positive to say, and we can see the hurt strewn across his face. “Reviews don’t matter,” he says, but the look in his eyes says otherwise.

Fred asks for $1 million so he can fund his own work, but Halston isn’t having it. Fred then threatens to blackmail the designer, saying he will spill all of Halston’s dirt to the media. The argument turns physical before Halston kicks him out, but like an annoying fly, this is one problem that isn’t going away any time soon.

Epstein confronts Halston about his excessive spending, but the designer isn’t shaken one bit. He’s delivering the goods, but also trying to retain a modicum of his integrity. Epstein tells Halston he has a drug problem, and it’s yet another conversation that ends in a screaming match. 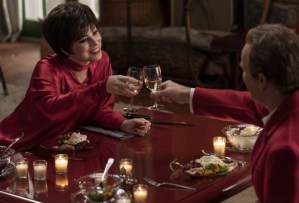 Choreographer Martha Graham tells Halston that while the critics aren’t in his favor anymore, he seems to have soured on himself. “I know what I am, I’m an artist. But I just care about the money at this point,” he says. “I want to make as much of it as I can, then just drive off into the sunset.” She tells him to seek inspiration in new places, then says he could design the costumes for her new production of Persephone. He doesn’t say yes right away, but he doesn’t decline, either.

As Epstein tells the board of directors he’s hit “rock bottom” with Halston, we watch the designer stumble into office furniture and frequently lose his train of thought. One morning, he finds a new hire, John David Ridge, has been brought on to help meet deadlines. The two men speak in private, and Halston calls it humiliating and “a betrayal.” Ridge tells him it’s a dream come true to work with him, and a little bit of flattery goes a long way. Halston scoffs when he hears Ridge is a costume designer from Broadway, but then second-guesses it. “Maybe you can help fix this… my name.” Is this the beginning of a beautiful partnership?

Halston forces Liza to read a scathing exposé revealing all of his dirty little secrets, from his cocaine use to his sexual proclivities. Victor has home videos of him, he tells Liza, who suggests he pay Victor off. Halston won’t hear it. “He already cost me so much,” he tells her, as we cut to him sitting in a doctor’s office.

“How long have I got?” he asks the doc. He decides to tell everyone he has liver cancer to hide his real diagnosis: AIDS.

Halston tells the board he quits. When Epstein says it would be a breach of contract, the designer tells them all to F off individually, in what must be the series’ most GIF-able, expletive-soaked scene. How Halston got his groove back, ladies and gentlemen! 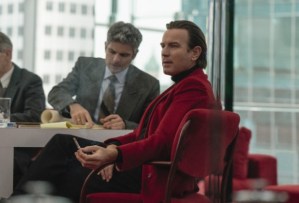 Later, his lawyer explains that S-Mart owns anything he creates for the rest of his life. Because he’s not Halston anymore. They are. “Well moving forward, next time I sign a contract, I’ll make sure to read it first,” he says. (Not a bad idea!) And though he plans to continue designing for celebrities, they cannot legally say they’re “wearing a Halston.”

Halston finally agrees to pay Victor off to make him go away. The former flame tries to make amends, and even pitches an idea for a new line. “I loved you,” Halston tells him before walking away.

In 1987, Halston visits Martha’s dance studio to ask if she’ll still have him. He then tells Ridge he’s looking for an assistant for his new project, which puts a smile on the protégé’s face. The two begin working on garments created entirely of ace bandages.

On Persephone‘s opening night, Halston reunites with Joe. The two bury the hatchet, flashing each other warm smiles, as Halston inquires about Elsa and compliments Joe’s latest work. He says he regrets selling his name, even admitting he’d pay twice what he originally received to get it back.

After the play, Joe and Halston read the reviews, which claim that the designs “steal the show.” Another writes that the costumes are “far too beautiful to be worn by mere mortals.” Lastly, the Times reports that the costumes are so good, the man should’ve started his career in the theater instead of the runway. “Well, reviews don’t matter,” Halston says with a sparkle in his eye. They toast the accomplishment anyway.

Liza is brought to tears when Halston announces he’s selling his real estate to move to San Francisco. In California, he finds peace staring out at the Pacific Ocean. He’s using a cane now, and looking a little worse for wear. He climbs into his car, and as the vehicle pulls away, he reminisces about his life and the wild journey he had. Eighteen months later in the year 1990, he passes away.

Did you enjoy Halston‘s swan song? Grade the finale and series, then weigh in below.