We all knew Stan was feeling some kind of way about Beth lately, but on Sunday’s episode of Good Girls, he finally confronted those frustrations head on.

But that chunky slice of marinating beef wasn’t the only drama served hot this week. Here’s what went down in the episode titled “Chef Boyardee.”

The episode opens with a police officer named Potter convincing his daughter that no one will ever break into their home and harm her. The same cop walks into a diner and asks a councilman — Nick! — if he has a minute to chat. But more on this later.

Dave and Phoebe meet with Beth to tell her that D.C. pulled the plug on their case. The agents speculate (correctly) that Rio has someone on the inside. That deal Beth and Dean had? That went up in flames, causing Beth to reconsider fleeing to Nevada or Thailand… anywhere that’s not Michigan.

When Beth asks Ruby if she still has fake bags to sell, Ruby tells Stan they should bring her in. She tells him the truth about Gene’s arrest, and not even Stan can deny Beth’s suave problem-solving skills.

Rio asks Beth to run a “little errand” for him. He wants his “funny money” back, so she calls up Phoebe to set up a playdate. Ruby rightly clarifies that breaking into a hotel room to steal federal evidence is a “kamikaze mission,” leading Beth straight back to Plan B: “That’s exactly why we have to get out of this town.” 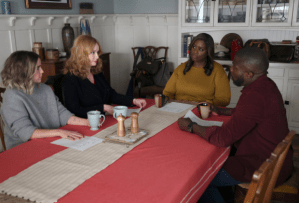 The women meet with Stan to go over their bag operation. Beth almost immediately tries to take control of the conversation. She simply cannot be a follower, but watching her and Stan attempt to tread lightly around each other is a hoot. Beth does find a flaw in Stan’s plan though. She worries that moms talk too much. And it only takes one individual to sniff out a knock-off and spread the word to their entire text chains of moms, which would be disastrous. “You got a better idea?” asks Stan. Of course she does.

Using dancers from the club, they attempt to force a private party of men to buy their lookalikes before the women will strip. Two men are about to open their wallets, until another flashes his badge. He’s a cop, and their scam is donezo. But at least they didn’t wind up in cuffs.

Phoebe goes to collect her case files and the man at the desk is Potter. Phoebe exits and Potter asks his colleague to fetch him something in evidence. “She was someone’s daughter,” he says. Cutting back to the diner, Potter claims he’s looking for MMA tickets for his daughter, but he’s really snooping around to find a connection between Lucy’s death and UFC tickets found at the scene. How did a murderer wind up with the city’s special box-seat tickets? Someone must’ve scalped them, Nick says. Looking to end the conversation, Nick says he’ll see what he can do for Potter’s daughter.

Annie tries to get financial aid so Ben could stay at his school, but because of her drug charge, she’s not allowed to apply. But if someone else shares her address, he can apply for the loan. Annie gets Kevin to fill out the paperwork, which he agrees to only if she’ll never come see him again.

Beth sells bags to the private party bunch by blackmailing them with a non-existent video she claims to have taken that night. When Stan finds out Beth made the sale, he’s immediately sour. She asks what his problem is and he’s blunt: “You.” He says her ego couldn’t take the hit. “You’ve been ignored for so long in your own home, and now all you want to do is matter. You use whoever you can to get whatever you want,” he seethes, adding that Beth was the one who got Ruby shot, among other things. Ruby re-enters the room and they quickly break it up.

With a chance to snag a job on a car lot, Dean tries to weasel out of his pyramid scheme, only his associate says Dean must cut him a check for the product. And not just the samples, but a whole garage-full of product. (Dean, how did you not see this coming, man!?) 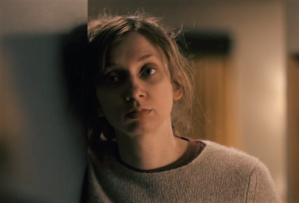 Beth brings juice and booze to Phoebe’s hotel room. They get liquored up, and when Phoebe steps into the bathroom, Beth finds the box of counterfeit cash and throws it out a window. Annie and Ruby are waiting outside to collect it, and as Annie babbles about old memes and “weather people,” Ruby admits: “My husband hates my best friend.”

Nick confronts Rio at the boxing gym about the tickets, speculating and confirming that Rio wasn’t actually at that fight. He was busy killing Lucy. “Sometimes I work weekends, bro,” is Rio’s only response. Nick drops a wad of cash in the ring and when Rio asks what it’s for, he’s grabbed and held from behind. “A doctor,” Nick says before bashing his face with a stool.

Kevin returns Annie’s paperwork, and says his car was destroyed by a downed electrical line. The good news: Ben can stay at his school! The bad news? They now have a roommate.

Potter returns home from work, calling out: “What smells so good?” But when he rounds the corner to the kitchen, Mick is standing there. “Chef Boyardee,” the killer-for-hire says. A spray of tomato-y goodness spills all over an envelope on the kitchen table — an envelope made out to Special Agent Phoebe Donegan. That piece of evidence probably won’t be landing in the mail any time soon.

In the episode’s final moments, Beth opens a gift left at her door. It’s a printing plate for a $20 Canadian bill. Their operation is apparently northward bound.

Meaty episode this week, Good Girls fans! What are your thoughts on Beth vs. Stan, Dean’s pickle and Potter’s unfortunate fate? Drop ’em in the Comments.