Warning: This post contains spoilers from The Underground Railroad.

Just as he has for both of Barry Jenkins‘ films, Moonlight and If Beale Street Could Talk, composer Nicholas Britell provided the sweeping and emotionally wrenching instrumentals for the Oscar winner’s new limited series The Underground Railroad, which is now streaming on Amazon Prime.

The strings that play in Episode 8 after Cora (TVLine’s Performer of the Week Thuso Mbedu) awakens from a dream in which she finally gets to say goodbye to her murdered soulmate Caesar (Krypton‘s Aaron Pierre), for instance, arrive courtesy of Britell. But when the episode closes after a frantic and ready-to-move-on Cora realizes Royal (The Good Place‘s William Jackson Harper) has gone out on a mission without saying goodbye, it’s Groove Theory’s 1995 hit “Hey U” that truly captures how Cora feels.

“I was thinking, ‘Oh, how was [Groove Theory’s Amel Larrieux] in 1995 singing directly to the heartache of this Black woman in 1855?'”  Jenkins marvels. “Spiritually, we’re connected as a continuum, and our ancestors — even living under the condition of American slavery — no doubt had longings and yearnings. This is one of the ways to connect us.

“There is a legacy from Cora to Amel Larrieux,” Jenkins adds. “It’s a straight line. And then we started chasing it. Every episode we wanted to find the appropriate way to draw that line and conclude this.”

Jenkins, who personally selected all of the end-credit songs, also witnessed that intergenerational symbiosis play out in real-life. “As we were editing the show, all these protests were happening in the streets because of the killing of George Floyd,” the auteur recalls. “And people were taking music from our last film, If Beale Street Could Talk, and using it to underscore some of the speeches that people were giving at some of the marches. And I thought, ‘This is interesting. We made this period film and people are using it to underscore this very contemporary happening.'” 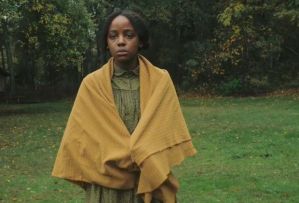 Other end-credit songs of note in Underground Railroad include The Pharcyde’s “Runnin,” when Cora has to escape Ridgeway’s (Joel Edgerton) grasp in South Carolina in Episode 2. And Childish Gambino’s “This Is America” at the end of Episode 9, when Ridgeway meets his inevitable fate at Cora’s hand.

“Sometimes, we create a distance between us and our ancestors and I don’t think we should,” Jenkins days. “That was the most important thing about adapting the book. There are times where we allow the actors, whether it’s the principal cast or the background cast, to look directly at the audience.

“And my hope is that the audience is seeing them, but, in a way, they’re also seeing us,” he concludes. “That’s the sort of channel of communication we tried to open. And if it felt haunting, that’s good. We need to continuously acknowledge and honor those folks.”