Lucifer returns with the back half of its penultimate season on Friday, May 28 — and here to start getting you amped up for those eight new episodes (as well as the Netflix’s drama’s final season) is OG cast member DB Woodside.

Season 5A left off with Amenadiel and Lucifer (played by Woodside and Tom Ellis) throwing down against Michael and a jaded Maze (also Ellis, and Lesley-Ann Brandt) after time mysteriously “stopped” at the cop shop — and just as Chloe (Lauren German) was nudging Luci to say those three not-so-little words! The celestial clash was cut short, though, by truly divine intervention in the form of God himself, played by Dennis Haysbert (aka Woodside’s 24 brother).

Here, Woodside hails that heavenly bit of casting, teases some of Season 5B (including his role in the musical Episode 10), and reflects a bit on the stalwart, twice-cancelled series’ legacy. 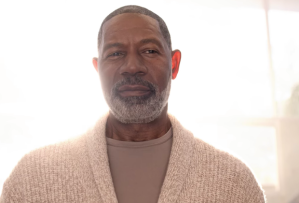 TVLINE | When last we tuned in, God just showed up on the scene. What’s that going to look like when Season 5 picks up?
Well, I think it’s going to be great. First of all, I mean Dennis Haysbert is just one of my favorites—

TVLINE | I love the brothers Palmer!
Yes! And it was important for me, as well as, I think, [supervising producers/writers] Chris Rafferty and Mike Costa, to have Dennis come join us for what we thought at the time was going to be our final season. And so,  the first thing that I have to say is I feel so incredibly honored that Dennis would come do the show; it’d been such a long time since he and I had been on the screen together. But when God comes, you know, a lot of chaos is going to follow. We’re finally going to dive into some of these storylines about the relationship between Lucifer and God, and the relationship between Amenadiel and God.

TVLINE | I was wondering if Amenadiel almost feels a bit mortified to be caught misbehaving, being the favorite son and all.
[Season] 5B picks up literally two seconds from where we ended, and yes, Amenadiel is absolutely embarrassed, humiliated that God saw him behaving the way that he was with his brothers because as the oldest [brother], he’s really supposed to be the one that sets the example, and he was not doing that.

TVLINE | Is God there just to break up a fight, or does he have other business?
Well, I don’t think he has to break up anything. I mean, he’s God, so his children are going to fall in line quickly! 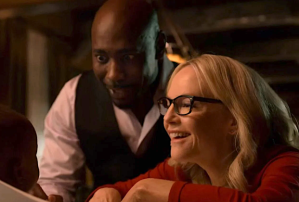 TVLINE | How disappointed was Amenadiel to find out that his and Linda’s son Charlie is just a regular mortal?
Well, he’s crushed. It’s taken a long time — what, a couple of millennia? — for Amenadiel to see humans as more than just pets, right? So to actually be faced with the idea that his own son, his own flesh and blood, might simply be a human is a lot for him. It’s something that he’s going to have to work through. But more than that, more than just his own embarrassment or his own expectations not being met, he’s scared, as he says, by the fact that his son will grow old, his son will be weak, his son will be a target. Those are things that would make any parent scared.

TVLINE | Is any fresh drama ahead for Amenadiel and Linda?
Amenadiel and Linda have developed a really beautiful friendship and have happened upon a great way to coparent. I think they’re friends forever, and I just love all that stuff with Rachael [Harris]. They’re definitely in for some more ups and downs of being a parent, but I don’t think Amenadiel could ask for a better partner than Dr. Linda. 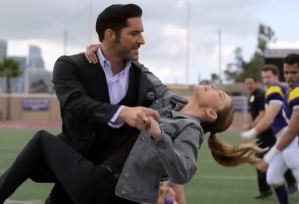 TVLINE | Is anything on tap for you specifically in the musical Episode 10 (“Bloody Celestial Karaoke Jam”)?
Oh, yes. I think that all I’m allowed to say for the musical episode is that Rachael and I have a duet. Amenadiel and Dr. Linda have a duet, which is going to be a lot of fun and surprise a lot of people. It brings me back to something that I used to do quite a bit in my youth.

TVLINE | Looking ahead to Season 6, you make your directing debut toward the end of that final season. What was the biggest challenge that the script presented to you?
I’m going to brutally honest with you. The biggest challenge is simply the fact that I had all of [the cast] all the time for my episode, and that’s a lot of wonderful people with big egos and big, lovely personalities. [Laughs] As a director it was different, because as an actor, if I’m in a scene with one of them or two of them, I’m just concerned about what I’m doing, right? I don’t necessarily have to take in the way that they might process something or the way that they might want to go about doing something, because I’m focused on what my character’s journey is. As director, I’m responsible for the entire vision, and sometimes actors can come to a scene with a very small point of view and not understand how they’re fitting into the big picture. Now that I’ve directed, I realize that I have done that in my past, and I would just like to publicly apologize to every director I’ve ever worked with!  I now understand more about what a director’s responsibility is.

Also, the days that were challenging were probably more challenging because working under these [COVID-safe] conditions didn’t leave us with a lot of time. All of the restrictions, like groups not being able to be there at the same time, cuts down dramatically on time, so you have less time to discuss things with actors. Sometimes you have to come in with a strong plan and just hope/wish/pray that they jump into that plan and trust you. But I will say that I think that I was probably on the lucky side because these beautiful people have known me for six, seven years, so it was a lot of fun and it’s something that I want to continue doing. 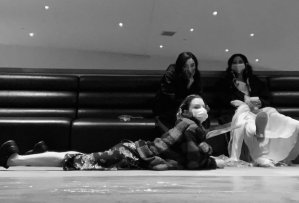 TVLINE | There was a stretch where Lesley and Aimee [Garcia] were tweeting out photos where it looked like everybody was dressed up for some sort of event, and I have to wonder if that was your episode….
That wasn’t my episode; I think that was Nathan Hopes’. Yeah, there’s a big event that happens in Season 6 and I definitely know I can’t share that, but I think it’s something that’s going to make the fans extremely happy.

TVLINE | Is there anything supernatural going on in your episode?
No, my episode is unlike any episode that people have seen. It takes place over one long night, and it’s everyone kind of sitting around talking and…

TVLINE | Oh, is it a bottle episode?
Yes. So, all I can say is that it was a lot of fun and I feel privileged to have received that episode, because I think you’re going to see some of the cast in ways that you haven’t been able to see them before.

TVLINE | What is the plan for Alias‘ Merrin Dungey in Season 6? Her character reportedly forms “an unlikely bond” with Amenadiel.
Oh, wow. Merrin quickly became one of my new favorite people. As an actress, as a human being…. First of all, she’s incredibly intelligent, and she has a fantastic wit. And the chemistry between her and I is off the charts, so I’m really excited for people to come check that out. She’s coming on as a police officer, so we’re going to dive back into — especially given everything that’s happened this past year while we were on lockdown, with George Floyd and Black Lives Matter — a bit about the police and issues that happen within the police department, and how good cops are trying to take on bad cops.

TVLINE | As we speak [in mid-March], you all are filming the series finale or are about to. What has that been like?
You know, it’s really sad [for us]. There’s just no other word for it. I mean, this show was counted out by so many people so many different times. To be in Vancouver for two years, I think, is probably the No. 1 reason why this cast is so close.

TVLINE | Vancouver will do that, yeah.
We’re fortunate that we all kind of get along and really like each other, but being up there in the dark and the rain — which I loved — forces people to lean on each other. Everyone’s away from their family and friends. And then to come back here to Los Angeles [for Season 3 on] was great. And then to be canceled [by Fox] and we all think it’s over, and then to be resurrected…. It’s just been a crazy ride.

Rachel and I have been bopping around [the industry] for a while, and we’ve been saying that this is a special show.  I think some of us are going to be somewhat shocked when they go to a “normal “show, which is why I think this one is so special for all of us, and if there’s really one thing that I have to say, it’s that I do believe all of us recognized that. This was a wild, beautiful ride, and I’m going to miss it.