The rise to the top can be filled with fame and excess, but once you best the rest, there’s only one direction to go from there.

In Ryan Murphy’s latest limited series Halston, Ewan McGregor (Fargo) portrays Roy Halston Frowick, a designer who took the fashion world by storm with his transcendent vision and Jackie Kennedy-approved headwear. Throughout the five-episode series (now available on Netflix), Murphy and McGregor track the icon’s rise and turbulent fall as Halston builds his world-renowned empire only to get consumed by the drugs, success and egotism that comes with it.

In the series premiere, we catch glimpses of Halston’s early life and witness how the genius behind the fabric made a name for himself that would be remembered in the industry forever. Read on for the highlights from “Becoming Halston.”

In 1938 Indiana, a young Halston makes a hat for his abused mom, and when we cut to 1961 New York City, the boy has become a revered hatmaker enjoying a boost in his business after Jackie Kennedy name-drops him. But his early success is short lived. Seven years later, Jackie stops wearing hats, affecting both trends and sales.

Halston meets Ed (The Looming Tower‘s Sullivan Jones) at a bar, but introduces himself as “Eric,” a falconer (interesting choice for a fake occupation, aye?). They connect through their mutual feelings as outsiders, and the exchange leads to a steamy hook-up. Halston eventually reveals his actual identity. “I made hats to lift my mother’s spirits,” he tells Ed, leading to a quick flashback of his mother telling the young boy he’s “far too special for this place.” 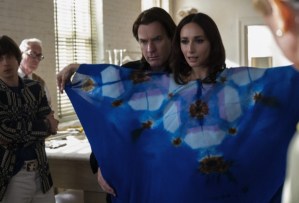 “What are you going to do? Women don’t wear hats anymore,” asks Ed.

Halston has a plan. He’s going to follow the model that Ralph Lifshitz (read: Ralph Lauren) used, only bigger. Halston pitches his new idea to his contact at Bergdorf Goodman: The designer wants to dress women from head to toe in his brand, providing “a complete custom couture experience.” The executive seems iffy, but suggests he start by making some dresses.

His first exhibit flops when nothing sells, but Halston remains unflappable. “I was brilliant. They’re the dummies,” he tells Ed.

“What we need is to figure out your signature,” he’s told by Joey Eula (Law & Order: SVU‘s David Pittu), who eventually becomes Halston’s creative director. After talking shop, the men take in a show performed by Liza Minelli (Daybreak‘s Krysta Rodriguez), and after a riveting number, the men meet her backstage. Halston says he thinks she needs a new look, and over drinks, she tells him that inspiration is going to find him. “You and me are both living under the shadow of something,” she says. “I don’t want to be just Judy Garland’s daughter, just like you don’t want to just be Jackie O’s hat maker.”

Later, Halston tears up some fabric, using Liza as his new muse. “Now… that’s a Halston,” he says, beaming at his new creation.

Halston begins scouting real estate for his future showroom. His friend and interior designer Angelo tells him that what he wants to do costs money, but Halston is a persistent fella. After some time, he puts his whole team in place. Joey will be his illustrator, Italian model Elsa Peretti (Celeste & Jesse Forever‘s Rebecca Dayan) will don the clothes, while Joel Schumacher (City on a Hill‘s Rory Culkin) will handle the window presentations. Now, it’s on to the financing.

Halston Limited will be picked up by every reputable department store, he tells an investor named Mrs. Marsh. “I’m going to change the face of American fashion, and it will all be because of you.” He asks for $1 million. She offers him $100,000, but he has to hire her son Michael, too. He graciously accepts. 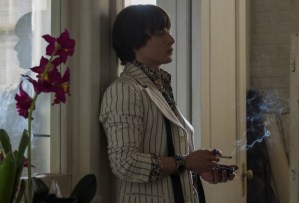 As the team gets to work, Halston quickly feels the pressure, barking orders at Joel and trashing one of his designs. A suede jacket gets wet, and though that’s an obvious issue, the cut and look of the piece works. Halston continues biting Joel’s head off, asking if he thinks he’s earning his title of Junior Partner. The poor guy quickly scampers.

Later, Halston catches Joel doing speed in the bathroom, and asks if he needs to be worried. Joel says no, but asks, “I don’t belong here, do I?” Halston tells him he’s very talented but there’s too much at stake, and he’s got to get clean. They agree that if Joel quits the drugs, Halston will stop biting his head off.

Joel then tells him he has something to show him. It’s a dyed piece of navy blue fabric, which sparks Halston’s creativity. He makes a few quick cuts and slaps it on Elsa. It’s dazzling. Soon, models strut down a runway wearing fabulously dyed garments that make heads turn and cameras flash. Halston is greeted with a round of applause, though he’s underwhelmed when the official reviews come out.

Halston tells Joel that it takes just one sophisticated socialite to change everything… and he just got off the phone with Babe Paley. At the meeting with Babe, she expresses interest in something she can wear every day. He introduces her to ultrasuede — a new synthetic he made that you can throw in the wash, wear casually or dress up. She orders one in every color.

Was McGregor’s turn as Halston a smashing success? Grade the premiere below, then fire away in the Comments!