Hope Mikaelson might be the first character in television history who was actually relieved to catch her boyfriend sneaking off to see someone else in the middle of the night.

The paranoid tribrid kicked off Thursday’s Legacies by tailing her boyfriend during one of his midnight outings, only to learn that he’s been getting yolked with Jed. She even threw in a casual “Do you even lift, bro?” just to show how totally not freaked out she was. That is, until she noticed how much weight her sweet Muppet prince was able to haul.

Fully convinced that Landon was no longer himself, she tested her theory by treating him to a post-workout snack of avocados, which should have caused him to break out in hives. When they didn’t, she knocked him out with a sleep spell, recruiting Cleo to figure out who — or what — he really is. And while Landon was surprisingly game to fork over a blood sample, the only fluid he was able to draw from himself was Malivore mud.

Desperate for answers, Hope jumped straight to Plan Z, putting a few drops of her blood onto Landon to see how he would react. Nothing happened… until he suddenly started melting, then regenerated and tried to kill her. After spotting some familiar writing on his shoulder, Hope was able to put the pieces together: This faux-Landon was actually a golem, a living version of the clay bust she made of Landon earlier this season. Or as he was more than happy to explain, “Everything you remember about Landon has been imbued into my being, and my very being is made from his remains.” Gross?

Fortunately, we didn’t have to wait very long to find out who’s been pulling the strings, as Cleo was almost immediately revealed to be faux-Landon’s puppeteer. “You know nothing of who I am,” Cleo told Hope after jabbing her with a spear. “I am merely forcing you to live up to your potential, to fulfill your destiny as the one who is able to open the artifact, to kill Malivore, to free me!” She was apparently trapped in the artifact for centuries, and now she wants nothing more than for Hope to trigger her vampire side.

Then came yet another big, semi-confusing twist. That dude with the skull mask showed, knocked out Cleo and revealed himself to be… the real Landon!

* Against her better judgment, Josie helped Alaric locate the now-human Necromancer, who scoffed at the notion that he could be anything more than a humble funeral home worker named Ted. Josie began to suspect that her nemesis might really be gone, until she heard one of his classic catchphrases. (“He just bah’d! No one genuinely bah’s except the Necromancer!”) With his powers restored, the Necromancer revived Leonardo da Vinci (NBD!) for info on the artifact, but the Salvatore School’s utter lack of Italian speakers (not to mention Wi-Fi) made for a pretty nasty language barrier. Of course, all of that became a moot point when Cleo used a spell to trap them all in Alaric’s office. Freeing them required the Necromancer to sacrifice himself, and because Alaric called him Ted in his final moments, he was able to go in peace.

* After healing Ethan with his blood, MG made the ill-advised decision to tell his new bestie about all things supernatural, including just how “gifted” the Salvatore School’s student body really is. Within minutes, Ethan was begging MG to turn him into a vampire. And even after MG explained what a terrible idea that would be, Ethan swiped his daylight ring to prevent him from killing himself with vampire blood still in his system. (D’oh!) So MG did what any aspiring super-vamp would do — he threw on a makeshift costume, Jesus-jogged across the quarry and stopped Ethan before he got a chance to jump. Then came what felt like a break-up, as MG wiped Ethan’s memory of their adventures, of the supernatural world, and of his desire to hurt himself. (Right before MG compelled him, did anyone else think they were going to kiss? No? Just me? Figures.) 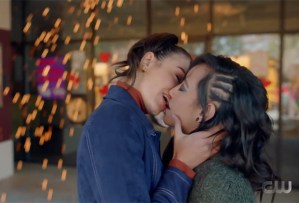 * Lizzie skipped town for a wiccan wellness retreat, but not before leaving her sister a note about Finch’s true nature. More conflicted than ever (and with absolutely no one else to turn to), Josie received some simple words of wisdom from the Necromancer — sorry, from Ted — who encouraged her to tell Finch how she feels while she still can. Working at a funeral home, he’s seen his share of heartbroken mourners whose deceased lovers can no longer hear them. So she took his advice, told Finch that she likes her and (plot twist!) invited her to enroll at the Salvatore School. “I think I can find the courage to come back if you come with me,” Josie said, leading to a kiss so powerful that it caused literal sparks to ignite overhead.