It’s no secret that stand-up comedy has long been a boys’ club. Not only does a talented female comic have to work twice as hard to reach the top, but once she’s there, she’s got to grab tight and hold on.

Such is the premise of Hacks, HBO Max’s latest comedy (two episodes now available), which explores the twisted mentorship that forms between legendary Vegas comedian Deborah Vance (beloved TV legend Jean Smart) and her new writer, entitled 25-year-old Ava (relative newcomer Hannah Einbinder). When the women are down on their luck and desperate, their mutual manager partners them up in hope of saving their flatlining careers. That is, if they don’t kill each other first.

When we meet Deborah, we’re dazzled by the bird’s eye view of her lavish life as a Vegas mainstay funny-woman, as she gallivants from the stage to the screen in her role as a QVC saleswoman. Her career and life seem so posh and exuberant, that is, until she gets home and takes her wig off. As she walks around her mansion alone, we catch the first traces of loneliness.

She later meets with casino owner Marty (Harry’s Law‘s Christopher McDonald) for dinner, as the two celebrate her 2,500th show, a Vegas record. Though Marty is thankful for the revenue she’s brought in, he suggests doing less shows a year to make room for some new acts. She’s immediately filled with rage when she learns she’s getting bumped from Fridays and Saturdays, the two hottest nights of the week. She makes a huge scene on her way out of the restaurant, screaming loudly as she steals Marty’s steak (and fork!), and falsely announces that she found a cockroach in her salad. 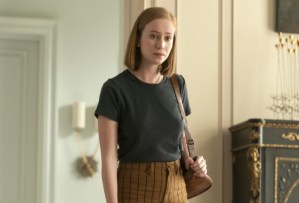 In Los Angeles, “unfiltered and honest” writer Ava is in hot water because of (what else?) a tweet. Her manager Jimmy (Broad City‘s Paul W. Downs) tells her she needs to lay low, mostly because no one wants to work with her. Mid-meeting, Deborah calls. She’s still irate about her cut dates, leading Jimmy to make a pitch, hoping to quell both women’s troubles at the same time: What if Deb hires a writer? She’s appalled at the suggestion and promptly hangs up.

Jimmy tells Ava about his idea. “The QVC muumuu lady? Didn’t she, like, burn her husband’s house down?” she asks. She says she’s “not that desperate,” but Jimmy begs to differ.

Deborah gets a call from her sister prompting her to shout: “How the hell did she get my number?” On the news at that very moment, she learns her ex-husband passed away. Their divorce was a high profile, tabloid-worthy affair, but Deb seems to pay the news no mind. Her COO Marcus suggests she take the night off, but she goes right back to work, delivering a joke that sadly falls flat.

Ava arrives to Deborah’s, though the stand-up is still unaware of her arrival. Marcus convinces Deborah to meet with Ava, and surprise! It does not go well… at first. After a brief interruption from Deborah’s daughter (played by It’s Always Sunny‘s Kaitlin Olson), Ava fakes that she’s a big fan, prompting Deb to ask her what her favorite joke of hers is. Naturally, Ava doesn’t know a single one of the 30,000 lines Deborah has written and performed, and before long, the charade is up. Deborah insults Ava’s clothing, while Ava takes jabs at Deborah’s decorating and the fact that she searched her grown daughter’s purse for drugs. Ava barks that the last thing she wants to do is write jokes for “some old hack,” and calls her a “classist monster.” She says Deb doesn’t have to check her bag because she’ll be sure to leave a stool sample on the lawn on her way out. Savage!

Ava’s last retort gets a belly laugh out of Deb, so she follows the writer to the door to ask what joke got her canned. The tweet revolved around a closeted senator who was sending his son to conversion camp despite the fact that he had been caught with a male escort prior. Shortly after, trolls dug up tweets from the past, and voila! Ava was cancelled. Deborah slams the joke for being bad, causing Ava to fire back: “I am starting to see why your husband left you for your own sister now.” Ouch!

As Ava cruises down the looong driveway, Deborah ferociously trails her, nearly running her off the road before Ava can leave. Deborah approaches Ava’s car and offers a replacement for the senator quip, and the two go back and forth, workshopping the joke. (They land on: “The senator has been in the closest so long, he s–ts mothballs.”) Deborah then gives her the gig and tells her to write 20 jokes by morning, leaving Ava absolutely stunned.

Here are a few noteworthy happenings from Episode 2: 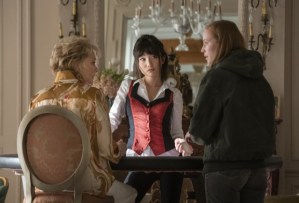 *Deb asks Ava if she’s a lesbian, prompting the writer to go on the longest tangent ever on the history of her sexuality (she’s bi), causing Deborah to respond with this bit of gold: “Jesus Christ! I was just wondering why you were dressed as Rachel Maddow’s mechanic.”

*After Deborah helps a cappella superstars Pentatonix get a high-profile gig elsewhere (one that includes not replacing her at the casino), Marty retaliates by promoting Deb’s show with an all-you-can-eat advertisement that includes the comic’s head on a crab.

*Ava’s material is getting better, but Deborah still hasn’t used any of it. Ava says it’s hard to write in Deb’s voice since she doesn’t know her. Thus, the two head out on a road trip to procure a $10,000 pepper shaker from an antique dealer Deborah’s comically warring with.

*When Ava tells Deborah she’s making their working relationship hard, the comic tells her that even if you’re great and get lucky enough to make it, you still have to work really hard, and even that isn’t enough. “You have to scratch and claw and it never f–king ends. And it doesn’t get better, it just gets harder. So don’t complain to me that I’m making your life hard. You don’t even know what that means.” Then she gets picked up in a helicopter. Go figure.

*Deborah is pleasantly pleased that Ava was able to procure the pepper shaker, and tells Ava that she was right. They do have to get to know each other. She brings Ava to a room filled with 40 years’ worth of tapes, binders, files and more, all containing every single joke, show and appearance material Deborah has ever performed. She tasks Ava with digitizing the entire lot.

Will Deborah and Ava learn to get along? Grade the premiere episode below, then tell us your thoughts in the Comments!