It’s the moment we’ve all been waiting for: During Thursday’s B Positive finale, Drew and Gina go under the knife for Drew’s kidney transplant — and while we don’t know whether or not the surgery will be a success, the events that preceded it set the stage for a hypothetical Season 2.

So, what went down before the anesthesia set in? Read on to find out…

At the start of “Life Expectancy,” Gina tells Eli that she’s decided to find her own place after the transplant, rather than move back in with Gabby. “I’m not sure the party lifestyle is my thing anymore,” she says. “You can only snort coke with a busboy in the IHOP parking lot so many times before it loses its glamour.” She doesn’t have a plan, but she has some time to figure it out. In the meantime, Eli invites Gina to move in with him, but she declines. The relationship is new, and she doesn’t want to mess things up by rushing into anything.

Back at home, Drew has prepared Adriana a sampling of Swiss delicacies ahead of their trip to Switzerland, where Adriana is set to undergo an experimental cancer treatment. She’s thoroughly impressed, but she can’t stay. She tells Drew that she’s on her way to the airport; she’s decided to go to without him. As amazing as it’d be if Drew joined her, Adriana refuses to let her boyfriend delay his transplant for two months. She assures him they’ll resume their relationship once she returns. 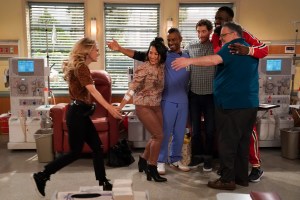 The following morning, Drew attends his last dialysis appointment. He’s going to miss these sessions, as crazy as that sounds. Jerry, Eli and Gideon have become his closest friends. Heck, he’s even grown fond of empath Megyn, who’s only been in dialysis for a week. Before Gina arrives for a celebratory group hug, the men encourage Drew to buy his donor a gift — something to thank her for her sacrifice.

Afterwards, Gideon accompanies Gina to see an apartment. It’s a bit of fixer-upper, but “everything’s fine,” she says. “Couldn’t be better.” Within seconds, Gina finds herself in the throes of an identity crisis: “I don’t know who I am. I know who I was when I was with Drew, but after tomorrow, I’m not going to be Gina the Kidney Donor anymore, and I don’t want to go back to being Gina the Party Girl. And I don’t want to be Gina the Van Driver anymore… I don’t know who I’m supposed to be, and I don’t know what I’m supposed to do.” Gideon doesn’t sugarcoat it — “Change is hard,” he says — but this is a chance to start fresh.

Back at the house, Drew’s ex-wife Julia drops in to wish him good luck ahead of his big day. She also tells him that Gina’s generosity has inspired her to consider donating one of her own kidneys. Maybe she’s a match for Eli or Jerry? Whoever gets it, it’ll look good on her Tinder profile. Before she goes, Drew asks Julia for any tips on what gift he should get Gina. She tells him to get something from the heart — but if he can’t think of anything, diamond earrings will do.

Drew and Gina have difficulty sleeping the night before the transplant. He tells her that he almost didn’t go to their mutual friend’s wedding where they reconnected; if he hadn’t gone, his life would’ve been completely different. “I wouldn’t have gotten you, moving in here, driving me crazy,” he says. He then gifts her a life-changing keychain: It’s a key to the house. He wants her to stay. She humbly accepts and tells Drew that he’s given her life new meaning. 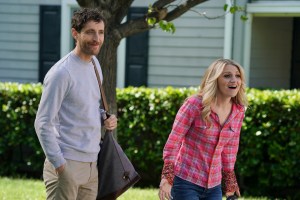 A few hours later, Drew presents Gina with a second gift: A limousine to escort them to the hospital. Paul is outside to capture the moment, then follows them into the surgical unit, where they’re greeted by Gabby and the entire dialysis group. We then see a montage of well wishes from everyone in Drew and Gina’s respective orbits, including Norma, who’s in Italy with her daughter.

Before Drew is wheeled into surgery, he stops and tells Gina that he loves her, and she reciprocates. It’s platonic, but very sweet. We then cut to Drew and Gina in separate operating rooms, where they’re told to count backwards from 10.

What did you think of B Positive‘s finale — and Season 1 overall? Do you have every finger and toe crossed that it’s renewed for Season 2? Weigh in via the following polls, then hit the comments.