Oscar winner Barry Jenkins doesn’t want his new limited series The Underground Railroad to get lost in the debate over how and when Black trauma should be shown.

When all 10 episodes of the Amazon Prime escape-from-slavery drama premiere this Friday, the Moonlight director says he hopes viewers keep in mind that it is based on Colson Whitehead’s Pulitzer Prize-winning book of the same name. And although the series, like the novel, includes a graphic scene where an enslaved Black man is casually and inhumanely tortured for attempting to run away, Jenkins says the scene has a purpose.

“It is one of the more horrific events in the book. But it’s also an engine in the book,” Jenkins tells TVLine. “Faced with a brutality that is so extreme, Cora [newcomer Thuso Mbedu], who in certain ways has given up hope on herself, changes her mind when Caesar [Aaron Pierre] comes in, and they both say, ‘This is too much. We have to risk everything now.'”

“It’s not just that they realize that it could happen to them, but it’s that they realize that they can’t believe these things are allowed to happen,” he adds. “It felt important to honor the book and present this same sort of event and try to do it as ethically and morally and respectfully as we could, but also to present it.”

Jenkins says historically, Black people have been brutally tortured and killed, and acknowledging past atrocities helps put into context the police brutality against Black people that keeps happening now. 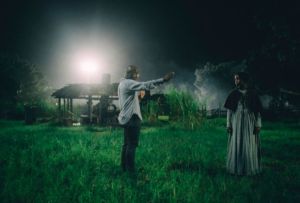 “In my research, these things happened and much worse,” Jenkins says. “I remember in high school or college seeing images of lynchings, and you often see the aftermath. Because of that, it almost decentralizes the person who this happened to, and so it felt like going from the book to the screen, it was important to be very honest and just present it as these things happened.”

Tackling such brutalities also allowed Jenkins to pay homage to Black people who had to survive slavery as well as confront those who refuse to address the institution’s crippling impact.

“To me, it was an acknowledgement of the struggle and the things that our ancestors had to endure,” Jenkins reveals. “You can’t shy away from it, and I try not to make anything based on responses and reactions or out of spite. But, for the four years that I was working on this show, I kept hearing the slogan, ‘Make America Great Again.'”

“And if you’re talking about this idea of making America great again, you’re willfully not acknowledging what America was, and in some ways continues to be,” Jenkins concludes. “And now as someone who is in control of a certain kind of language, it was important for me to be like, ‘OK, this is the greatness you’re yearning for us to return to.”