All season long, Bishop and his Santo Padre Mayans have thought they were at war with their fellow charters. But, as evidenced by Mayans MC’s Season 3 finale on Tuesday, there’s a much more serious battle looming, and it makes the events of the past few weeks look like a game of Risk.

Before you tell us what you thought of the season ender — not series ender, fortunately, as Mayans has already been renewed for Season 4 — let’s revisit the highlights of the harrowing, super-sized episode.

IT’S JUST A SHOT AWAY | Having already solved their Ramos problem, the Santo Padre Mayans now have their sights set on killing Canche, president of the Yuma charter, leaving Bishop as the sole king. The plan: One of Santo Padre’s female bartenders will bring her car to an auto repair garage that Canche and his men frequently meet at, claiming the car is making a weird noise. In the trunk, though, will be a bomb that EZ, Angel and Gilly can remotely detonate from their phone, which they’ll do as soon as Canche is inside the garage.

But perhaps sensing that a trap is being set for him, Canche also brings his young son to the garage, briefly derailing Santo Padre’s plan; Angel, at least, is adamant that they call the whole thing off before they murder an actual child. EZ, though, is all too aware that this is the club’s only chance to take out Canche, and he takes a peek around the front of the garage to make sure Canche’s son is safely away from the car before he detonates the bomb. Just when the boy appears at a safe distance from the vehicle, Canche turns and seems to lock eyes with EZ through the garage window, prompting EZ to frantically detonate the bomb and run away. That night, Tranq announces to the group what he’s heard: Canche’s son survived the blast, but Canche is dead, and they all raise a glass to Bishop, newly crowned Mayans royalty.

Later, Tucson charter prez Ibarra — who set all this in motion weeks ago when he requested Santo Padre’s help with getting heroin into prisons — meets with the other Mayan presidents, suggesting that all the charters move on from this mess peacefully. “We forgive each other’s trespasses. We move forward,” Ibarra says, and Oakland president Diaz finally, slowly nods in agreement with Ibarra’s proposition.

As Ibarra is about to end the meeting, Diaz reminds him he can finally put his kutte back on, and Ibarra happily turns around so Diaz can put the vest on him. But the mood in the room is heavy, not celebratory, and Ibarra is about to find out why: “F—k your trespasses, and f—k your king,” Diaz says while Ibarra’s back is turned, suddenly shooting Ibarra in the head. And just seconds before he does? None other than a not-dead-at-all Canche arrives and stands in the doorway. (Reader, I gasped.)

Meanwhile, as all of this is going down, Taza is busy trying to keep Laura safe after she got an unexpected visit from El Palo. In the interest of skipping the minutiae, I’ll jump to the good part: Laura shoots and kills El Palo before the episode is through, saving Taza in the process (before tearfully demanding that Taza leave her alone for good). But despite the relative victory of El Palo’s demise, Taza is still burdened, and he decides to return to Santo Padre HQ and finally confess to Bishop that he killed Riz all those months ago, not the Vatos Malditos.

Bishop seems rightfully furious at Taza’s news, and Taza gets it: Having already presented his gun to Bishop before he even confessed, Taza gives Bishop the go-ahead to shoot him right there if he pleases. After all, Taza’s tired, and he’s worried about whatever deal El Palo set in motion with the Yuma charter, having realized during his earlier confrontation with El Palo that the man was suspiciously wearing a Yuma kutte. 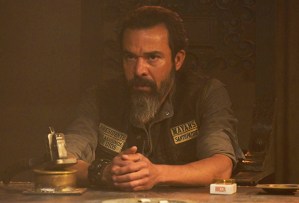 At the end of the episode, we join EZ on the steps of Santo Padre’s clubhouse, looking pensive. Suddenly, a gunshot is fired nearby — perhaps Bishop killing Taza, though we don’t see the source of the noise — and moments later, Molotov cocktails start flying over the closed gate to the clubhouse. Suddenly, the gate gets rammed by something large on the other side. EZ slowly approaches the gate as Molotovs keep landing around him, and he readies his gun — but that will be no match for the angry mob of Mayans, from multiple charters, standing on the other side of the gate, brandishing guns and yelling as they try to bust through to Santo Padre’s turf.

* Prior to all of that madness, EZ plans to leave club life behind for good and go north with Gaby, who has taken him back. They’re positively giddy as they get ready to depart Santo Padre… but when Gaby reveals to Felipe that EZ is coming with her, Felipe begs her to go on without his son. “If anything were to happen to you, I wouldn’t be able to take it,” Felipe tells Gaby, reminding her that EZ is broken and will only pull her down as he drowns. Gaby ultimately heeds the man’s advice, leaving a note for EZ that references his story of St. Francis: “Ezekiel — When summer returns and the roses bloom.”

* Despite their orders from Galindo, neither Alvarez nor Nestor go through with killing EZ — and by the end of the finale, that’s the least of Galindo’s concerns. Remember those two protégés of Adelita’s who were arrested when they tried to stab the governor? Well, they told the Mexican authorities that it was all part of a murder conspiracy orchestrated by the Galindo organization, and the feds are coming to get Galindo, like, right now. He’s only able to get away in time because Potter (hey, he still exists!) warns Galindo of the imminent legal trouble, and Galindo manages to fly off in his helicopter before the agents find him.

He won’t be joined by Emily, though: Having pieced together that Galindo tried to hurt or even kill her, Emily takes her son and heads to her sister’s house, leaving Galindo with only her wedding ring and the remaining prescription pills that he didn’t mix into her wine the night before. (As blindsides go, this is a pretty epic one. Props, Emily.)

* Speaking of Potter, a vengeful Adelita tracks him down, having gotten his location from Anna Linares. “Don’t believe a f—kin’ word he says. Everything’s a play with him,” Anna warns Adelita. And when a cornered Potter reveals to Adelita that her infant son is not, in fact, deceased, Adelita breaks down in tears, seemingly unconvinced that Potter is telling the truth.

* Despite his initial reluctance, Gilly finally heads up to Meth Mountain to rescue Coco — and when Coco, at long last, shoots Isaac in the neck, he’s able to take Hope home with him, too.

OK, your turn. What did you think of Mayans MC‘s season finale? Grade it in our poll below, then drop a comment with your full reactions!