Hang onto your hats, Supergirl fans. The midseason finale, airing this Tuesday (9/8c, The CW), is going to push the Super Friends to their limits as they attempt to rescue the Girl of Steel from the Phantom Zone.

“This is definitely the most intense episode of Supergirl that I’ve been a part of,” Jason Behr, who plays Kara’s biological father Zor-El, tells TVLine. “It seems like all hope is lost and yet, there is that little kernel, and they’re all racing against the clock because the Phantom Zone is crumbling before their very eyes.”

With time running out and the gang set to face the darkest corners of their imaginations, they’re going to have to pull from deep within if they ever hope to make it out alive. It’s a familiar battle for Kara and Zor-El, who both experienced their own internal tribulations while stuck in the prison-like dimension. 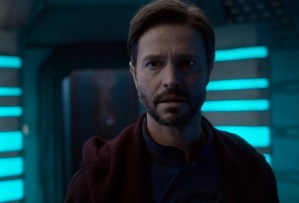 “The idea behind the Phantoms is that when they come into contact with you, all of your worst fears and nightmares are real, and you see the worst of your imagination come to life. All the Super Friends experience something like that,” Behr explains.

“The thing with Zor-El is, he’s a man who is broken and has no hope. It’s only through his daughter’s spirit and tenacity that he starts to feel that hope again… The glyph that they both wear on their chest is a symbol of hope, and it’s really difficult to keep that hope alive in a place Like the Phantom Zone. But it’s only through Kara’s will and spirit that Zor-El is inspired to look for a way out.”

Behr’s stint in Supergirl marks a full-circle moment for the actor, who made a name for himself on some of the WB’s most recognizable shows.

“It is kind of funny thing to think about, that in the late 90s, I went on this string of WB shows. I started off in Buffy the Vampire Slayer, and then I went to 7th Heaven and Dawson’s Creek, and then finally to Roswell,” he shares. “It does feel very full circle and apropos that I started back on this little run here with Roswell, New Mexico and now Supergirl.”

When it comes to the next Warner Bros. show he’d like to dip his toes into, Behr already has one in mind: “I feel like there is a certain cousin in Smallville that can always use a little visit,” he adds. Whether or not Zor-El will actually make the trek to Superman & Lois, however, remains to be seen.

Are you prepared to see the Super Friends face their deepest fears in the midseason finale? How are you feeling about the season so far? Let us know your thoughts in the comments below!