Marvin “Krondon” Jones III, who plays the evil genius, did an especially convincing job of making us believe that he could tickle the ivories like that. Alas, he cannot.

“Tobias can play ‘Sympony No. 5’ and I can play like I am playing,” Jones tells TVLine with a chuckle. “One of my biggest dreams in life is to be able to play like that. I always told myself, when I got the time and the means, I was going to take piano lessons. I have this wonderful job but one thing I don’t have as much of is time.”

“I didn’t have time to venture into that world like I wanted to,” Jones adds. “But, I had a great guy on set with me who gave me some great pointers … and they used his hands.”

Piano playing aside, Tobias is orchestrating a lot of mischief and mayhem for the Pierces, including having one of his henchmen kill JJ’s (Laura Kariuki) potential boo thang Uriah (McKalin Hand). Tobias was also elected mayor of Freeland this week, which means he’ll have more power and the police force on his side to make life a living hell for the family of superheroes he wants to destroy. 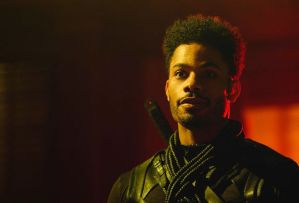 By the end of “The Book of Reunification: Chapter Two,” Tobias learned that his former employee Khalil/Painkiller (Jordan Calloway) is coming to settle the score and take him down. What he doesn’t know is Khalil is going to use Looker (Sofia Vassilieva) to do the deed.

The CW hasn’t officially announced whether it’s picking up Painkiller, but Jones is hopeful that if the network goes forward with the sequel series, Tobias could have a place in that world as well.

“Tobias is a huge part of Painkiller’s origin story, so I hope that he sticks around, but I don’t know,” Jones says. “But the CW has shown us nothing but love, so I’m excited and open to play whatever they want me to play. Painkiller is an exciting spinoff, and I’m happy for Jordan Calloway. He deserves all the best.” 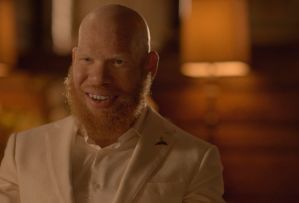 Until Painkiller and Looker come for Tobias, he’ll be enjoying his time as Mayor Whale — a position that called for the fatal ousting of Mayor Billy Black (Girlfriends‘ Reginald C. Hayes).

“In Season 4, you finally see the fullness of Tobias as a villainous, highly intelligent and self-deprecating character,” Jones says. “Now you have a greater scope of his maniacal strategy in politics as we play with those nuances. He’s a very nuanced character.”

“But because he’s the Mayor, there’s no more Reggie. Shout-out to Reggie,” he says respectfully. “Working with him was an honor. I’ve been a big fan of his since I was coming up watching him work in the 2000s. He’s an extremely generous and naturally funny actor. I hated to see him go. But you know on our show, no one ever really dies. So this might not be the last we see of Reggie.”