Fran Lebowitz and Gloria Steinem are not Karens. And they are not among the 55 percent of white women who voted for Trump in 2020, either.

But in the same way that people of color are sometimes asked to explain the misdeeds of their brethren, the eponymous host of Ziwe (Showtime’s new chat and sketch show debuting Sunday at 11/10c) challenges the feminist thought leaders to break down white women’s racial privilege. Their answers, in turn, create a back-and-forth that is sometimes funny, occasionally awkward and always thought-provoking.

At one point, Ziwe gets Lebowitz to comically compare herself to Martin Luther King Jr., and later self-identify as “the great white hope.” Although, Ziwe isn’t intimidated by either woman, it doesn’t mean she wasn’t a bit scared that things could’ve gone south.

“We’re on this Earth for a very limited time, so I personally need to make art that moves me, that makes me a little afraid,” Ziwe tells TVLine. “This interview doesn’t feel safe and that’s what entertains me — like, that’s what would get me to watch it. My comedy has to feel fresh and it has to surprise me. But I am afraid, and that’s kind of why I do it. I’m always pushing the boundaries, trying to get that fix.”

Thanks to the magic of editing, sometimes Lebowitz feels like she is in on the jokes and sometimes it doesn’t. But Ziwe applauds the literati icon’s openness during the four-hour interview, which was pared down to 20 minutes for broadcast. 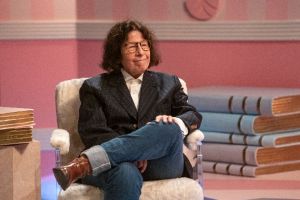 “She was in on it in the sense that she came to that interview from a place of honesty. Fran put it all on the table,” Ziwe elaborates. “I asked her which was worse, ‘slow walkers or racism,’ and she asked if that was a real question before answering ‘slow walkers.’ But that’s an honest answer. She was bringing herself to the interview, and so was I.”

Ziwe also pulls no punches when it comes to Karens (such as in a segment with real white women bearing that name) and white feminism (mocked via a catchy musical number titled “Lisa Called the Cops on Black People”). Ziwe’s approach is so candid, in fact, it feels like she’s exposing conversations and perceptions Black women have about white women that are only shared among themselves.

“We are socialized to never speak about race, especially not on-camera and especially not for your professional living,” the comedian divulges. “I wanted to really subvert these conversations. Every single person I know can relate to being cornered at a bar and someone white is talking to them about their ‘Black friend.’ And you’re like, ‘What are you talking about?'” 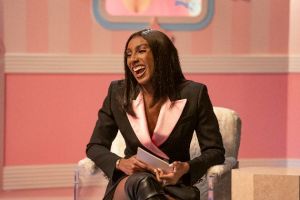 “I wanted to bring that sort of awkwardness and absurdity on-screen, in a way that translates so that people can realize how truly wild it is,” she adds. “That’s what my comedy aims to do. And sometimes I’m successful, and sometimes I’m not. But that’s definitely the aim.”

In a future installment, Ziwe challenges anti-Asian hate and classism with the respective help of Saturday Night Live‘s Bowen Yang and Shrill‘s Patti Harrison. (There’s even a brilliant musical number where she and Harrison snobbishly instruct people to “just don’t be poor.”) Another episode features broadcast journalist and reality star Eboni K. Williams, who has an unexpectedly wicked sense of humor.

“Eboni was such a delight; I had no idea how hilarious she is,” Ziwe reports. “She was talking about being big-breasted and I was like, ‘OK, we’re really peeling back the layers.'”

“Overall, that’s the way I would describe my guests — unafraid. Even if they are nervous,” Ziwe concludes. “That is such a great characteristic to have, and I’ve been so thankful to each and every one of my guests for coming onto my show unafraid to have these really public conversations, and not being afraid to look silly. That is a blessing, and every one of them is brilliant and beloved to me.”