Dynasty returns to The CW tonight (9/8c) after breaking for a literal calendar year, and even though Elaine Hendrix admits that she “needs a flow chart to track what’s going on,” she also insists that Season 4 was well worth the wait.

“I think, completely unbiasedly, just looking at the material and the vibe, this truly is the best season,” Alexis Carrington-Colby’s portrayer tells TVLine. “The cast has settled, we’re all very tight-knit, and the writers have had to get really creative because of the pandemic. There’s a lot more personal interaction between the characters. There isn’t as much of the glitz and glam to distract from that. But at the same time, it’s still Dynasty — the clothes are better, the cars are better, we’re all flying high.”

Dynasty‘s fourth season is loaded with major life events for the Carringtons, beginning with Fallon and Liam’s long-awaited nuptials. But while Fallon will almost certainly veer into bridezilla territory, Hendrix insists that Alexis will be on her best behavior. Sort of.

“Alexis loves her kids, and she fights so hard for them,” Hendrix says. “At the same time, she can’t help but make things about her. She always thinks she’s helping, and in her way, she is. It may not be what’s actually best for other people, but by golly, she’s trying. She’s both the best of the worst and the worst of the best.” 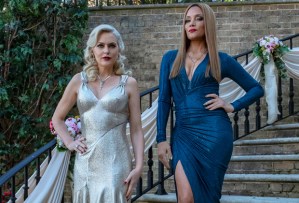 The new season will also introduce some unexpected bedfellows, including Alexis and Dominique, a dynamic Hendrix is excited for the audience to enjoy.

“Michael [Michele] and I are great friends off-screen, which helps, because we have a mutual respect and trust in one another,” she says. “I don’t mean to draw any direct parallels, because we’re obviously so different, but it will probably be the closest to the original [dynamic] between Joan Collins and Diahann Carroll.”

And while Dynasty is (mercifully) excluding all mentions of COVID-19 from its new episodes, Hendrix has a pretty good idea of how Alexis would fare in quarantine.

“Alexis would still do everything in high style,” she says. “I have to wear a mask? It’s going to be diamond encrusted. I have to shop from home? I’m going to have clothes flown in from wherever I possibly can. But at the same time, I wonder if she would have even taken it seriously? And I hate to say that, because I definitely did, but you never know with someone like Alexis.”

Your hopes for Dynasty Season 4? Hit PLAY on the video below for a taste of what’s to come, then drop a comment with your thoughts.