The following post contains spoilers for Prodigal Son‘s May 4 episode.

Christian Borle‘s final day on the set of Prodigal Son involved a game of bowling and the sudden demise of his character, Friar Pete. But only one of those moments was actually fun to film — and it wasn’t the bowling.

“I’m going to be honest,” Borle tells TVLine with a sigh. “I got to bowl [on set]. There was only one set-up. And I’m a pretty good bowler. I average about… 135? 140? Which isn’t terrible! There’s a few strikes and a couple of spares in there.

“But when I actually got to bowl,” he continues, “the whole crew is watching, and I had a fantasy of stepping up to the line, and I have pretty good form, and I’m like, ‘Oh my God, here goes nothing.’ And I bowled a one, a gutter ball, and then another one. I was mortified.”

Borle’s scene in the New York City bowling alley came after Friar Pete and two of his fellow Claremont inmates, Martin Whitly and Hector, broke out of the psychiatric hospital, only for Bright to track down Friar Pete mere hours into his escape. What followed was a violent confrontation between Pete and Bright, in which Pete threw a bowling ball right at Bright’s head — Bright dodged it, thankfully — then pointed a gun at him before Pete was fatally shot in the head by U.S. Marshal Emily Ruiz.

Below, Borle details his feelings about Pete’s “blaze of glory” death scene, reflects on his reunion with onetime Masters of Sex scene partner Michael Sheen and teases the only way Pete could feasibly return to the show.

TVLINE | When you first signed on to the show, did you have any idea how Pete’s arc would ultimately end?
It was a surprise. And of course, because he goes out in a blaze of glory, it was a happy surprise. I was having such a good time, I was hoping they would give him some sort of reprieve. But I think Pete has served his purpose.

TVLINE | It’s funny you say blaze of glory; I sorta wanted Pete to have a flashier death than a single gunshot. But I take it you weren’t disappointed?
I wasn’t, because I was more excited about the technicalities of the stunt aspect of it. Once we got into the nuts and bolts of what that was going to look like and feel like, the suddenness of it — and the dropping like a sack of potatoes — was really fun to do. Of course every actor wants to have some prolonged, dramatic death scene. But this saved me the trouble of having to watch myself really overact. I watched myself overact enough. [Laughs] So maybe it was a blessing.

TVLINE | Your final scene is very long, very intense, and it’s the first time we’re seeing you outside Claremont. What was it like to film?
The real joy of it was being in civilian clothes, because the institutional [clothes] don’t fit very well. I would spend every waking hour as Pete hiking my pants up. So the first part of it was relief. We worked a very long day, and the crew is a well-oiled machine. We were working under COVID restrictions, so people were working efficiently. I blew my voice out a little bit with that one big, overact-y choice. You do that over and over again, but I was so gratified that they let me get away with it. [Laughs] And then it was a lot of falling down on pads. But I don’t often get to do that type of thing, so I was just enjoying every second of it. And Tom [Payne] is such a generous actor to work off, as well. Watching my performance through his eyes was entertaining.

TVLINE | You also had to throw a bowling ball quite a few times, I’d imagine.
The bowling ball that I had to hurl at Tom was a light rubber stunt bowling ball, in case I hit him. And the holes were actually a little shallow — [Laughs] — so I couldn’t get a good grip. The outtakes of me hurling that ball at him are embarrassing. All in all, just an embarrassing day at Prodigal Son.

TVLINE | When we first met Pete, he was much more mild-mannered than most Claremont inmates. But by the end, he’s furious, exploding with rage. In your mind, what were his true motivations in wanting to escape the hospital?
My general take on him was that he was basically a charlatan. I don’t think he believed anything that he was espousing, especially on the faith front. Once he’s out and about, that’s the true him. And he probably knew that Malcolm was going to track them all down — he knew this was it, basically. There was a certain inevitability to it. He’s just angry. I don’t think he’s as insane as he pretends to be. I think insanity’s probably the thing that kept him out of prison. 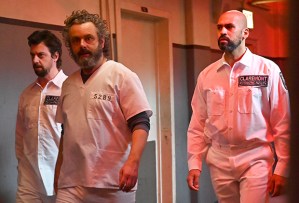 TVLINE | You’ve got a background in theater, and it was so fun to watch you sing to Catherine Zeta-Jones a few weeks back. Had you spoken to the producers about getting to do that, or was it a pleasant surprise?
You know, I did a few episodes, and then I didn’t know if I would ever come back, and they were so kind to ask me back. Once they did, they just started throwing ridiculous things at me. And [the singing] was just one more ridiculous thing they came up with. I did not request that, but I was very happy to do it… The only hope for Friar Pete is that there’s some kind of dream musical episode, and they bring everyone who’s been killed back to do a big number.

TVLINE | On a show like this, I don’t think that’s out of the question.
[Laughs] Yes!

TVLINE | You had also previously worked with Michael Sheen on Masters of Sex. What was it like to share scenes with him again, especially when you’re not playing brothers this time?
It’s such a different tone. For Michael — and I can’t speak for him — but he was an executive producer on Masters of Sex and had so much responsibility, and was so focused on that set. I think this is probably a little more fun, maybe? For him? It was a really lovely reunion. He’s just so prepared and focused, and I like to be very prepared, as well, so we fell into a very nice rhythm. We would exchange a couple of pleasantries in our chairs and then just get down to business. It was a delight working with him.

TVLINE | Now that Pete is off the show, are you privy to anything that happens in the final two episodes?
That is above my pay grade, as they say. I’ll be tuning in with everyone else.