If you watched the premiere of Peacock’s new musical comedy Girls5eva, that means you likely have a certain catchy earworm stuck in your head which just might remain there 5eva.

Their single “Famous 5eva” was a hit in 1999, but fame did not actually last 5eva. Bareilles’ Dawn is now a wife and mother who’s in the middle of her first mammogram when she hears the familiar track sampled in rapper Lil Stinker’s new song. Dawn visits their creepy ex-manager Larry (Veep’s Jonathan Hadary) to collect her measly royalties and gets suckered into hand-delivering the rest of the checks to her former bandmates. First up is the sweet-but-dim Summer (Philipps), whose boy band husband Kev (Black Monday‘s Andrew Rannells) only comes home from his job in Florida on “the 31st of every month that has one of those.” Meanwhile, formerly closeted Gloria (Pell) is a successful dentist who has the honor of being half of the first gay couple in New York state to get divorced. Then there’s Wickie (Goldsberry), a “fempire” mega mogul who abruptly left the group and oozes fabulousness with every word. 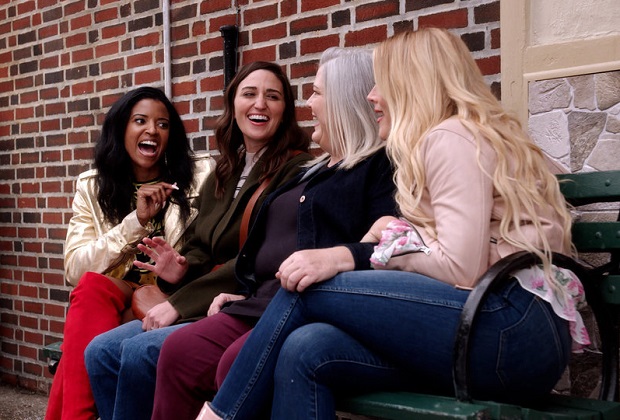 When Lil Stinker books an appearance on The Tonight Show, Girls5eva is called to perform alongside him. Even Wickie agrees to the reunion, shocking her jilted bandmates. The high of hitting the stage again gets the ladies thinking that they should tour with Lil Stinker, but he doesn’t want the reminder of how transient fame is. Then Larry informs Wickie and Dawn that the music industry has closed its doors to women over 35.

After breaking the bad news to Summer and Gloria, an angry Wickie rushes off during the middle of dinner. Dawn, however, refuses to be abandoned by her friend again and confronts Wickie in her… very basic hotel room. Wickie’s glam Instagram is actually a complete lie — I’m positively shocked, I tell ya! — and the life that she felt she was owed because of her amazing voice never actually materialized. Wickie doesn’t even own a jet; she works at the airport, shooting geese. But airports aren’t all gloom and doom: When a TSA agent recognizes the group (and gives Wickie a pass on having to drink her water bra), Wickie realizes that she and her pals don’t need Lil Stinker or Larry to reenergize their lives. The Girls5eva reunion is officially on!

What did you think of Girls5eva? Grade it below, then hit the comments with your thoughts and favorite lines!