At a glance, the “will they/won’t they” between Poppy and Ian on Mythic Quest is one of the workplace sitcom’s main draws.

But take a closer look at the undeniable chemistry between Dana (Imani Hakim) and Rachel (Ashly Burch) on the Apple TV+ offering, and there is no doubt that this is the relationship most worthy of fans’ attention. And when the series returns for Season 2 this Friday, May 7 with two new episodes, the questions surrounding their potential romance will finally be answered, Hakim teases.

“I personally haven’t seen a same-sex ‘will they or won’t they’ dynamic on any show before, especially with women of color,” Hakim thoughtfully tells TVLine. “I feel like when I see any sort of LGBTQ relationship portrayed on TV, it’s usually overly sexualized, or they’re in an already established relationship. But this is really cool to see, and Dana and Rachel are kind of like the Ross and Rachel or the Pam and Jim of Mythic Quest. And it’s very normalized and innocent, which I really like.”

Season 2 will also explore Dana and Rachel’s personal and professional aspirations beyond their current stations as game testers. “We will see more of Dana and Rachel’s dynamic, but we also get to see them more independent of that unit than we did in Season 1,” Hakim shares. “We’ll really get to dive into these characters’ traits that we set up last season. We get to know more of who Dana is without Rachel, and I’m really excited about that.” 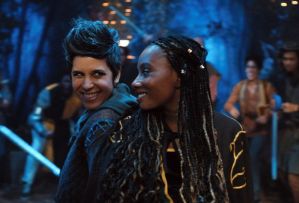 “There was a little of that in the bonus episode ‘Everlight,’ when Dana really showed up for herself,” Hakim adds. “That side of Dana isn’t seen very much. ‘Everlight’ went through so many different iterations compared to how we saw it on screen. There was a draft at one point where Dana does win. In fact, there were different drafts with different characters winning. But I really loved seeing Dana trust herself because she’s young, and she’s at that age where she is discovering who she is and what she wants, and she’s building her confidence. That episode was a great example of her leaning into that. And she’s not chewing on her braids anymore. She’s growing up.”

Hakim, who is best known for her role as Tonya, the annoying little sister of the title character on Everybody Hates Chris, is also all grown up now and welcomes playing an adult character with more layers. 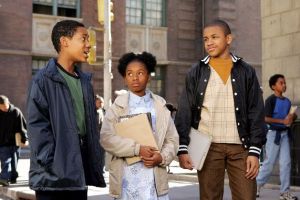 “I even have those moments where I’m like, ‘Oh s–t. I’m a woman now,” the Cleveland native says with a chuckle. “So much time has passed, and I really feel the need to connect with fans who loved Everybody Hates Chris. I feel so much gratitude for having had that experience. And it’s a reflection of where I started and where I am now. I really enjoy it.”

But people evolve, and Hakim has, too.

“On Mythic Quest, Dana is the most grounded character, and that resonates with me. In my friend group, I bring the same groundedness,” she continues. “On Everybody Hates Chris, I was a child, so I didn’t get that much of a character arc to play with, but this is great. I have a collaborative relationship with the producers and the writers, and we’re creating Dana together.”

Although Mythic Quest hasn’t directly addressed Dana’s race in the past, there will be more moments in Season 2 where her Blackness is centered or, at the very least, strongly embraced. In Episode 4, for instance, Dana tells Rachel (who is half Thai) she has to “work twice as hard to get half as far.” Rachel has no idea what Dana means, making the moment comical but poignant. 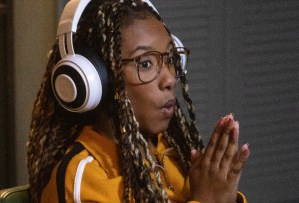 “They weren’t looking for a Black woman to play this role,” Hakim recalls. “They cast me because I fit the character. But I like that Dana can exist in this space without having to announce that she’s a Black woman. At the same time, it’s something you will see acknowledged more in Season 2.”

“She is a Black woman in this predominately white space,” she concludes. “We don’t have to hammer it home, but we’re also not going to ignore it. That’s actually one of my favorite things about it. I came into this audition with these blond twists in my hair, and I got the role, and the producers said, ‘Don’t change your hair. We love your hair.’ And as a Black woman, that felt good because I don’t get to see any women on TV showing this much personality with their hair in this type of space. She’s a gamer, and it’s so authentic because she’s rocking her hair in a protective, practical, Black girl hairstyle, and it’s normalized. I’m so excited that other Black girls can watch me and see themselves and know that this hairstyle is appropriate for the workplace and we can wear our hair like this.”