Kim Burgess just took a crucial step forward in her adoption of Makayla. This week’s episode, titled “Trouble Dolls,” saw the Intelligence detective make the important decision to declare a custodial guardian — someone who would care for the young girl in the event that anything ever happened to her.

After a heart-to-heart with Platt, Burgess called Ruzek over to ask if he would be that person for her. Confused at first (given that they haven’t seen eye-to-eye in recent weeks), Ruzek accepted the offer thus ending their brief falling out. Though this doesn’t mean the pair is back together romantically, it does drive home the fact that they’ll always support each other no matter what they’re going through. 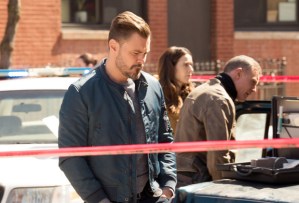 “I honestly don’t think it changes their relationship,” Marina Squerciati, who plays Burgess, tells TVLine. “Adam is no longer super furious at her. I think that they still have a ways to go before they’re a couple again, and I don’t know what that looks like. It feels like there’s so much mistrust and misunderstanding between them right now. I don’t know how we get back to a relationship, but no matter what, we’re family.”

Having Ruzek as a safety net for Makayla lifts a huge weight off Burgess, who struggled during the hour to juggle her responsibilities as both a police officer and a mother. Makayla had trouble sleeping due to nightmares about her past trauma, and began dozing off in class. On the job, Burgess hesitated to return fire during a shootout with a suspect. By the end of the episode, however, Burgess found ways to mitigate those struggles by comforting Makayla with a Trouble Doll to help her sleep and securing Makayla’s future after declaring Ruzek her custodial guardian.

This doesn’t necessarily fix things — it’s still a complex situation — but it does give Burgess the mental space to compartmentalize her dangerous job with being a present and loving mom at home.

“I think the balancing aspect of being a working mom will always be present,” Squerciati explains. “In order to be a mom cop, you have to leave that behind when you walk into the fire so I think that naming the guardian was a way to put that fear to bed. Not naming the guardian and having someone to fall back on was what made her hesitate in the line of fire.” 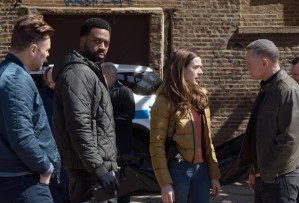 In addition to Burgess’ struggles with motherhood, Season 8 also tackled police reform through the introduction of Deputy Superintendent Samantha Miller (played by Nicole Ari Parker), who pushed for sweeping changes throughout the department. According to Squerciati, the final two episodes of the season will be a “cliffhanger episode” and a “cliffhanger finale” that deal with the overarching issue.

“While Voight has been going along with it, I think it’s been more of a struggle for an old school cop breaking the Blue Wall,” she says. “I think that the writers are doing a really great job in these last two episodes to show the old school cop struggling against reform and the changes that need to be made.”

Squerciati is fully aware of her job as a TV cop at a time when cop shows are being scrutinized for the way they portray police amid real-life police brutality. Leaning into Chicago P.D. as an expression of art, she says that they also “have a responsibility, especially in Chicago, where there are a lot of issues that need to be resolved within the police department.

“I think that not mentioning it or dealing with it on the show would be irresponsible. [Showrunner Rick Eid] has brought it to the forefront, especially with episodes featuring [Atwater and Ruzek], so it’s important that we do address it. It’s not perfect, but we are addressing it… It would be hard to turn a blind eye to all the things that are happening right now.”

“Voight is an old-school cop,” she concludes. “He started this show very differently, so to just have him change immediately would not be true. I think it’s important to see that struggle as well as show how much further we need to go.”

Want scoop on Chicago P.D., or for any other show? Email InsideLine@tvline.com and your question may be answered via Matt’s Inside Line.