This Tuesday on The Flash, it was time for Frost to own up to her metavillainous past. In the end, did she lose her powers, or only her freedom? Also this Tuesday, the Speed Force done snapped!

First things first: As “Killer” Frost was put on trial for her crimes of the past, it was revealed that the prosecution aimed to punish her, if found guilty, by forcing her to take Cisco’s meta cure. While Frost insisted on not meddling, Caitlin, Allegra and Cisco privately plotted to sneak into the CCPD and use an oxymizer somethingoranother to neutralize the stored stash of the cure. And despite a brief scare when Kramer bumped into Allegra, they pulled it off.  Alas, Kramer’s discovery that the CCPD security cameras had been hacked  and that the cure had been tampered with  did Frost’s case no favors — even after Caitlin confessed to the judge that she  orchestrated the scheme.

After a heart-to-heart with her Caitlin (who was not ready to lose the “sister” she had grown to love), followed by a meet-up with Kramer (who revealed  that her Army unit had been betrayed by/lost lives due to a meta, ergo her ruthless drive), Frost took the stand in court and requested that she punished with life in prison, without a chance for parole.  Kramer stood up and balked, but Cecile savvily made her eat her past words, which claimed to only want Frost unable to harm people. The judge supported Frost’s request, and after a series of sad hugs from Caitlin, Cisco et al (as well as supportive words from old Snake Eye guy), Frost was led off to the hoosegow. 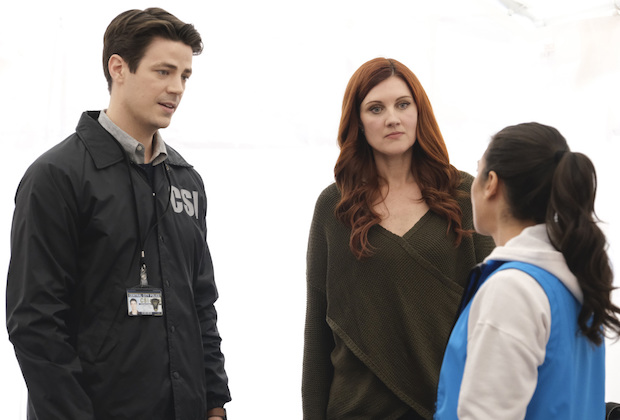 Elsewhere this week: The team was alerted to seismic signatures suggesting that Fuerza aka the Strength Force was back in play, somewhere in Keystone City. With Iris running comms, Barry let Speed Force Nora accompany him to check things out, and they eventually were led to a mild-mannered Alexa Garcia. Alexa insisted to Barry that she was not a meta, but when later nudged by The Flash (who himself was nudged by an overtly assertive Speed  Force), she agreed to go to STAR Labs for a  look-see. There, Barry ran a test that everrrrr-so-sliiiightly triggered the Strength Force within Alexa, confirming everyone’s suspicions.

No sooner did Barry reassure the distraught lass that everything would be OK, Speed Force brutally zapped Alexa with lightning. Arguing that Barry should be focused on protecting it and not the Strength Force, the Speed Force next lobbed a blast at Iris, knowing that Barry would block/match it with his own powers. Barking like a WWE wrestler that though Iris is “your lightning rod, I am the lightning!,” the smug af Speed Force took the “ball” of combined powers and hurled it at Alexa, presumably killing her  — as a horrified Barry and Iris looked on.

What did you think  of “The People V. Killer Frost”?