Chicago Fire‘s Stella is just hours away from her lieutenant’s test on this Wednesday’s episode (NBC, 9/8c) — but her last shift before the big exam will be the real test.

“What isn’t Stella going through?” her portrayer Miranda Rae Mayo says of the firefighter’s hectic day on the job. On top of the “stress” of prepping for the professional assessment, Stella is also dealt two unexpected challenges. First, a rescue leads Stella to suggest “an unconventional idea” in order to save an impaled civilian, which is both physically and mentally demanding. Then back at the firehouse, Stella gets a mysterious call. “She doesn’t know who it is. It’s kind of muffled when it comes through, and she doesn’t think much of it, and it turns out to be a dire situation,” Mayo previews. “So then we see her, essentially, trying to navigate some type of help with very little information.”

While Stella has saved many lives in her line of work, this particular call for help will require her to tap into a different set of skills, ones that don’t come as easily to her. “I don’t think this is a strength of hers,” Mayo admits. “I think that’s one of the reasons she and Severide work so well is because she knows how to compartmentalize her emotions.”

But hearing the terrified voice on the other end of the phone can’t help but bring up “uncomfortable” feelings for Stella as she desperately tries to locate the caller. “She really wants to just give this person very clear directions: ‘Just do this. Go fight your way out of the situation, or call the police,’ and it’s so much more delicate,” Mayo says. “So we see Stella really getting vulnerable, and we watch it in real time.” 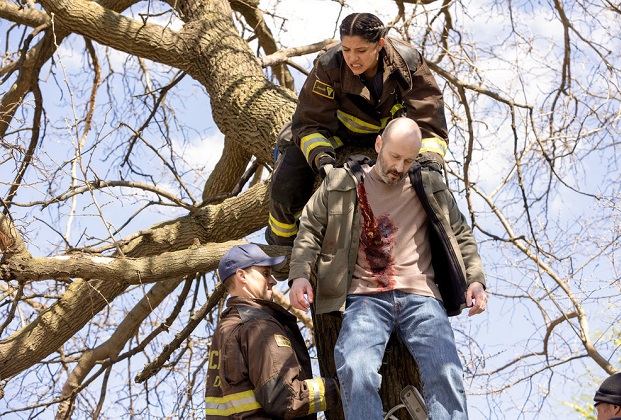 Inspired by the radio drama Suspense and the installment Sorry, Wrong Number, showrunner Derek Haas sought to answer with this episode the question of, “Can we keep the audience riveted to the end of their seats at the same time you’re basically in a room?” he shares with a laugh. And for Stella, “what we wanted to do was just throw everything at her,” Haas adds. “Even the first accident call that she goes on, she’s the central figure, and it’s exhausting, it’s grueling. She’s studying, and then the suspense and the conflict of this phone call, and trying to solve this is all just piling up.”

Upon learning everything that was in store for her character, Mayo’s first reaction to the eventful hour was “terror,” the actress reveals. “It was really such a big deal to me that our showrunner wrote an episode where I was the main storyline. I’ve never had that before on this show or on any show, and the fact that Derek took the time to write it himself was really exciting to me. It really meant something to me. I got on the phone with him, or I texted him right away and was like, ‘I really don’t want to disappoint you,’ which is very Stella. I want to show up.”

Much like Mayo, her onscreen alter ego also comes away from the intense experience with the realization “that she’s capable, that she can do it, that she is a leader,” Mayo describes. “Everybody’s been kind of telling her, ‘You have great potential. You work hard. You’re a leader,’ and there’s been a part of her that thinks that maybe that could be true, but not yet… I think walking away from this situation, she is holding her head high, saying, ‘Wow, I guess I am a leader.'”

Press PLAY above to watch an exclusive sneak peek, then hit the comments with your thoughts!