This week on NBC’s Debris — after MI6 agent Finola Jones took a few trips of her own through the reality-rewriting time loop — she realized that to set things right, she and CIA agent Bryan Beneventi (along with Kathleen and her brother Shelby) needed to synchronize watches and make one final “jump” together at the exact same time.

With that done, we next saw Finola and Bryan once again pull up to the Oceanside, Wash, overlook and once again comment on the sea/faint Laghari levels, before once again knocking on the door of a nearby home, where they were greeted by Shelby… who similarly had been reunited with Kathleen.

Meaning, everyone returned to their original, proper reality! “Or did they…?” asks cast member Riann Steele, who plays Finola.

Elaborating a bit on that provocative tease, Steele told TVLine, “This is one of those situations where in Episode 13 (aka the season finale airing May 24), the last scenes that were redacted will tie that up.”

When asked about the finale’s “redacted” scenes, Steele explained, “We didn’t get them until the very last minute. And I think that on the day we were filming, we were the only few people that knew” what those scenes were about.

Steele said that she as an actress had elected to remain in the dark up until that time, whereas costar Jonathan Tucker preferred to know where things were heading. “Jonathan has had long conversations with [showrunner] Joel [Wyman] and knew probably a lot more than I did, because I made a decision to literally go episode to episode, script to script, and learn in real time as much as Finola knows,” she said. “It wasn’t until that I got to the end that that all tied up and a lot of questions were answered — in a way that you didn’t expect.” 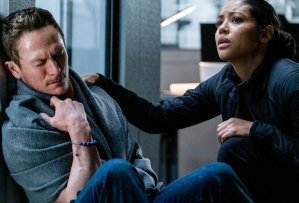 Tucker and Steele in the May 10 episode

Previewing the rest of the sci-fi drama’s final three Season 1 episodes, Steele said that coming out of this two-part time loop arc, “there is an interesting shift” between the two agents, who in recent weeks have covertly been collaborating under the noses of their MI6 and CIA bosses who are working at cross purposes.

“The Finola you meet in the beginning [of the series] is full of optimism and hope and faith, and Bryan is like ‘the numbers guy.’ He’s here for a different reason,” Steele noted. “But there is a shift coming, and suddenly we find that Bryan has a new lease on understanding the debris and understanding of his purpose.” Finola meanwhile “suddenly begins to be afraid at exactly what is happening and the world that they are now entering into, and what this all means. And that, I think, is going to be a really interesting shift between them.”