In last week’s Good Girls, Beth took a major step when she finally met the boss’ boss and left behind a wiretap while at it. (What is it they say about playing with fire again?)

Though she seemed to leave a good first impression with Rio’s grandma, we know Beth won’t be climbing the criminal corporate ladder that easily, nor will she soon rid herself of Secret Service agents Phoebe and Dave. What’s a girl to do when she’s continuously caught in the middle? Keep playing both sides. Here’s what went down in Sunday’s episode titled “Carolyn With a Y.”

The women are lined up in front of Dave as he quizzes them like a condescending parent. He thinks Beth’s been “screwing the target,” and he’s not happy. She tries to deny it, but of course, a wire doesn’t lie. (For anyone dying to know the juicy details, they didn’t go all the way, but there were definitely some bases rounded.) Hanky-panky aside, the wire in Grandma’s bedroom is still hot, thus, the operation is still a go.

At the Hills, Stan has one major rule when it comes to their fake bag game: Beth can’t know about it. She makes everything about her, he says, so he wants her nowhere near his new ploy. Seeing as Beth doesn’t tell Ruby everything (like the deets about her steamy hookups, for example), Ruby’s game to keep this on the DL.

Annie meets Gregg for coffee, and learns he wants to pull Ben out of his swanky private school. After Taylor Swift herself shows up to one of Ben’s friends’ birthday parties, the two parents decide they don’t want him growing up thinking the rich lifestyle he’s surrounded by is actually real life. (Though Annie is curious about the setlist for Tay’s impromptu performance. Girl’s asking the right questions here!)

Rio tells Beth they’ve got a problem. He pulls out one of the John Grisham novels, putting Beth on instant alert. “Grandma’s pissed you missed dessert,” he says. He needs something done, and it can’t be done by Beth, Ruby or Annie, and it has to be completed by a mom. Enter Phoebe. She may not have any kids, but she does have some professional skills that may help her pull off this particular undercover assignment. The women help the agent get up to speed with her new mom persona. They teach her that kids’ ages under two are always reported in months. They smash cereal in her purse and claim that “now, it’s a mom bag!” They are infuriated when the agent refers to “pickup” as “school pickup.” After the hilarious prep montage concludes, Phoebe’s ready for action. 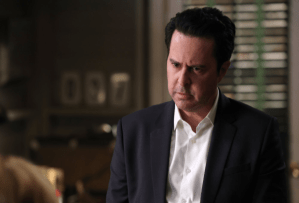 The women plus Phoebe (now going by “Carolyn with a Y”) meet Rio at the diner. Dave planted ears inside a salt shaker on the table, but when it comes to talking shop, Rio (of course) wants to relocate… to Carolyn’s house. They pull up to a house in the ‘burbs, and when Phoebe tries to play like she can’t find her keys, Rio bangs loudly on the door. Dave answers in a bathrobe, feigning annoyance at the disruption.

Rio plays with their minds a bit before telling “Carolyn” he’s going to bring her a duffel bag, and she’ll need to hang on to it until he needs it again. She’ll earn a holding fee in return. Rio exits, and the women think it’s finally over. They’ve got him talking on a wire, right? Dave re-enters to burst everyone’s bubble. He didn’t have time to wire the house he borrowed. The cat and mouse game continues!

Later, Stan is peeved that Ruby bailed on their scheduled scheme of hawking the handbags. While he does earn some quick cash, he worries he didn’t make enough to appease Gene.

A chat with Ben helps Annie deduce that Nancy and Gregg are having money problems, hence the real reason Gregg wants to pull Ben from school. This information shouldn’t make Annie squeal in delight, but it does. Who can blame her when she’s had to deal with Nancy’s never-ending condescension these last few years?

Ruby asks Annie and Beth if they can spare six g’s. She begrudgingly tells them about her and Stan’s operation, causing Beth to ask why she didn’t tell them before. Beth worries that if the Secret Service finds out about Ruby’s side hustle, it could affect the deal they have on the table.

In his car the next day, Rio asks Beth point blank if Carolyn is a fed. Unsurprisingly, he did find the wiretap. Beth reaches for the door handle, but he tells her to stop and open the glove compartment instead. “Hand it to me,” he says. That “it” is a gun, but instead of capping Beth, he places it in a special compartment hidden behind the center console. Rio and Beth then bring Phoebe the duffel bag, but when she brings it to Dave, they find $300 worth of costume jewelry inside. “You blew it, Carolyn,” Dave says.

Gene is impressed by how much money Ruby and Stan raked in, but instead of giving them a cut, he says he’s reinvesting the profits into their new company… and he doesn’t want to let them out. Back in their car, Ruby’s officially had it. “That fool’s going down,” she says.

The last scene of the episode cuts back to the conversation between Rio and Beth in his car. He says she has an angel on one shoulder and the devil on the other. She notes that she’s damned either way. He asks: “So what’s it gonna be?”

Will Beth ever get one-up on Rio, and how will Stan and Ruby get out from under Gene? Hit the Comments with your thoughts!