With its latest episode, NBC’s Debris threw CIA agent Bryan Beneventi (as well as viewers) for a truly compelling time loop. And this Monday at 10/9c, it is his partner’s turn to have her own reality warped again and again.

In the first half of the two-parter, Bryan (played by Jonathan Tucker) and MI6 agent Finola Jones (Riann Steele) — in the course of investigating a debris report near Oceanside, Wash. — met a young man, Shelby (Keenan Tracey), who… actually had already met them, multiple times prior. Shelby explained that he and his sister Kathleen found a large cylinder of debris just off the cliff by their home, and that upon swimming into it they were transported back two days in time. But in repeating this process, Shelby soon returned to a reality where his sis did not exist. 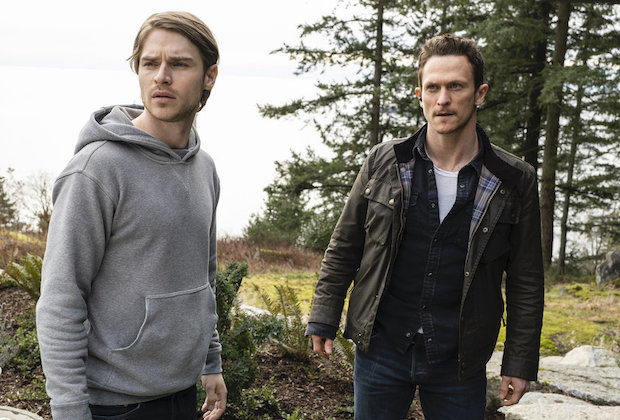 Bryan and Finola tried to help Shelby, but when his relating of past conversations with George Jones turned up contradictions, they grew suspicious — leading Shelby to “jump” and reset reality again. That resulted in Bryan being paired with different partners each time through the loop, until Bryan eventually jumped with Shelby and in turn became self-aware of the improbable odyssey. In turn, Bryan was determined to find his way back to Finola, who in the last reality we saw was riding a desk back in London, having never been assigned to Orbital.

“I was fully used to how when a new script comes, it’s a page-turner. But this was next level. Next level,” Steele  tells TVLine of the two-parter. “We knew that this was coming, that there was going to be two episodes with time jumps and resetting, but it wasn’t until you really read it that you were blown away by exactly how [showrunner] Joel [Wyman] created it. Because it isn’t just time jumping. It’s different realities. And it’s not just a different reality, but the question of, ‘Which one’s the real reality, and what does that mean? And who’s in the right reality?'”

As glimpsed at the end of Part 1, the Finola that Bryan made contact with over the phone — the one who related to him her father’s story of “the soldier and the penguin” — was a little low key. Steele, a recent TVLine Performer of the Week, affirms that with some versions of Finola she played in this arc, she applied a nuance to reflect her circumstances.

“You’re asking yourself, ‘Where was she in her life?’ And she is a Finola that hadn’t left to go to the U.S.,  so I wanted her to be changed by that,”  the English actress explains. “I wanted her to be not as put together as the Finola that we see with the slicked hair; instead, she’s a bit of a mess. She’s not as bright and as sparky and as confident.” 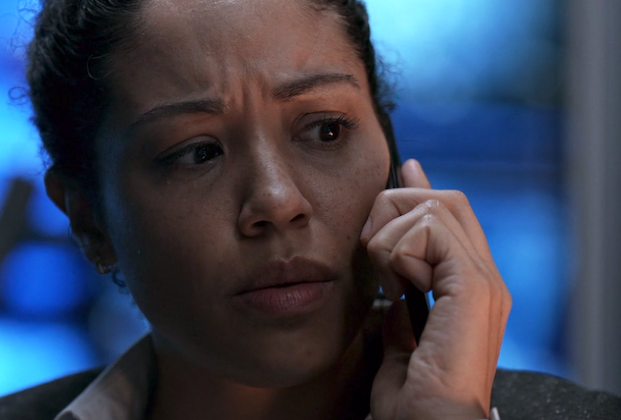 But hearing this stranger named Bryan speak fondly of their partnership and how he was desperately trying to find his way back to someone — her — might serve as a catalyst for this other Finola. “Maybe having this amazing encounter with someone in another reality who says that they’re trying to get back to you, that you mean something to someone somewhere else, would give her the confidence to make a different decision with her life, to go in a different direction,” Steele posits.

Finola will head in some sort of other direction this Monday, when Shelby and Kathleen’s time loop starts playing with the MI6 agent’s own reality, resulting in her own parade of Orbital partners — including Gibson (pictured above, played by Garfield Wilson) and even that pesky Grace (Aliyah O’Brien).

“I had some really great partners, and it was interesting building those relationships,” Steele previews. And when Finola comes face to face with Bryan for the first time, looking at each other through the quickly degrading reality’s “bleedthrough,” “What’s beautiful about that is you’re watching Finola look at a person that she’s never seen before but who knows her in another reality, and it solidifies the truth and authenticity of their relationship.”

So, even though the Bryan she sees is very much a stranger, their connection is such that Finola is led to take a leap of faith in the name of possibly getting everyone back to where they belong — and hopefully before the universe folds in on itself from all this reality-warping.

“There is a moment where she goes with her instinct, deciding that they’re connected almost by soul… almost like soulmates,” Steele teases.