Apple TV+ has got your weekend travel plans covered — and you don’t need to leave the couch to visit The Mosquito Coast.

Justin Theroux (The Leftovers) stars in the streamer’s new drama series, which 1) is based on the 1981 novel by Theroux’s uncle, Paul Theroux, and 2) dropped its first two episodes on Friday. Before you give us your take on the premiere — which deviates quite a bit from the book — let’s recap what happened in Episode 1:

Theroux stars as Allie Fox, an inventor who lives with his wife, Margot (Alias‘ Melissa George), and their kids, Dina and Charlie, in central California. In a house just outside of Stockton, the family keeps a bare-bones lifestyle — like, turning-used-cooking-oil-into-biodiesel-for-their-cars levels of minimal — which is partly due to Allie’s anti-consumerist beliefs, and partly because he’s barely making ends meet in the blue-collar jobs he’s working. Early in the episode, Allie checks the mail and finds a scary-looking foreclosure notice awaiting him in one envelope.

But the Foxes’ lack of technology (Allie won’t even let Dina have a flip phone) seems to be the product of something more serious, too. While running errands with Charlie one morning, Allie notices a car seemingly watching them from down the road, but the driver eventually pulls a U-turn and heads the other way. Later, Charlie spots the car again, not far from their house, but it’s gone a moment later.

Then there’s Margot, who nervously pulls up to a payphone in town that afternoon and calls her parents to wish her mom a happy birthday. But when Margot’s mother asks where Margot is, she quickly remembers that Margot can’t divulge that for some reason, and the conversation ends with Margot sobbing as her mom offers to help via money or lawyers. (It’s all very cryptic, but Something Bad has clearly gone down over the years.)

In the meantime, Allie has been banking on securing a patent for a machine he built that produces ice cubes from fire. His son is impressed by the contraption, and Allie is confident that it’s a lucrative creation, but the U.S. Patent and Trademark Office denies his proposal, leaving the Foxes broke for the foreseeable future. And that’s when we get some more hints about why the family lives so off the grid: “It’s been nine years and six identities,” Margot reminds Allie, panicking about what they’ll do now that Allie’s patent was denied. For some reason, the Foxes have been on the run for a long time, and Margot suggests that her parents could wire them some money without the authorities ever having to know.

Allie, unsurprisingly, shoots down that idea, then unveils an even more bonkers one that he’s been working on: What if he builds a boat — a trawler, specifically — for the family to live on somewhere? “You don’t get any freer than a boat,” Allie says. “And good luck finding us, by the way. Good luck with that.” Margot looks entirely skeptical at first, then admits (much to my shock, at least) that she’s “actually pretty excited” at the idea of boat life, reminding Allie that they’ll need to have cash on hand if they’re going to start fresh like this.

The next day, Allie and Charlie are driving, and they notice that same car following them again. Allie pulls a U-turn; the car does, too. Allie takes Charlie to the local dump, where he reveals there’s actual pieces of extractable gold in the electronics that people throw away so thoughtlessly. But as Allie’s climbing up a trash heap to rummage through for goodies, he spots that car once more, swearing under his breath at the realization that he’s cornered. Charlie thinks the people in the car are from the bank, since he spotted the foreclosure notice that Allie had received, but Allie sternly replies, “Those people aren’t from the bank.” 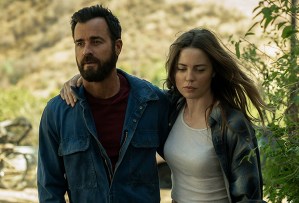 The Fox men head home, still being followed, and they turn on a police scanner they keep in Allie’s truck, which reveals that Stockton cops are heading to the Fox residence imminently. Allie tells Charlie to quickly pack a bag when they get home, “just like we practiced,” and when Allie informs Margot that “they found us,” Margot is horrified to realize it’s probably because she used that payphone to call her mother, which narrowed down her location. (All things considered, Allie is extremely chill upon learning this, shrugging that they were probably going to be found one day anyway.)

The next few minutes are a flurry of activity: Margot tells Dina and Charlie to pack their things, reminding a rebellious Dina that she always knew they might need to flee the States someday. Charlie does as he’s told, but Dina runs away instead, and there’s no time for Margot to try and chase after her. Margot and Charlie manage to drive off before the cops reach their house, and Allie — who’s driving separately in his truck — rolls out a spike strip to stop the one car that’s been tailing him. The escape is narrow, but it works, and the Foxes are able to regroup at a nearby motel.

When Allie learns that Dina ran away, though, he goes off to find her, telling Margot that she and Charlie should “keep running” if he’s not back by 2 am. That night, a scared-looking Dina finds a payphone and calls her grandmother — Margot’s mom — telling her she needs help. Then, around the same time, Allie goes to a different payphone and dials his in-laws’ number. He gets a busy signal at first, then tries again. “Dina?” Margot’s mom asks upon answering, to Allie’s surprise. “Is that you?”

Allie eventually tracks Dina down at the Stockton Transit Center where she’s planning to get outta town, though she looks relieved to realize her dad has found her. When Dina bluntly asks why Allie is doing this to the family, he responds, “Because we have a problem,” and it’s not the kind of problem that looks bad at first, only to be easily solvable when you put your mind to it. But Allie promises his daughter that whatever happens next is going to be an adventure for all of them, even though Dina doesn’t like the fear that comes with adventures — and before they can talk more about it, the cops arrive at the transit center, and Allie urges Dina to take his truck and meet Margot and Charlie back at the motel.

As Dina drives away from the building, she watches as her dad talks to the cops; they’re telling him to lace his fingers behind his head and kneel down, but Allie resists, asking them why he’s being arrested. Eventually, they tase him, and though Dina seems to consider going back to help him, she ultimately says, “F—k him,” and drives off.

A little while later, we find Allie in the backseat of the cops’ car, and the officers are talking nonchalantly in the front as they drive. Then, out of nowhere — bam! Dina, still driving Allie’s truck, intentionally crashes right into the side of the cops’ vehicle, stopping it instantly. Officer McMury in the passenger seat looks badly injured, and Officer Chu behind the wheel is coming to very slowly, giving Dina enough time to shatter the backseat window and pull her father out through it. She gets him into the truck, and though Officer Chu tries to stop them, she’s much too shaky from the accident to be effective: She stumbles, drops her gun while trying to raise it, and Dina has driven off by the time Chu pulls herself together. Inside the truck, Dina says nothing, but Allie looks at her from the passenger seat with a mix of pride and fear.

OK, your turn. What did you think of The Mosquito Coast‘s premiere? Grade it in our poll below, then drop a comment with your full reviews!