We’ve been waiting all season, and The Mighty Ducks: Game Changers finally brought in the some of the original Ducks for a special reunion.

The episode begins with Evan, who delivered a stellar performance in his last game, receiving an invite from Coach T to practice with the Ducks. A tempting offer to rejoin the team that dumped him like a sack of bricks leaves him conflicted, and turning to both his mom Alex and Bombay for advice. 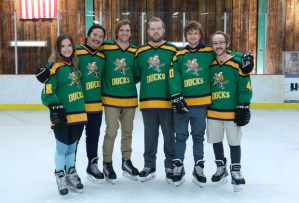 Meanwhile, Bombay is dealing with his own problems. A run-in with Fulton reveals that the OG Ducks are being honored at this year’s Spirit of the Ducks gala — an event Bombay knows nothing about. Mighty Ducks fans will appreciate the callback to the film in which Fulton, now a construction worker, drills into the ground and accidentally sends a piece of concrete flying into Bombay’s window; remember, he slapshots a hockey puck into Bombay’s window in the movie.

At dinner, we learn more about Bombay’s currently strained relationship with the OG squad, and where they landed after those inspirational wins: Banks became a public defender (Bombay started out as a lawyer before switching to coaching), Averman drives a limo to work every day, and Connie and Guy are happily married with three kids (one of which they named after Bombay!) Plus, Connie is now a Minnesota state senator.

The mood shifts when Connie and Guy say they invited Bombay to the wedding, but he never responded. Bombay makes excuses about moving around a lot and not being good with his mail as the reason that none of them have heard from him in years. When the Spirit of the Ducks gala comes up in the conversation, Bombay brushes it off and says he’s not going. The truth is that he wasn’t invited because he “doesn’t represent the best of the Ducks” — a fact that he wants to hide from his old team.

The OG Ducks take offense to Bombay’s dismissal of the event and their time together, leading Fulton to give us an update on Charlie Conway (played in the movies by Joshua Jackson): The former team captain refused to come to the gala since Bombay hasn’t shown up for them in years. Bombay says they all need to move on and heads out early, ending their dinner on a sour note. 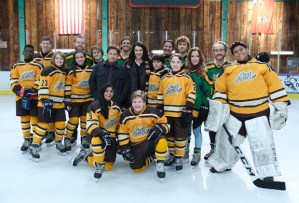 At the gala, Evan decides to turn down Coach T’s offer to rejoin the Ducks; Alex is relieved (and so are we!). The OG Ducks show up and realize that their beloved team has now become the Cake Eaters. When Evan finally meets his hockey heroes, who think Bombay no longer cares about them, he immediately sets the record straight.

Back at the Ice Palace, a lonely Bombay is taking shots in the rink when the Ducks roll up in a limo on the ice — a callback to The Mighty Ducks, when Bombay shows up to their first practice. Obviously, they’re there to make amends and escort their former coach to the party he should have been invited to.

Just when Stephanie is about to announce Coach T as the recipient of the Lifetime Achievement Award at the Spirit of the Ducks gala, Fulton interrupts to say that award should go to Bombay. The other OG Ducks chime in, opening up about how Bombay has impacted their lives, and start a Bombay chant.

Returning to the Ice Palace, Alex and Bombay plan a special practice for the Don’t Bothers with… the OG Ducks! The old gang returns to the ice in their original green District 5 jerseys to slap around the puck with the new generation. (Shoutout to Wu, who can still hit those figure skating jumps and spins.) It’s happy times as Connie shows the girls how to go for the solar plexus and  Bombay decides to become the Don’t Bothers’ assistant coach!

However, the mood shifts when Sofi discovers a video of Evan practicing with the Ducks. Feeling betrayed that he kept this secret from them, they skate away and leave Evan alone on the ice. Poor guy has some serious making up to do.

Was the OG Ducks reunion all it was quacked up to be?