Guard your assets, because Dawn, Mo, Blair and the rest of the Black Monday squad are back to their usual antics in Season 3 — and TVLine has your first look.

The above trailer for the Showtime series’ forthcoming season, which premieres Sunday, May 23 at 10/9c, shows the bombastic crew bringing their financial scheming into the ’90s.

Season 3 finds Mo (Don Cheadle) stepping into the music business, but “the crown jewel in his new venture, Nomi (guest star Adrienne Wells), a self-possessed young talent with the voice to prove it, might be too hot to handle,” reads the official description. Dawn (Regina Hall), meanwhile, is serving her sentence after taking the wrap for Black Monday but is living her best life while “exploiting her business savvy behind bars,” and newly-minted Congressman Blair (Andrew Rannells), “a guppy navigating shark-filled political waters, is aided by his equally ambitious new Young Republican handler Werner (guest star Thomas Barbusca).”

Back on Wall Street, Keith is “morphing, literally and figuratively, into a lost Leighman Brother, while the red-hot success of Skants is catapulting Tiff to mega-moguldom.”

Season 2 saw Dawn and Blair take over the TBD Group while Mo and Keith fled to Miami. Blair hooked up with a congressman, Dawn used the leader of college fund, Keith was taken advantage of by the Leighman Brothers, Tiff pivoted from her successful Georgina Jeans to Skants (new trend alert!) and Mo rose out of Wall Street exile as head of the newly minted The Mo Co.

Black Monday was created by David Caspe and Jordan Cahan, who executive-produce the comedy in addition to serving as showrunners. Seth Rogen and Evan Goldberg also executive produce. Check out the official Season 3 key art below: 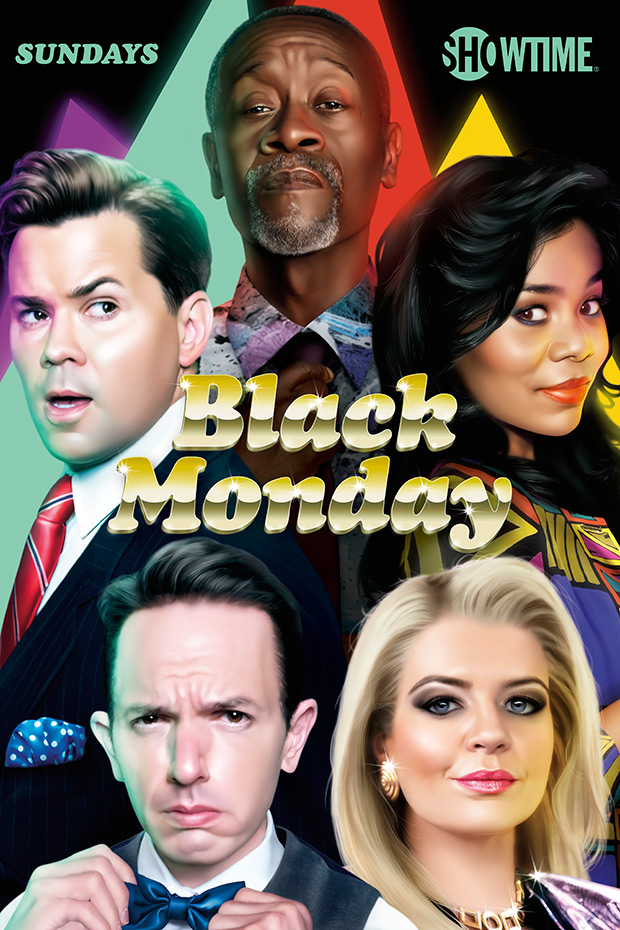 Want scoop on Black Monday, or for any other show? Email InsideLine@tvline.com and your question may be answered via Matt’s Inside Line.