With all eight episodes of Shadow and Bone’s first season now streaming on Netflix, we’ve only scratched the surface of the robust fantasy story adapted from Leigh Bardugo’s bestselling book trilogy.

The series has yet to be renewed for Season 2 (get on that, Netflix!) but showrunner and writer Eric Heisserer (Bird Box, Arrival) says he has big plans for future seasons if given the chance.

“I want it to run as long as it’s welcome and give life to these characters for as long as we don’t overstay that welcome,” Heisserer tells TV Line. “There’s so much material that Leigh has written, and there are so many compelling characters, I think this flagship show could last for four seasons. And then we could figure out if there’s a new space to live in with any of these people, or any part of the world that we want to spend more time with.” 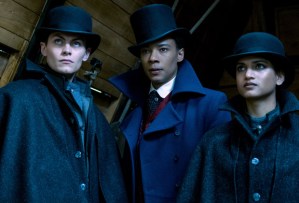 Heisserer “hasn’t heard anything yet” from Netflix regarding a renewal (the streamer famously leans heavily on data from the first 30 days of release), but he’s already hard at work mapping out a potential second season, using a giant conspiracy-like board filled with notes and strings. If Shadow and Bone does get the opportunity to continue, Heisserer plans to delve into several big relationships, including that of the fan-favorite Crows.

Though Kaz, Jesper and Inej don’t pop up in the story until the spinoff book Six of Crows, the characters were incorporated into Season 1 via the heist plot to kidnap Alina (Jessie Mei Li), a story that was created specifically for the series. The prequel storyline also changed the dynamic of the crew, which wasn’t as cohesive in the books as it is portrayed in the series. (For example, Kaz’s mistrust of Jesper informs a good chunk of their relationship in the books — and the series immediately does away with that.)

But as Heisserer explains, the established cohesiveness is “for us to get to a place in these characters lives when you understand what it means for, say, Jesper to meet Wylan and how that’s going to change his life, and vice versa. You understand how the push and pull of the Kaz-Inej relationship gets more tense and more strained and they are really bound by their own traumas.” 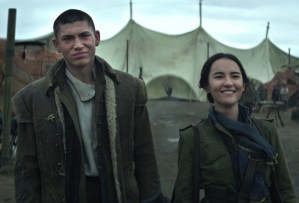 A potential Season 2 would likely also include a deeper exploration of Mal and Alina’s romantic relationship, which was hinted at this season. Although they share a kiss in the first book, the series only went so far as longing looks, sweet declarations of friendship and heartwarming letters.

“There were definitely moments where a kiss felt warranted, and I will say this in a generalization and I’m certainly not pointing fingers at anybody, but I I fought battles on the show. I won some and I lost some,” Heisserer shares, “But I believe there is there is a lot of kissing in their future, should we ever get the opportunity.”

The Shadow and Bone boss hopes to bring in additional major characters such as Wylan Van Eck (a member of the Crows) and Nikolai (the son of Ravkan king Alexander III with his own private fleet), as well as explore Kirigan’s next move and revisit the Crows in Ketterdam. “It would be good to see if Wylan and Kaz already had a relationship and then maybe Weiland is responsible for something in Season 1.”

Like maybe that device Kaz uses to escape the Darkling?