The following contains major spoilers from the entire season of The Falcon and the Winter Soldier.

One of the biggest revelations in The Falcon and the Winter Soldier‘s finale, which is now streaming on Disney+, is that Sharon Carter was the Power Broker all along!

Sharon first revealed herself to viewers in a private confrontation with Flag Smasher leader Karli, which got crashed by Batroc. A mid-credits scene then showed the former fugitive (who was forced on the run after aiding Steve, Sam and Bucky in Captain America: Civil War) calling an unknown number to gear up for the selling of government secrets and prototype weapons, after receiving a full pardon and being reinstated as an agent (of some kind).

Kari Skogland, who directed all six episodes of the Marvel series, is just as excited as you are about the villainous twist to Carter’s Agent 13, who in the comics ends up rejoining S.H.I.E.L.D and even briefly steps in for Nick Fury as Executive Director.

“What I like about her is that she’s a survivor, so I don’t know that she’s inherently bad,” Skogland tells TVLine. Moving forward, “I don’t know yet what she’s going to do, but she’s had to survive out there on her own during the Blip and being on the run without family — and look at what she built and where she went. She’s clever, and that’s what I love about it most.” 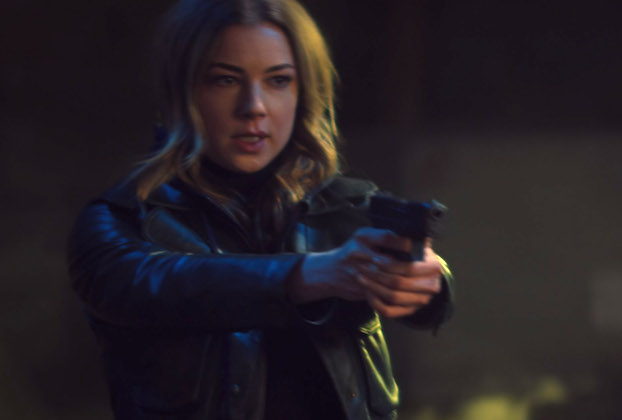 Skogland says that MCU vet Emily VanCamp, who plays Carter, really stepped up for the series and performed most of the stunts you see, such as that elaborate fight scene outside the lab in Madripoor. “[Sharon’s] badassery in terms of all the fighting that she did was really [Emily]; there’s very little stunt work in there. She worked very hard at that and, she did a great job. More to come on that one, for sure,” she adds.

As for rumors of a potential pandemic plot being erased (partly in post-production/via dialogue replacement), from the Flag Smashers’ storyline, Skogland says that wasn’t the case at all. “It was always about Sam’s journey with the shield, so it wasn’t anything to do with a pandemic,” Skogland maintains. “We didn’t change anything beyond moving some scenes around and then maybe shooting a pickup to connect here or whatever.”

Skogland notes that once production resumed (after filming shut down in March 2020 amid the COVID-19 outbreak), “any changes that we made were more character-based, and it was just honing in on Karli some more. One scene we wrote was her and Dovich outside, as they’re contemplating. We hear a bit more about how they connected, because we really started loving that character and wanted to know a bit more about where she’d come from and how they had met.

“And even then, I thought, ‘Wouldn’t it be interesting to hear a little bit about what they felt like when they first took the serum?’” adds Skogland. “So it was things like that were more character-based. What I imagined is really on the screen; there’s not really much material that has dropped off.” 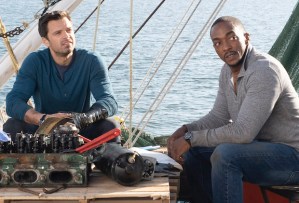 With Sam officially taking up the mantle of Captain America at season’s end, there is plenty of story to explore with The Falcon and the Winter Soldier’s eponymous characters. Whether that will be with a second season of the Disney+ series, or such tales will be told in Captain America 4 (which is reportedly in development), remains to be seen. But should Sam and Bucky return to the small screen, Skogland isn’t so sure about additional scenes of the pair fixing up Sam’s family boat.

“I don’t know that that boat’s still going to float. [Bucky] might have fixed it up but it was still kind of dodgy,” she jokes. “And as with Marvel, who knows? I sure hope that they do, but I have no idea if they are.”