Monday’s final episode of The Voice’s Season 20 Knockouts really did make me see stars. I gave out grades of A to no fewer than six — yes, six — contestants. And they really, really deserved them, I wasn’t just getting overexcited as I sometimes do. (Yeah, I can admit it.)

Unfortunately, none of those singers were among the quartet that was competing in the Four-Way Knockout. (Tell me again why we can’t bring back Ethan Lively or Halley Greg.) Read on, and we’ll review all the performances, the good, the great and… oh dear. Poor Connor Christian. 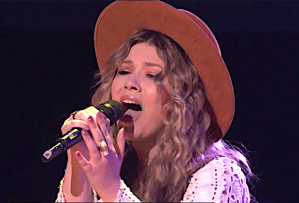 Team Nick: Rachel Mac performing “Foolish Games” (Grade: A) defeated Zae Romeo performing “Electric Love” (Grade: A) — Zae stolen by Kelly | After running through her Jewel cover for her coach and Mega Mentor Snoop Dogg, the latter remarked that he heard some Teena Marie in there. Nick warned that on closed-A notes, the teen tended to get pitchy. When it was Zae’s turn, he explained that he’d chosen to revamp Børns’ hit as a way of honoring the love between his recently-deceased grandpa and his wife. He sounded terrific, too, but oddly British, Nick noted. On stage, Rachel connected with the material so intensely, she and it were all but fused. And she demonstrated as much control here as she hadn’t had when trying to contain her excitement at meeting Blake during the Blinds. A starmaking performance, one that was so good, I didn’t even mind the massive quantities of vibrato she threw in. Next at bat, well, s–t. Zae had me eating out of the palm of his hand from “go.” His voice may enter through the ears, but it cuts straight to the soul. Ridiculously good Knockout. I was thinking I’d have to give the win to Rachel by a hair… but then Zae went and nailed a big note toward the end that was like, “Think again, buddy.”

Team Kelly: Kenzie Wheeler performing “Beer Never Broke My Heart” (Grade: B+) defeated Avery Roberson performing “Tomorrow” (Grade: C) | In rehearsal for the Battle Knockout of the Four-Chair Turns, Avery was advised by his coach to add some vibrato to avoid running out of air and going pitchy. (Mind you, if he was pitchy, it was slight enough that it didn’t set off my ear-dar.) For his part, Kenzie sounded like a baby Blake on his Luke Combs cover. And though he looked like your kid brother awkwardly doing his best on karaoke night, it somehow worked for him; “dang right” that boy has charm to burn. That said, Kelly did warn that “when you say ‘Come on’ like that [before the hook], ain’t nobody comin’ with you,” whether the audience is real or virtual. In the moment of truth, Kenzie sounded as good as the offer of a cold one on a hot day. There was just so much oomph to his vocal, it was like a runaway stagecoach I feared Avery couldn’t possibly catch. When it was his turn, he delivered a performance that was as shaky as it was intimate. WTH happened during that “no” toward the end? Poor kid. Seemed like a case of nerves eating him alive. 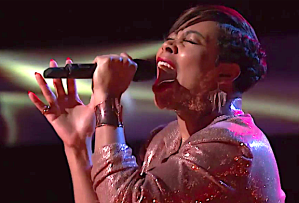 Team Legend: Zania Alaké performing “If I Were Your Woman” (Grade: A+) defeated Rio Doyle performing “Issues” (Grade: B-) | After Rio ran through her Julia Michaels number, John and Snoop told her to take care with her enunciation and, during the staccato parts, don’t, um, forget to be staccato. Zania sounded like she was gonna mop the floor with the teen — especially after her coach came up with a more showstopping way to end the number. (The difference was, ahem, Knight and day.) When the spotlight fell on Rio, she did a fine job of making the lyrics understandable and reminding us what a big voice she has. But overall, the performance had all the impact of a commercial break; it just didn’t land. Zania, on the other hand… holy crap. First she navigated the verse in that impossibly tricky lower register, then she absolutely tore into the classic, eviscerating it with a vocal so powerful, it was a wonder poor Rio didn’t sneak off stage during it. That was how obvious it was who had won. As Kelly put it, Zania had sung “the word I shouldn’t say on this show” out of the song. 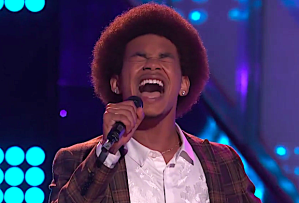 Team Blake: Cam Anthony performing “Feeling Good” (Grade: A) defeated Connor Christian performing “Youngblood” (Grade: D) | After his standout Battles performance, I had high hopes for Connor. But it sounded like he was headed for trouble — Blake said he was wasting precious air on a vocal affectation that he didn’t need. Ruh-roh. On the flipside, Cam didn’t so much sing his Nina Simone classic as live it — and that was just in rehearsal! On stage, poor Connor started off… well, off. And we’re talking way off. He didn’t get too much better, either. When he sang “I’m just a dead man walking tonight,” all I could think was, “Aw, gee, yeah, man, ya are.” When he was done, Cam served up a spectacular illustration of what The Voice is when it’s at its best. He was present, he was charismatic, he was swept away by the song, and he swept us away with him. He even started off a cappella! And just when you might’ve thought, “Well, he’s just a terrific singer,” he threw in some scatting. I’m telling ya: The Season 20 win is gonna come down to Cam and Zae.

Team Kelly: Gihanna Zoe performing “Glitter in the Air” (Grade: A) defeated Anna Grace performing “If I Die Young” (Grade: A) — Anna stolen by Blake | Before unveiling her reworking of the Band Perry’s hit, Anna reminded us that when she was 17, infections had almost claimed her life. For my money, she sounded better in that rehearsal than she ever has on stage. Still, her coach and Snoop wanted her to stop holding back, even if she wound up crying on stage instead of singing. Running through her Pink number, Gihanna made not only Kelly but Anna weep. This promised to be a good Knockout. Behind the mic, Anna dazzled; I finally “got” what the coaches kept going on about. Not only was her control stunning, you could hear, really hear, the tears in every note. A pretty perfect performance. Second in the spotlight, Gihanna shone from the start, the ache in her voice all but reaching out to our hearts and inviting them to open wide. And those runs… wow. Breathtaking. Tough one to call, but in the end, I agreed with Kelly’s pick. Thank goodness Blake had a steal left.

In a quickie cutaway, we learned that Team Nick’s Jose Figueroa Jr. had defeated onetime frontrunner Raine Stern (who’d made the grievous mistake of choosing John Mayer’s “No Such Thing” to perform — so not right for her).

Emma Caroline (Team Blake), “Neon Moon” — Grade: C+ | Singing first, Emma managed to overcome her nerves enough to smile a little. But she was so stiff and “adequate,” she had to have made her coach wonder why he’d thought he should save her in the Battles. “It’s always hard to make these decisions,” Blake joked afterward, “but the winner of this Knockout is Emma.”

Devan Blake Jones (Team Nick), “Sign of the Times” — Grade: C | When Devan started singing, I feared he’d bitten off more than he could chew with this Harry Styles hit. But now and again, he rose to the challenge, giving the impression that he has a fine set of pipes, just maybe not complete mastery of them. Nick was impressed, anyway, calling this “the best vocal performance we’ve heard from you.” 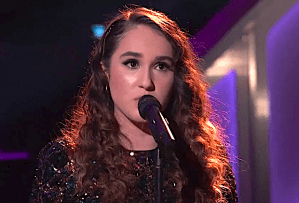 Carolina Rial (Team Legend), “Anyone” — Grade: B- | Though it was smart of Carolina to play to her strength — belting — she left me feeling more like I’d been yelled at than sung to. On the plus side, at least there was some urgency to it, which probably made her the one to beat. Her coach considered the performance a fab plea to America to vote for Carolina.

Savanna Woods (Team Kelly), “Black Hole Sun” — Grade: B | My favorite going into the Four-Way Knockout started her performance so bizarrely, I was sure viewers were gonna be like, “What the… ?” Eventually, she unleashed her rasp and rocked out, but I still have a feeling Carolina will be the contestant the audience puts through to the Live Playoffs.

Overall, a pretty excellent night of singing, eh? Vote for the standout in the poll below, then weigh in, too, on which contestant you think should emerge victorious in the Four-Way Knockout.