For Master of None fans who wondered what a Season 3 that focused on Denise (played by Lena Waithe) instead of Dev (Aziz Ansari) would look like, Netflix’s official trailer offers a glance.

Arriving more than four years since Season 2’s release, the new season premieres Sunday, May 23 and will spotlight Denise and her wife Alicia (Star Wars: Episode IX The Rise of Skywalker’s Naomi Ackie), the streamer announced, while dropping a cinematic trailer, key art and first-look images.

Titled Master of None Presents: Moments In Love, the five-episode spinoff of sorts is being described as a “bottle season” and a “series evolution” that will maturely but comically explore the ups and downs of Denise and Alicia’s road to love and mutual understanding.

Ansari — the series’ co-creator (with Alan Yang), Emmy-winning writer and the lead in the first two seasons — took a more active role behind the camera this time around, penning the installments with Waithe (also an Emmy winner) and directing them all. The entire season was shot on film and takes place mostly at an Upstate New York farm where Denise and Alicia are shown in the trailer driving, strolling, dancing, arguing, making up and even bathing together.

Master of None‘s initial exploration of Denise’s sexuality, in a Season 2 episode titled “Thanksgiving,” focused primarily on her instead of Dev and earned Ansari and Waithe their first Emmy for writing. Angela Bassett guest-starred as Denise’s mom and earned an Emmy nod. (Although she doesn’t appear in Season 3, Bassett’s voice can be heard in a phone conversation.) 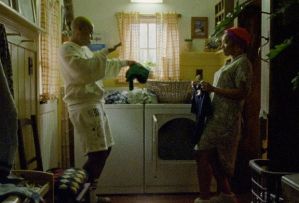 By not focusing on Ansari, on-camera, as a single man looking for love, the Netflix series is able to move away from a 2018 incident in the comedian’s personal life. At the time, a 23-year-old woman posted an article online detailing a date with Ansari that ended uncomfortably, with the actor allegedly committing sexual assault. Ansari released a statement soon after saying, “It was true that everything did seem OK to me, so when I heard that it was not the case for her, I was surprised and concerned. I took her words to heart and responded privately after taking the time to process what she had said.”

A year later, Ansari explained his side of things further with the Netflix standup special Aziz Ansari: Right Now. In it, he addressed the allegations, admitting that he “felt terrible” that his accuser felt that he had violated her.

Master of None released its second season back in May 2017, and has twice been Emmy-nominated for best comedy series. Additionally, Ansari won a Golden Globe in 2018 for best comedy actor.