Warning: This post contains spoilers from Shadow and Bone Season 1. Read at your own risk.

Shadow and Bone‘s General Kirigan, aka the Darkling, might be known for summoning darkness, but he’s also a master at manipulation.

His lonely-boy charms convinced everyone, including Alina (Jessie Mei Li), that he’s just a good guy looking out for the Grisha. Later in the story, we learned that not only is he much older than he let on, but he’s also the one who created the Fold in the first place.

The affable Grisha leader took Alina under his wing to help hone her powers so they can bring down the Fold together — at least, that’s what he told her. In actuality, he was just using her to gain access to her gift in an effort to control the Fold, which would make him even more powerful and fearsome than he already is. Ben Barnes, who plays Kirigan, says that while the Darkling sees Alina as a valuable asset and key component to his plan, he’s also drawn to her because of their similarities.

“He recognizes something of himself in her,” Barnes tells TVLine. “He’s been through exactly what she has been through, so he is a version of her future.” 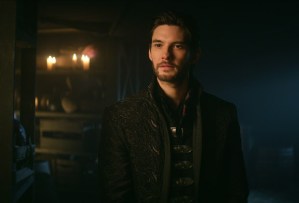 Through their intimate training, Kirigan and Alina quickly bonded over their perceived commonalities. Kirigan laid it on thick with gentle touches, encouraging words and heart-churning backstory, and it’s not surprising that Alina fell for his charms.

“Obviously, their relationship is problematic,” Barnes says of the pair. “He’s at the top of the food chain [in] the hierarchy of the world, and he manipulates and abuses his power in order to make her do his bidding, essentially. He tries to convince her of his ideologies along the way and tries to share with her as much as he feels he can, but he’s a mistrustful person.”

Barnes notes that while Kirigan does seduce Alina with his many lies, the series also “worked hard to give her some agency in the story — she makes the move on him” and also addresses the issue of consent.

“He asks at one point if she’s OK with what is happening between the two of them, but obviously, his actions become kind of irredeemable,” he explains.

Those unforgivable acts include tricking Alina into handing over the stag under the pretense that he would set Mal (Archie Renaux) free, using the stag’s horns to strip her of control over her powers so that he can access them anytime he wishes, and one moment that Barnes finds absolutely irredeemable.

“There’s a moment where he gives her a bunch of flowers, and that, to me, is the most disgusting moment in the whole show. I can’t forgive him for that. Even though I play it, I cannot find a way to justify it,” he says.

The season ended with Alina gaining the stag’s power and using her light to guide everyone out of the Fold, and Kirigan seemingly eaten alive by the monsters he created. However, one last twist revealed him to be badly injured but still very much alive. He was last seen leading his army of nichevo’ya outside of the Fold, hinting that this is only the beginning. 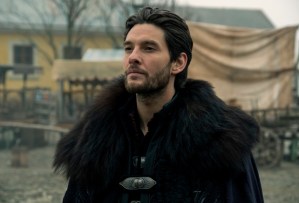 Netflix hasn’t yet renewed the series for Season 2, but Barnes is holding out hope that the story can continue on.

“I have lots of ideas about what could happen, and I feel like there’s lots of room for spreading your wings from the books and really having all the characters intersect in ways that they don’t necessarily in the books.”

Barnes adds that he’d also like to see what becomes of the Darkling “because he’s a bit more representative and symbolic as we go forward in the trilogy. So it’d be interesting to see what the opportunities are to humanize him going forward.”

Did Shadow and Bone live up to the hype? How do you feel about the series incorporating elements of Six of Crows? Grade the season below, and let us know your thoughts in the comments!