Prodigal Son’s Malcolm Bright seems to be a magnet for bizarre personal relationships.

There’s the heavy dysfunction with his father, of course, and the often-strained visits with his mother and sister. But the one we’ve found most uncomfortable as of late? His dynamic with NYPD medical examiner Edrisa, who’s had a massive — and massively awkward — crush on Bright since the Fox drama began.

To be clear, Edrisa’s infatuation with Bright didn’t start with a high cringe factor. When he first teamed up with Major Crimes, it was actually pretty adorable and hilarious, the way Edrisa would get flustered around him or accidentally reveal how good-looking she found him. Even Keiko Agena, who plays Edrisa, has noted the pair’s “awkward, off-kilter” energy prompted by her character’s crush.

But particularly in Season 2, her unrequited feelings for Bright have become even more overt, veering more and more into uneasy territory for both Bright and viewers. In Episode 7 of the sophomore run, Bright asked Edrisa if she’d be free that evening to help him with something, and she responded, “It’s a date” when he said he’d meet her in the lab that night. Not a single hint of actual romance was dropped in that conversation, but upon getting to the lab, Bright found his colleague wearing a little black dress and heels that she’d clearly just purchased, with rose petals strewn across one of the lab’s tables. (Bright was nice about it, but obviously weirded out.)

Then, during Tuesday’s installment, Bright visited Edrisa’s apartment while attempting to solve the case of the week, prompting her to give a less-than-subtle tour of her pad: “Office area… bedroom. Not relevant, just, y’know, elephant in the room. It’s right there. Queen-size bed, pillow top.” Once again, Bright changed the subject quickly. And more generally, hardly an episode of Prodigal Son goes by where Edrisa doesn’t stumble over her words while debriefing Bright at a crime scene, until she’s snapped out of her reverie by Dani, JT or Gil. 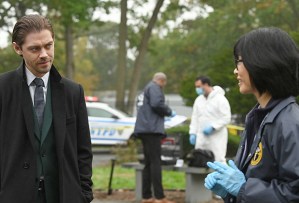 The increasingly blatant swooning is disappointing on two fronts. For one, even though the crush and seduction attempts are largely played for laughs — a quirky and harmless part of Edrisa’s character — it’s truthfully a bit inappropriate, especially when Bright doesn’t reciprocate the feelings. Imagine if the roles were reversed, and it were a male employee frequently ogling his female crush, or scattering rose petals for her in their workplace, or not-so-casually pointing out where his bed is at home. Agena’s comedic timing can so effortlessly steal a scene that it’s easy to forget her character is crossing a line with a colleague — but she is, and often.

And there’s something even more unsettling here: that a woman as intelligent and fascinating as Edrisa is so often reduced to a giggly schoolgirl when her cute coworker walks through the door. Aside from Bright, Edrisa might be Prodigal Son’s most brilliant character, using her love of all things macabre to make shrewd observations about a crime scene. And when we have gotten to know more of her backstory, like we did in “The Killabustas,” Edrisa gets the compelling character development she so deserves.

But those occasions are all too rare, and Edrisa is more often found melting like a Popsicle in summer the moment Bright looks at her. And given that she’s one of the few female characters on broadcast TV to speak openly about her enjoyment of sex — her fantastic web-sleuthing alias is Kama Sutures, “because, y’know, I’m always sewing up bodies and I like sex” — it’s especially disappointing to watch Edrisa’s healthy desire for intimacy get channeled into a borderline-icky infatuation at work.

Tuesday’s episode, which introduced a potential non-Bright love interest for Edrisa, was encouraging; in a Season 1 interview with Refinery29, Agena even speculated that her character “has had a crush, or she has had a supercharged sexual relationship with someone” in her off-screen life, “but they’ve never been the same person. She’s definitely dated, but she hasn’t had the romance of those two things happening at the same time.”

Edrisa deserves a storyline where she does find a compatible partner who reciprocates her feelings — and in the meantime, perhaps Bright (who’s clearly crushing on Dani instead) can let his colleague down easy with an honest conversation. But as Prodigal Son nears the end of its sophomore season, here’s hoping the series retools Edrisa and Bright’s dynamic; there’s clearly potential for an excellent, innuendo-free friendship there, and that’s a story we’d love to see.