The Falcon and the Winter Soldier‘s finale staged a final showdown with Karli and the Flag Smashers, before teasing “weird” things ahead in the MCU (as well as a new title for any possible Season 2).

The episode “One World, One People” picked up right where last week left off, with the GRC’s meeting/vote on global resettlement sent into turmoil by the Flag Smashers. As Bucky arrives on the scene, an incoming Sam radios him to say he sent for backup, in the form of Sharon Carter. Sensing the heroes’ arrival, Karli gives the order for the GRC chamber to be gassed, forcing an evacuation — right into the path of a masked goon. He is promptly KO’d, though, by Captain America’s shield — as lobbed by Sam, who comes crashing through a window in his new star-spangled threads. While Sam slugs it out with Batroc, Karli manages to get Bucky on the phone, in part to taunt him with questions of ideology but mainly to distract him from realizing that the GRC members are being whisked to “safety” in a pair of armored vans, which Flag Smasher Lennox has sealed with locks.

While Bucky gives chase on a motorcycle, Sharon “bumps into”/doses Lennox with poison in the parking garage, to keep him from tailing the vans. Sam escapes Batroc to get into an aerial chase with a helicopter carrying GRC bigwigs, but piloted by a Flag Smasher. After having Red Wing confirm that one of the passengers, Ayla, has flight training — and after a brief detour to save an NYPD helicopter crew from a crash, to boot! — Sam coordinates with Ayla to seize the controls just as he breeches the cockpit and drags out the pilot. 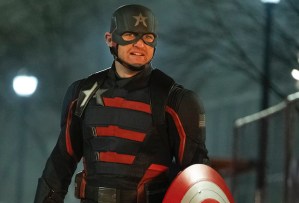 With Bucky fighting Flag Smashers streetside, Karli creates a distraction by setting one of the blockaded vans on fire. As Bucky struggles with the doubly-armored back door, John Walker arrives (in his Cap duds and toting his homemade shield) and angrily calls out for “Morgenthau!” Walker gets into it with Karli and then all the nearby Flag Smashers, but Bucky, after rescuing the vanful of GRC peeps, intervenes and saves Walker from a beating. Karli makes off with the second van and jumps out after steering it off a ledge toward a construction pit. Walker saves the van from plummeting, until Flag Smashers jump him en masse, and they all tumble into the pit alongside Bucky. Before the van can nosedive a second time, Sam as Captain America swoops in to rocketblast it up to safety.

When Sam joins Bucky and Walker in the pit, Batroc lobs in some smoke bombs, allowing for the Flag Smashers’ escape. Karli  retreats into a nearby building’s basement, where she thinks she is following the coded whistling of a confederate, but instead runs into Sharon Carter. The ladies lower their guards and express how they are each “disappointed” in one another, and we realize that Sharon is in fact the Power Broker. Sharon invites Karli to ally with her again to “make a difference together,” but Karli scoffs, “You just want your muscle back.” Batroc arrives on the scene, and Karli realizes he was double-crossing her on behalf of the Power Broker. Batroc demands quadruple pay for his efforts, but Sharon instead meets his blackmail with a bullet — while taking one from Karli herself. Sam arrives to slug it out with Karli, while Bucky and Walker get the drop on the other Flag Smashers topside. When Karli pulls a gun on Sam, shots ring out — from nearby, wounded Sharon, felling the young Super Soldier, who apologizes to Sam with her dying breaths. 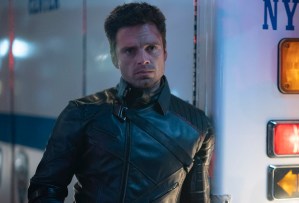 Sam flies Karli to the street, where he receives thanks from the GRC leader. In a great speech, Sam urges the GRC to stop calling the Flag Smashers “terrorists,” saying that such labels are used by governments to elude bigger questions about why they are doing what they do and why they are met by opposition. Sam notes that the GRC is poised to have the same impact as a cosmic force who could erase half the planet, so they need to choose their battles wisely. When the GRC leader speaks about difficult decisions, Sam counters, “I’m a Black man wearing stars-and-stripes. What don’t I understand” about hard decisions? “Millions will hate me” for adopting the Captain America persona, he says. “Even now I can feel it…. No super serum, no blonde hair and blue eyes. My only power is the belief that we can do better.” Sam warns the GRC, “If you don’t step up” at this critical moment, “the next Karli will. You have as much power as an insane god or a misguided teen. How will you use it?”

In the aftermath, Bucky commends Sam on the speech he jokes about only hearing a part of… Sharon apologizes for “how that ended” by shooting Karli dead (and thus keeping her Power Broker cover)… and a government agent asks for Sam’s help in tracking down the Flag Smasher pilot he lobbed into the river earlier. Dovich and the other Flag Smashers are loaded into a transport to eventually land them on The Raft, but just when it seems as if a complicit guard will arrange for their escape, the vehicle blows up — detonated from nearby by Zemo’s butler Oeznik. 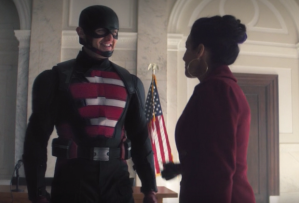 In a series of epilogues, we see Zemo at The Raft listen to the news of his handiwork, while Contessa Val celebrates the same headlines (“I couldn’t have planned it better myself,” she tells Olivia Walker) before John tries out his new, blacker costume. “Things are about to get weird,” Val tells him. “And when they do, we will not need a Captain America. We’re going to need a… U.S. Agent.” Bucky shows up at Yori’s apartment, to reveal that the old man’s son had been murdered by the Winter Soldier… “and that was me.” Yori asks why, and Bucky answers, “I didn’t have a choice.” The next day, we see Bucky pass by the sushi shop, where he catches waitress Leah’s eye and nods… but keeps on walking. His shrink, meanwhile, finds a gift bag in her office, inside of which is Bucky’s “ledger” and the note: “I finished the book. Thanks for all your help.”

Sam visits Isaiah Bradley to in part explain of his role as Captain America — “We built this country and bled for it, I’m not about to let anyone tell me I can’t fight for it” — but also to take the former Super Soldier and his grandson Eli to the Cap exhibit at the Smithsonian, which has been updated with a tribute to Isaiah, bronze statue and all. “Now they’ll never forget what you did for this country,” Sam says, as the men hug. Sam returns to Lousiana for a big ol’ party featuring lovely music, much seafood and Bucky showing off for the kids (and the ladies), before the screen fades to a new title: Captain America and the Winter Soldier. 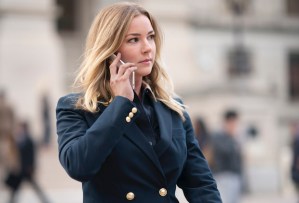 Lastly, in a singular bonus scene, a senate committee grants Sharon a full pardon, and welcomes “Agent Carter” back into the ranks. But once outside, she who is also known as the Power Broker places a phone call, saying, “Start lining up the buyers.” Because while Super Soldiers may be off the menu, she now has full access to government secrets and weapons — “something for everyone”….

What did you think of the FAWS finale, the Power Broker reveal, Val’s “weird” warning and everything  else?