With The Falcon and the Winter Soldier serving up its finale this Friday, April 23, Danny Ramirez is quite excited about any possible future as Joaquin Torres — or, even better, as the Air Force officer’s costumed alter ego.

Playing Sam Wilson/The Falcon’s fresh-faced handler/intel officer “so far has been such a joy,” Ramirez tells TVLine. “It’s all been positive memories being a part of this story, that I would 100 percent say yes [to more]. Without a doubt, no questions asked. Where do I sign?”

Ramirez undoubtedly would relish the chance to “suit up” as Torres does in the comic books, assuming the Falcon persona after Sam takes on Captain America’s mantle. (Sam did leave his broken wings with Torres in the last episode, hmm….) But as for whether Torres gets pulled into the season-ending action instead of serving as a mild-mannered intelligence officer, “You will have to wait and see,” the actor hedges. “But there’s a lot exciting stuff down the road, maybe, from what I’ve been hearing…. There’s a lot of things to be excited about, for sure.”

Ramirez is even less forthcoming about Friday’s finale itself — if only because Marvel Studios’ trademark secrecy measures made him only privy to his own scenes. 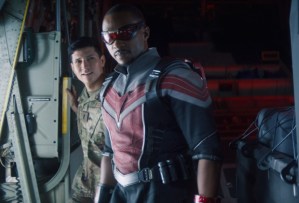 All season long, “I’ve been curious as to how the story has unfolded because even when we were shooting, all I got were my scenes. I’ve been surprised along the way,” he tells TVLine.

Among those surprises have been John Walker’s trajectory from newfangled Captain America to disgraced soldier, after being caught on video murdering a man with Cap’s shield. A bonus scene at the end of Episode 5 then showed Walker crafting his own shield, suggesting he might take up the mantle of Marvel villain U.S. Agent.

For Ramirez, Walker’s evolution, for better or likely worse, has been interesting to watch.

“We’ve seen that his character is plagued with his view on patriotism,” he says. “At the end of the day, Walker believes in what he’s doing but it’s been warped via the system he’s a part of. Cracking that open and being confronted with this cloud that has fogged his view and pushed him over the line… that’s been fascinating to explore.”

The finale also seems poised to shed light on Karli and the Flag Smashers’ endgame, infuriated as they have been by the fact that months prior, the Blip returned half of a population that the world had worked hard to live without after the Snap. (Ramirez told us he “hadn’t heard” anything about a pandemic storyline being erased from the Flag Smashers storyline in post production, as has been posited online by New Rockstars.)

“The situation at hand has been dealing with the return of everyone [and] all that that entails, and what the Flag Smashers are bringing to the table and their view on the world,” Ramirez notes. “That’s what Joaquin’s really been dropped into.”