It’s been a twisty, turn-y season of The Challenge, one filled with Gold Skull showdowns, brutal backstabs and stolen partners, but at the end of Wednesday’s brutal Icelandic final, new champions were officially crowned.

In Part 1 of the Double Agents finale, TJ told the agents that one team wouldn’t be crossing the finish line. After a knee injury nearly took Kaycee out, an absolutely disgusting eating challenge took the wind out of Fessy’s sails, as the former collegiate footballer seemed to be throwing in the towel. Is the Big Brother duo heading toward elimination, and after all of this season’s devilish double-dealing, who walked away $900,000 richer? Let’s recap the finale’s second half and find out.

BONUS NOMS | As part of her reward for winning the eating portion, Amber and CT get to sabotage another team with a bonus plate of gross food. They throw the dagger at Kam and Cory, who are closest behind them in second place. Kam and Cory suck it up and get the job done, leaving Kaycee and Fessy in the dust.

Fessy throws a tantrum, sitting off to the side and sulking like a schoolchild, causing TJ to ask if he even wants to continue. Kaycee, however, chows down on sheep’s face, blood, testicles and the rest of the culinary horrors in front of her as if her life depended on it. (You’ve gotta love it when the show trolls Fessy by playing The Cure’s “Boys Don’t Cry” — bravo, editors!) Despite Kaycee’s heart, TJ times them out… to the tune of “Karma Chameleon.” It’s a shame Kaycee went down like that after giving her all, but this is a well-deserved end to Fessy’s messy game. “Karma” indeed!

CAVE CAMPING | Checkpoint 4 is located in a dark, tiki-lit cave, where players must complete an equation before resting for the night. CT destroys the complicated math problem like it’s 2+2. At this point, can anything stop this champ? 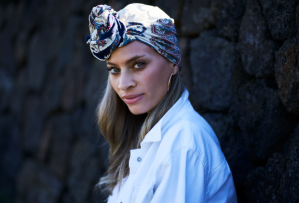 After all teams finish, TJ says they’re staying put in the icy cave for the night. Since CT finished first, he gets to decide which partner he wants to run the rest of the race with. He sticks with Amber, and TJ tells them it’s going to be “the longest night of their lives.”

One teammate is allowed to sleep, while the other must stay up, holding a heavy capsule while standing. The temp is 28 degrees, but it drops another 13 degrees by the time the night is through. Oh, and players must stick their faces in an ice bath before switching off to sleep. Nany calls TJ “sick,” while the host laughs maniacally. We love you, Teej.

THE LAST SCHLEP | In the morning, the players race up a massive glacier to find a pickaxe. They must break a capsule out of a block of ice — they’ll need that for later — before continuing on. CT and Amber maintain their lead, but Leroy is sooo hungry for the win.

At the next checkpoint, players must decode a message’s dots and dashes using the key on their capsule. CT and Amber have to run back to check the key, but Nany and Leroy decide to memorize it first before running up the hill. (This ain’t their first rodeo!) CT and Amber still beat them to the punch, decoding the word “infiltrate” and moseying on their way.

The last checkpoint is a tangram puzzle. (No, not a “tangerine” puzzle, Darrell!) CT once again makes quick work of it, and he and Amber continue to maintain their lead. As the episode draws to a close, it seems CT and Amber have sealed the deal, but it’s a tight race for second between Kam and Cory, and Nany and Leroy.

WHO WON? | After the grueling two-day final challenge, CT and Amber emerge victorious, marking CT’s fourth career win (six, counting spinoffs!), and a first win for his rookie partner. The last two teams sprint to the finish, but Kam and Cory take the second-place prize of $100K.

Did the right team win? Sad that Leroy took the L? Grade the finale and season in the polls below, then drop some comments!