Throughout Snowfall Season 4, a usually dominant Franklin Saint has been, well, less so.

Never-ending conflicts with Skully and Manboy, as well as Franklin’s father Alton oversharing with an investigative reporter and Louie almost dying, left Franklin reeling. Throw in his chronic pain after being shot last season, protecting Leon at all costs and a less available Agent Teddy McDonald, aka Reed, and it seems like Franklin is perpetually a step or two behind.

But Damson Idris, who stars as Franklin, says when the beloved crime drama unveils its Season 4 finale this Wednesday (FX, 10/9c), fans are going to see the man they used to know. In fact, if his disposal of Manboy and dismissal of Tanosse are any indication, this Franklin might be even icier.

“Franklin gets stronger every week, and the turning point was Episode 8,” Idris sagely tells TVLine. That installment featured one of Franklin’s most explosive moments this season, which took place shortly after Irene’s interview with Alton went public. The scene also foreshadowed the take-charge Franklin that viewers will see in the season closer. 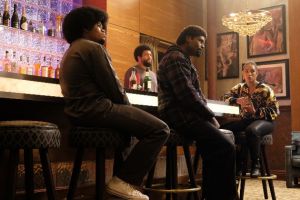 “That scene was special. It was written special,” Idris recalls. “The writers gave us a lot of monologues this season, and Dave Andron, our showrunner, made this one longer. But it wasn’t written the way it was performed. It was a lot more delicate.”

“But I, personally as an actor, was frustrated that day,” the London native divulges. “I remember seeing an interview with [Quentin] Tarantino where he said, ‘If an actor has a bad morning, somehow, that bad morning needs to make its way into the scene.'”

Idris says he and the cast shot the scene around the Christmas holiday when he was waylaid by the pandemic, which added to his inner vexation.

“I couldn’t go home for Christmas because of COVID, and I was alone on Christmas, and I was just frustrated around that time,” he adds. “I’d missed out on another role because it clashed with this one, and I let it all out in that scene. It’s funny, because after I did it, everyone was kind of stunned.” 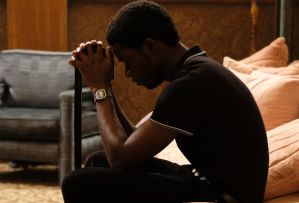 Amin Joseph, who plays Uncle Jerome, was especially concerned about Idris’ Michael Corleone moment where Franklin yelled at Jerome, Louie and Leon for giving him grief: “Keep your heads down, keep your mouths shut and let me get us out of this like I got us out of every motherf–king thing else.”

The memory still brings a smile to Idris’ face.

“Amin Joseph walked up to me afterward, and he goes, ‘Hey Damson. Did I ever tell you you’re a good actor?,'” Idris says, doing his most loving impression of Joseph. “Those are the moments we live for. And everyone in the cast has had those moments throughout this season. Like Isaiah John [who plays Leon] and the hair gel scene.”

“These moments are going to live on in the history of television,” he concludes. “And, more importantly, the young people coming up are going to be able to see people who look like them onscreen performing to the best of their ability. Hopefully, they can use that as inspiration.”