Ben Barnes and his luxe fabric coats are ready to dazzle you in Shadow and Bone, which premieres this Friday on Netflix.

Adapted from Leigh Bardugo’s bestselling fantasy trilogy, the series follows Alina (Jessie Mei Li), an orphaned teenager whose life is upended when she demonstrates the ability to summon light. Her newly discovered gift puts her in the path of General Kirigan (Barnes), a powerful man who’s been searching for someone of her talents.

As the charming leader of the Grisha — a secular group that practices the Small Science, aka magic — Kirigan possesses the ability to summon and manipulate darkness. Alina’s sun-summoning power compliments his own and is key to his mysterious plans for the Fold: a dangerous stretch of land shrouded in impenetrable darkness which also connects the Ravkan capital to its port cities on the western coast. 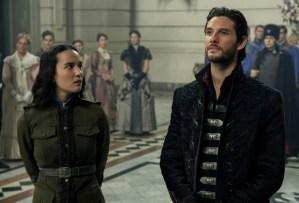 In the books, Kirigan is known mostly as the Darkling. But in the Netflix series, he operates under the name Kirigan for reasons that will become clear once you delve into the eight-episode first season. Despite the name change, Barnes says his take on the recognizable character isn’t comparatively different to his book counterpart.

“I would say, outwardly, he feels like he feels on the page,” Barnes tells TVLine. “When we filmed the very first day [with the Grisha army in the Fold], I called Leigh Bardugo that evening, and I said, ‘I feel like I’ve walked off the pages into the story.'” While Barnes has appeared in literary adaptations like The Chronicles of Narnia: Prince Caspian and Dorian Gray in the past, “I never really felt quite viscerally like that before.”

Kirigan uses his charm and authority to get closer to Alina, whom he takes under his wing, to help hone her newfound skills. As the story unfolds, viewers will learn more about Kirrigan’s motives behind the extreme actions he takes for what he views as protecting the Grisha, who were once persecuted and now live like royalty in a grand palace alongside the Ravkan king.

“He doesn’t believe that his methods are unjustified considering his plight,” Barnes explains. “I think that it’s very difficult to condone a lot of his behavior by modern standards, but it raises interesting questions about whether we forgive people more if we understand the why. Do we forgive people more if we believe that [he has] humanity and we believe that [he has] some kind of nobility of agenda to safeguard his people? Or whether he has the potential to change and love someone again?”

The series from showrunner and writer Eric Heisserer (Bird Box, Arrival) combines elements from Six of Crows, a companion to the book trilogy, which centers on a group of thieves, aka the Crows, in the city of Ketterdam. That ragtag crew is made up of Kaz (Freddy Carter, Pennyworth), a rising star among the Crows who is willing to do anything for the right price; Inej, aka the Wraith (Amita Suman, The Outpost), a skilled spy who can get around without anyone noticing; and Jesper (Kit Young, Endeavor), a lovable sharpshooter with a gambling problem who joins the crew to pay down his many debts. The trio of antiheroes provide some much-needed comic relief as well as several action-packed sequences as they attempt to cross through the Fold. 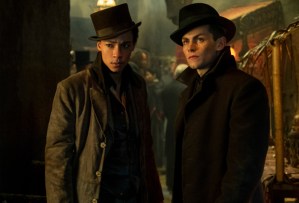 Young, who plays Jesper, reveals that stepping into a complex fantasy world with a dedicated international fanbase is intimidating. He says he felt a nervous energy while filming one of his first scenes on set. “I was holding these cards and this coin, and both of my hands were just trembling. I don’t know whether it was the pressure of [it being] the first time I’ve got to really be this guy or just knowing that it means a lot to people,” Young recalls.

“The part of the story that Kit is leaving out,” Carter chimes in to add, “is that on that day, he had to kick himself back in a chair, risk hitting his head, flip a coin 10 feet in the air and fire a gun all in the space of about two seconds. He had a lot going on.”

Suman also admits to being fully aware of Shadow and Bone‘s massive popularity when she signed onto the project. Before stepping onto set, she made sure to read the books and undergo training — she’d only completed a stunt-training course in drama school — in order to capture Inej’s swift and acrobatic fighting style on screen.

“I hadn’t really gone to the gym. I wasn’t active, I wasn’t fit, so when I finished reading the books, I knew that I had a lot of work to do,” Suman shares. “I said to myself, ‘I can’t respect this character if I don’t put in the physical training and feel what Inej feels when she does all of her spying around and fight scenes.'” 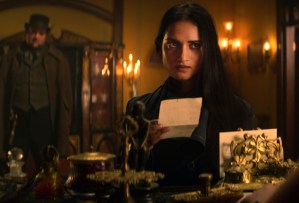 While Inej is known for carrying around a set of small knives, Kaz’s trademark is an ornate, gold-tipped cane which he proudly displays throughout the series. Serving as both a walking aid and handy fighting weapon, the beautifully crafted object bears great significance for Bardugo, who was diagnosed with osteonecrosis and sometime uses a cane to get around.

“I had a lot of conversations with [Bardugo] about how she wanted to see someone who walked with a cane but wasn’t a villain,” Carter says. “Kaz is an antihero, and he does some morally questionable things, but he’s definitely not a villain. I think that was really important to Leigh [Bardugo], and then subsequently to me, to make it something that he was just really proud of and loved about himself and never stopped him from doing anything.”

Are you excited to finally see the Grishaverse on screen? Let us know your thoughts in the comments below.