Chastain Park Memorial Hospital is down one phenomenal surgeon.

TVLine has confirmed that Tuesday’s hour of The Resident, which found Mina Okafor leaving Atlanta to return to Nigeria, doubled as the final episode for actress Shaunette Renée Wilson, who is leaving the series.

“After deeply thoughtful reflection, I approached the producers some time ago asking to leave the show and they agreed — and gave my character a wonderful sendoff,” Wilson said in a statement. “I am appreciative of them for allowing me to embody as beautiful of a soul as Dr. Mina Okafor. I would also like to thank the studio, network, cast, crew and, most of all, the wonderfully dedicated fans of The Resident for their support over the last four seasons.”

“Losing the extraordinary Shaunette is heartbreaking for us, but we are honoring her request to leave with gratitude and respect for her contribution to the show,” The Resident‘s executive producers added in a statement of their own. “We want the fans to know that we have lots in store for AJ as he reels from this loss, and we want Shaunette to know the door is always open.”

Wilson has been a part of the Fox medical drama since the pilot episode in 2018, with Mina quickly establishing herself as one of Chastain’s most talented surgeons. But earlier this season, after realizing Mina was prepared to testify against him about his medical malpractice, Dr. Cain conspired to get Mina deported and put her entire medical career in jeopardy. By the time Cain tried to call off his plan, it was too late; Mina ultimately chose to go back to Nigeria of her own volition, which, unlike deportation, would make it possible for her to return to the United States someday. (AJ, who initially planned to join Mina in Nigeria, will stay put in Atlanta, after his mother was diagnosed with Stage 4 lung cancer in Tuesday’s episode.)

Below, EP Andrew Chapman explains how The Resident‘s creative team approached Mina’s exit storyline, then offers some teasers about the impact of her departure on the rest of Season 4. 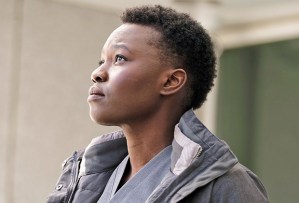 TVLINE | What can you share about the circumstances of Shaunette’s exit? Did you and the writers have much time to prepare?
We knew from pretty much the beginning of the season that Shaunette wanted to exit the show, and that she was going to be allowed to exit the show. We were heartbroken. We love Shaunette, we love the Mina character, we feel like the character of Mina is so baked into the DNA of the show, and she was such a foundational member of the cast — that strong, truth-telling character is so important. But it is what it is, and people move on, so we knew from the beginning that we were going to have to figure out a way to exit her.

We knew it was going to be in Episode 10, and then we had good ideas for issues that would plague her, because we’d already talked many times about immigration issues. One of the core things about her character was that she was an immigrant doctor, and that was a key thing to play in this world. There are so many immigrant doctors in the United States, and they have issues staying in this country and keeping their visas. We felt like, “OK, we’ve got a lemon in that we’re losing Shaunette, but let’s do what The Resident does really well.” Let’s find a way to make it personal, and let’s find a way to attack issues that are on the forefront of modern American health care. We figured we would take this long, 10-episode arc and explain exactly what happened, and why, and how.

TVLINE | Mina and AJ also got together at the start of this season, even though Shaunette’s exit was in motion. Was there any internal debate about whether to pair them up finally, given that they’d have to part ways?
They were going to get together at some point. If we’d had Shaunette for more seasons, we might have put it off another season, but we knew they were going to get together. So once we knew she was leaving, we were like, “OK, we have to tie the knot on this relationship. It’s just too important and too powerful.” And the audience has been asking for it for so long. You can’t just say, “No, never.” And they have great chemistry together on screen. It was just palpable, right? You could just see it. It was so moving and interesting, and not always perfect either. They got angry at each other, even when they were a couple. We wanted to go whole hog, and we did. And I’m glad we did. I think it was the right choice. 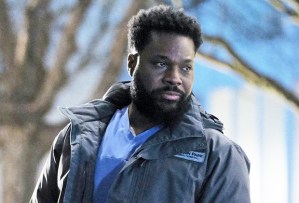 TVLINE | What can you say about how this affects AJ moving forward? Will he seek any kind of vengeance on Cain for setting this all in motion?
You hit on what will be one of our central storylines, all the way to the end of the season. [Editor’s note: Season 4 will end with Episode 14.] AJ does not forgive Cain and is still angry at him, even when dealing with the heartbreak of what’s going on with his mom. Especially in our last episode, you’ll see the pain that AJ battles is going to boil and boil and boil, and, in our season finale, comes to a head, and it’s just great. I’m not going to give it away, but he’s dealing with the loss of the love of his life, he’s dealing with his mom being sick, and now in the last couple episodes, he has to deal with the fact that here’s this guy who he blames for a huge amount of his problems. They have to come to some kind of understanding, or one of them absolutely has to leave. That’s what we’re playing right up to the end. And honestly? It’s awesome. [Laughs] Not to toot our own horns, but Malcolm[-Jamal Warner] is a great actor, Morris Chestnut is a great actor, and they just dove into it. Every scene that they have together is electric. You’re like, “Holy mackerel,” and you just want to see more of it, see more of it, see more of it.

The Resident fans, how do you feel about Shaunette (and Mina) leaving the show? Grade her farewell episode in our poll below, then get all your feelings out in the comments.