The bond between Hollywood and Aunt Vi has strengthened over time on Queen Sugar.

And when the Season 5 finale airs this Tuesday (OWN, 8/7c), fans will see that their closeness is further fortified by tough love and honesty. That’s because Hollywood tells Aunt Vi that it’s time to apologize to Ralph Angel for overstepping when Vi argued against Blue’s new school and living with his grandmother in Washington, D.C.

“Listen, Tina Lifford and I chat all the time about why Aunt Vi is always in the mix,” Omar J. Dorsey, who plays Hollywood, tells TVLine with a chuckle. “We talk about it a lot. Like, why is she always putting her toes in everything? Why? She’s just got to be the one. When we read the lines, Tina said, ‘That makes all the sense in the world.’ And we shot it a few times, but she knew my spirit. I’m glad that Hollywood says what he says and that he doesn’t feel like he needs to hold his tongue.” 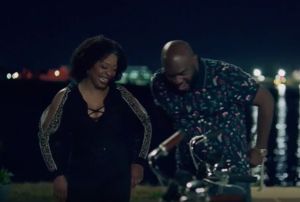 It’s a level of honesty that couples strive for, where each person can say at any time, “‘You know you’re wrong, right?,'” Dorsey adds. “You always want to have your mate’s back in public. But in private, you know you have to tell them the truth.”

In past seasons, fans have seen Hollywood be less than truthful with Vi. And even midway through Season 5, he hid his gun from her, which angered her when she found it. But with every week, the two have grown closer as they’ve quarantined during the COVID pandemic. Now they are free to truly be themselves with each other. Honesty doesn’t mean hurtfulness, however, and when Hollywood forces Vi to face the truth about her dogmatism, he does so with a well-placed and very culturally relatable, “That’s all I’m saying.”

“That one was in the script,” Dorsey admits. “But we go in sometimes. We know the characters so well, and we’re Black folks. We know how Black folks talk. The writers, Ava [DuVernay] and  Anthony [Sparks], are tremendous, and they know what they’re doing. But they give us a lot of freedom to do what we do, and I appreciate that.” 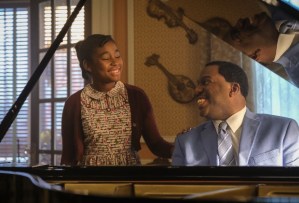 Amid shooting Season 5, which EP DuVernay and showrunner Sparks rewrote from scratch to reflect how 2020 affected Black America, Dorsey also co-starred in the Nat Geo limited series Genius: Aretha as the late Rev. James Cleveland. He just had to figure out how to shoot both shows during, and in spite of, pandemic-enforced shutdowns. But somehow, he did it.

“Both Queen Sugar and Genius: Aretha said they were shutting down for two weeks, and then two weeks became three months,” Dorsey recalls. “But then when we came back, Ava was like, ‘We’re going in a different direction with Season 5. We’re going to reflect what went on with George Floyd. We’re going to reflect on the Black Lives Matter movement and what 2020 looked like.’ And I have to commend her and Anthony for that. I’ve never seen anything like that. This is my favorite season so far.”

Elsewhere in the Season 5 finale, Charley figures out what Davis means to her, Ralph Angel and Darla find unexpected joy despite missing Blue, and Nova and Calvin come to an uncomfortable crossroad involving his past. Check out an exclusive sneak peek of that uncomfortable Nova/Calvin moment below: