Last week’s episode of Good Girls served up the tasty tidbit that Beth’s crime boss had a boss of his own, and that intriguing piece of info was just what Beth needed to gain leverage with Secret Service agents Dave and Phoebe. On Sunday, we finally caught a glimpse of Rio’s home life and learned that the big, scary figure he answers to is… his grandmother?

While Beth worked her way deeper inside Rio’s family biz, Annie harbored an innocent secret from Ben, as financial strain pressed Ruby and Stan to come up with a side-hustle of their own. (These women sure know how to stay busy!) Read on for a recap of all the latest developments.

It’s been a while since we last saw Tyler, the security guard-turned-acting manager of Annie’s former employer, but at the top of the episode, he once again comes face-to-face with the three armed and masked women. What in the world is about to go down? We jump to “Days Earlier” to unpack the latest scheme.

Annie’s acting all sorts of shady, trying to sneak out of her apartment early. After refusing to tell Ben what’s in her backpack (he guesses guns, drugs and body parts, because he has that much faith in his poor mother), we see her opening a textbook in a GED prep class. Will she pass this time?

Dean’s back at home, but still clueless as to how Beth finagled his freedom. Not so minor detail: He’s trapped within a three-block radius of their home, thanks to an ankle bracelet.

The women meet with Phoebe and Dave, who make it abundantly clear they DGAF about the women’s financial woes. Beth wakes up one day with a fresh plan and begins knitting new masks. The looks on Ruby and Annie’s faces says it all.

Meanwhile, Phoebe starts wearing eye shadow after complimenting Beth on her eye makeup. Dave so casually notices (“What’d you do to your face?”), then regales her with a tale of his former friendship with a criminal informant that burned him. He warns her that the women are not her friends. “I get it,” Phoebe says. “I’m gonna make her my bitch, OK?” 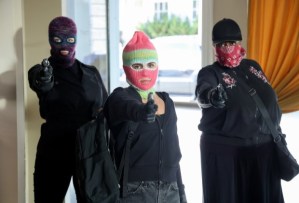 Annie invites Tyler over to her apartment to inquire about his “exciting new job,” and almost immediately, the women go into planning mode. It’s a “suicide mission” that will take forever. Beth’s response? “Perfect.”

Tyler’s working a security job at a jeweler, so Ruby joyrides her motorized wheelchair through the store to shoot some recon video. The ladies later go in for the kill, nicking enough diamonds to make Rihanna proud. When Tyler walks into work late (he’s got donuts, so we’ll let it slide), it’s clear that he and the women have concocted a plan. In the very next scene, the women sit across from Dave and Phoebe after being (purposely) arrested. The agents tell them that despite the squirt guns the ladies used in the charade, armed robbery will still get ’em 5-10 years.

“We’re just trying to make a living,” Beth tells them. But Beth knows exactly what she’s doing. When she drops the fact that Rio’s boss wants to meet with her, the agents’ ears perk up, and they agree to put the women on payroll. Their risky plan works, and Ruby’s back at home counting benjis in her kitchen. She clues Stan in on a plan of her own which involves last week’s fake designer bags, and says he should pitch to Gene.

Annie arrives to take her GED test and tries to pay off the proctor to get a passing grade. (Will this girl ever learn?) He clearly shuts her down.

It’s time for Beth to meet the boss. Dave and Phoebe wire her up and offer their best advice for how to get out of sticky situations: “Improvise.” Helpful.

Josh shows up to Annie’s drunk as a skunk after his bachelor party. He doesn’t want to get married after all. After some weird toilet humor that I’d love to not recap for you, Annie gets right to it: “Do you really want to be with me, or do you just not want to be with her?” His face is filled with uncertainty. 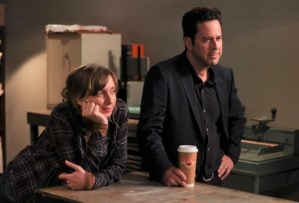 Beth meets Rio in the ‘burbs and finally meets his boss-lady grandmother. His extended family is all present and accounted for, as Rio shares that Beth works for him. He puts his hand on Beth’s back verrrry close to where her wire is, so she excuses herself to the bathroom to get out of that jam.

She takes the mic off and stashes it behind some John Grisham paperbacks on a bookcase. Rio appears in the doorway. “You figure it out yet? Grandma loves Grisham.” He tells her that family and business are the same thing, and they wanted to meet her to see if she’s “good enough.” Beth then unbuckles his belt, but he shakes her off, opting to pull her dress up instead. They have a montage-style quickie before Rio says, “Hey… they like you.” (It appears he still does, too!) Sooo, mission accomplished, then?

Ben’s annoyed to find Annie and Josh mid-embrace. After Annie explains “it wasn’t that,” she cops to taking her GED exam. They check her test results and… she passed!

Stan comes home and tells Ruby he “got his cut.” Their living room is littered with fake bags as far as the eye can see! How much money they’ll make will depend on how much they can hawk the fakes for.

Back at the Bolands, Dean’s frustrated with his ankle monitor, which he feels is a new form of prison. Beth asks the kids to turn the TV volume up, and then she gets talking.

Does Phoebe just want to be friends with the women, and what exactly did Beth tell Dean? Hit the Comments with your thoughts!