One week before the Academy Awards go down on ABC, American Idol‘s Top 12 assembled live to perform Oscar-winning songs of yesteryear.

Showing them all how it’s done was Lionel Richie, who kicked off the two-hour event with a performance of “Say You Say Me” from White Nights, for which Richie won Best Original Song at the 1986 ceremony. Click here to watch. 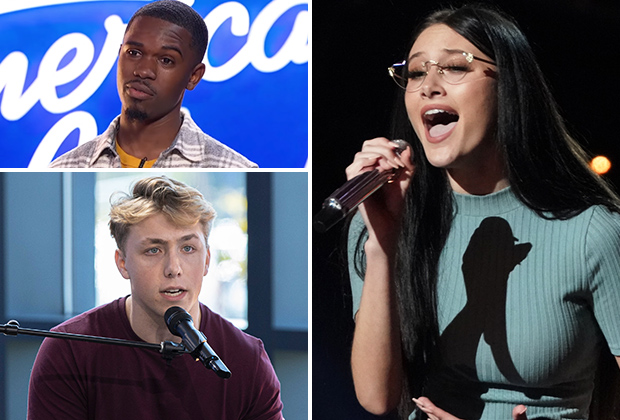 Before we get to the songs, let’s start with the results. The following nine singers, who will be joined by one of last season’s returning competitors, are proceeding to the Top 10: Grace Kinstler, Casey Bishop, Willie Spence, Alyssa Wray, Caleb Kennedy, Deshawn Goncalves, Chayce Beckham, Cassandra Coleman and Hunter Metts.

Sadly, that means we had to say goodbye to Madison Watkins, Beane and (gasp!) Ava August.

Read on for our breakdown of Sunday’s performances, with official videos being added as they become available:

GRACE KINSTLER, 20 (“Happy” from 2013’s Despicable Me 2)
Like the world’s most talented onion, we’re discovering new layers to Kinstler with each passing week, and I’m falling more and more in love with her as a performer. Going against Katy Perry’s suggestion for a more classic-sounding song was a bold move, but what is Kinstler if not bold? There was nothing despicable about this high-energy, stage-commanding take on Pharrell’s ubiquitous hit, even if it made the judges question what kind of record Kinstler would put out. (A Minion-approved record, that’s what!) Click here to watch.

AVA AUGUST, 15 (“City of Stars” from 2016’s La La Land)
Do I think La La Land is big-time overrated? Yes. But did I still get chills when I heard that August was tackling this gorgeous number? Also yes. It was a perfect fit for her ethereal voice, which was never in doubt for a moment. And unlike Kinstler, August showed us exactly what her potential record would sound like. I was tempted to side with Perry and Bobby Bones (for once!) and agree that August should embrace her youth a little more, but there’s just no denying that voice. Besides, what the heck does it mean to “be 15 or 16,” anyway? We’re all different! Watch:

CALEB KENNEDY, 16 (“On the Road Again” from 1980’s Honeysuckle Rose)
How can someone so talented keep delivering such consistently boring performances? Vocally and instrumentally, I have no critiques. This kid is good enough to put out an album tomorrow, but who is he?! Kennedy gave us a glimmer of a hint of a personality when he briefly addressed the audience (“Let me hear you, come on!”), but it was a fleeting moment. Also, why aren’t the judges giving him the same critiques they’re giving August about needing to sound more like a teenager? Are male Idol contestants expected to be less exciting? Click here to watch.

HUNTER METTS, 22 (“Falling Slowly” from 2007’s Once)
This probably would have been a better pick for the Duets round — since, you know, it’s a duet — but Metts did a solid job strumming along by his lonesome. Well, until he forgot the words at the end and sobbed his way through the judges’ critiques. That said, what we did hear was gorgeous, and there are far worse ways to screw up on live television. (Just ask Ashlee Simpson!) I actually think that his imperfection endeared himself to viewers, though I’m not sure I’d agree with Richie that his mistake made it a “perfect run.” Click here to watch.

MADISON WATKINS, 25 (“Run to You” from 1992’s The Bodyguard)
I’m so glad the judges chose to keep Watkins in the competition, if only because it gave us a chance to bask in her glow once again. From its lovely beginning to its powerful climax, this was a solid performance. She did this iconic Whitney Houston ballad proud. (Unrelated, but I’ve been trying to figure out who Watkins reminds me of, and it finally clicked tonight. Is there not something Megan Fox-like about her?!) Watch:

CHAYCE BECKHAM, 24 (“[Everything I Do] I Do It for You” from 1991’s Robin Hood: Prince of Thieves)
If I could sum up this performance in one word, it’d be… fine? I thought it was a nice fit for his gravelly, ’90s/’00s-sounding voice, but when Richie praised Beckham for finding himself in the second half of the song, I questioned whether we watched the same performance. I also rolled my eyes at Perry’s comment about the “young ladies” eager to vote for him tonight, because I feel like Beckham is fully coasting on that charm. This song needed a moment, and it just didn’t have one. Click here to watch.

BEANE, 23 (“[I’ve Had] the Time of My Life” from 1987’s Dirty Dancing)
Last week, I wondered if I might be a Beanie Baby. I can now confirm, yes, I’m a card-carrying member of the team. Like Perry, I was big-time worried that this performance was going to be cheesy as hell. (Never forget: He’s a professional wedding singer!) But from his unconventional opening to his endless bag of vocal tricks, he sold this from start to finish. His conversation with Bones also proved that he knows his place in this competition, recognizing what his competitors have to offer and how he can use his own quirks to get an edge. (And what’s this about him being deaf in one ear? I never would have guessed.) Click here to watch.

ALYSSA WRAY, 19 (“This Is Me” from 2017’s The Greatest Showman)
Echoing Richie’s sentiments, I loved this performance, which started out good and grew into something truly stunning. And kudos to Wray for nailing that high note, which even original vocalist Keala Settle has famously fumbled during live performances. (Quick question, though: Why was Richie the only judge who weighed in on this one? Did the show run of out time?) Watch:

DESHAWN GONCALVES, 20 (“The Way We Were” from 1973’s The Way We Were)
Somewhere, Fran Fine is plotzing. I wasn’t crazy about this performance at first — I thought it gave off major lounge singer vibes — but Goncalves was fully tapped into the emotion by the end. And I love that Ruben Studdard reached out to give him some encouragement. Click here to watch.

CASEY BISHOP, 16 (“Over the Rainbow” from 1939’s The Wizard of Oz)
The word “timeless” has been used to describe Bishop’s performance style multiple times, so this Judy Garland classic was a perfect choice — especially because it was such an exciting departure from what we’re used to seeing. This entire performance was a moment, and I agree with Perry about Bishop being the frontrunner. The only question is: Did Bishop officially dethrone Katharine McPhee, who famously owned this song back in Season 5? Click here to watch.

CASSANDRA COLEMAN, 24 (“Writing’s on the Wall” from 2015’s Spectre)
This was a tough one, especially since it started big right out of the gate, but Coleman handled herself nicely. Her nerves have a tendency to get the better of her on that stage, and they were definitely present this time around — but when it was good, it was good. After hearing Coleman’s performance, I’m also wondering why Florence Welch hasn’t been tapped to do a 007 song yet. (Get on that, Hollywood.) Click here to watch.

WILLIE SPENCE, 21 (“Stand Up” from 2019’s Harriet)
Let’s be real, none of has any doubt that this would be incredible. But even I wasn’t expecting such a beautiful — or as Richie said, “religious” — experience. The hight notes were breathtaking, the low notes were bone-chilling, and the emotions were palpable. Watch:

Who gave your favorite performance of the night, and did the right nine singers move on to the next round? Drop a comment with your thoughts on the state of Season 19 below.