Even without having read the book, the official trailer for The Underground Railroad pulls you in and makes you want to fight with Cora (played by South African newcomer Thuso Mbedu) on her perilous path to freedom.

Amazon Prime released the nearly two-minute trailer Thursday for Academy Award-winning filmmaker Barry Jenkins’ limited series, which is based on Colton Whitehead’s Pulitzer Prize-winning novel of the same name. The highly anticipated adaptation premieres Friday, May 14 and follows Cora, an enslaved young Black woman who is treated as a motherless outcast on the Georgia plantation where she is forced to live and work. Painful snippets from the plantation are explored in the breathtakingly cinematic trailer, including a field of white cotton and a cluster of Black people toiling in it.

When she hears about an escape network that could free her from bondage, Cora decides to risk her life and break free — only to discover it is not a symbolic metaphor. This Underground Railroad is an actual railroad with conductors and engineers, operating a secret network of tunnels and tracks just below the soil under her feet.

Cora is shown descending a ridiculously long rope ladder in one scene and using a torch to explore her cavernous surroundings in another. She also learns how to shoot a gun and possibly fall in love.

But the road to freedom is never easy and Cora is doggedly chased by Ridgeway (Joel Edgerton, The Great Gatsby), a slave catcher obsessed with bringing her back to the plantation she escaped. Ridgeway’s fixation is heightened because Cora’s mother Mabel (Sheila Atim) is the only enslaved escapee he never caught. As Cora deals with the pain of never getting to say goodbye to Mabel as well as her journey to liberation, she must steer clear of the dangers that lurk around every corner. As for the actress who plays Cora, the drama is creating an opportunity for her to show the world what she can do — even if she doesn’t like to ponder such things. 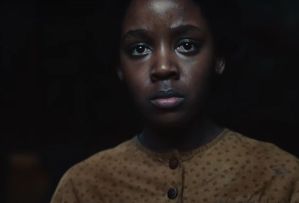 “When I step into a new role, I don’t think about what it means beyond the craft,” Mbedu, the first South African to lead an American series, recently told Elle. “It’s an opportunity to challenge myself and fulfill my purpose. But this is a great win for [South Africans], which makes me very happy. I come from a place where working in Hollywood is a nice dream to have, not necessarily attainable. Now it feels like nothing is impossible.”

Jenkins (Moonlight) wrote, directed and serves as showrunner on all 10 episodes of The Underground Railroad.