Nothing sparks the end of a relationship like learning your partner implanted a chip in your brain. Yet despite that horror and the “gilded cage” in which Byron trapped Hazel, a clean break still isn’t in the cards for them.

In the season finale of HBO Max’s Made for Love (which hit the streamer on Thursday), the chaotic couple came face-to-face once again to hash out their drama and go over the details of their impending divorce. But following his control-freak issues, illegal spying and snowballing lies (his name is Greg!?), Byron made one last-ditch play to get Hazel back when he revealed Herbert’s hidden pancreatic cancer diagnosis. If she would agree to return to the Hub, Hazel could use Gogol’s best medical resources to possibly save her dad’s life. And it was an offer she couldn’t refuse.

But can she trust the tech mogul-turned-sociopath? TVLine talked to executive producers Christina Lee and Alissa Nutting to get the low down on Byron’s never-ending dishonesty and immorality, and (oddly enough) whether Hazel and Byron’s relationship might just stand a chance back inside the Hub’s simulated reality.

TVLINE | In the finale, Byron tells Hazel that she’s his muse. What is it about her that has him so fixated?
CHRISTINA LEE | He’s a person who is used to controlling other people, particularly his wife. She was always a challenge for him that he was able to control at the Hub, and now that she’s a challenge again, he needs to get her back. It’s not enough to just get somebody else. That’s too easy for him. He needs to have her. The other part of it is he’s truly in love with Hazel.
ALISSA NUTTING | We also have this mystery surrounding how much of his feelings or emotions are earnest versus what is up with this business and company that rules his life. Also, he’s tied so much of Gogol’s future to the chip being inside of her, and being this wedded union they’re becoming the faces of. I think all of these things are very much on his mind.

TVLINE | Byron reintroduces himself to Hazel as “Greg Benson,” but is this just another one of his rampant lies?
LEE | It’s really fun to hear people asking if the Greg thing is real! I guess when you’re dealing with a narcissist or a sociopath, in this case both, you never know, right? But if we’re lucky to get a Season 2, that’s definitely something we want to dive into. We have the answers, but can’t share them. [Laughs]

TVLINE | Byron says that most people are “prisoners to life’s variables. We don’t have those inconveniences in the Hub.” Why is Byron so dead-set on existing inside his own fabricated reality?
LEE | He’s somebody who is about ultimate efficiency. You read about a lot of these tech people who believe that simulation is better than the real thing, and that whatever shortcuts technology can offer is preferable. But in this last year, we’ve all learned about that on a visceral level, and I think most of us would say that the simulated experience of being around humans is not the same as actually connecting. But he is somebody who wants to be in control of everything, so the Hub allows for that.
NUTTING | I think behind control, there’s always a sense of fear. It’s one of the things that allows us to empathize with Byron’s character. You do see this layer, misguided as it is, of being afraid of being abandoned. There’s a whole… is it a princess in a pumpkin house? You know the fairy tale?
LEE | [Laughs] …no?
NUTTING | Forget I said anything [Laughs]… oh, “Peter, Peter Pumpkin Eater!” I think there’s also the sense of him building, whether consciously or not, this gilded cage to keep his wife in where she’s his and literally can’t leave him. 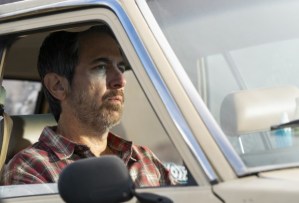 TVLINE | By season’s end, Hazel makes a selfless decision to return to the Hub in order to help her dad. What, in your opinion, was the key turning point in the relationship between Hazel and Herbert?
LEE | When she comes back and finds out that he’s sleeping instead of being awake worrying about her, that was the first time she could voice so much of the pain she felt over the years about their relationship and how he wasn’t there for her. That opened something up for them. The moment when he goes with her to her mother’s grave and they speak honestly for the first time and actually feel OK in saying that they care about each other, that was the opening of their relationship with each other.
NUTTING | We have these little moments trickling up, like at the end of Episode 5, when he makes a statement of, “My kid’s home, I feel good.” It seems to land, and pleasantly surprise her.

TVLINE | I can’t help but wonder if there’s even a sliver of a chance that Byron and Hazel will actually reconcile. Is that absolute crazy talk?
LEE | Not at all.
NUTTING | That’s great to hear! Our hope was to draw upon the complexity of relationships, and even one with toxic elements present. What do you do when feelings don’t disappear, and when attraction doesn’t disappear? Then also, just understanding, as an audience, a dual side. Both of them are coming from this wounded place. Clearly, Byron has all the power and did something that’s unforgivable, but our hope was to complicate it a bit and have people saying, “And yet… !”
LEE | It was intentional, and it’s a credit to Billy [Magnussen]. We wanted to have empathy for Byron. When you talk about any abusive relationship and why someone stayed for a long time, particularly Hazel for 10 years, the answer is never black-and-white. Like Alissa said, there’s good there along with that. It’s complicated.

TVLINE | What are your plans for Herringbone [Dan Bakkedahl] and Fiffany [Noma Dumezweni], should you return for Season 2? [The series has not yet been renewed.]
LEE | As long as they have been working at Gogol, they have known the pasture cube as being the place where they put the bad people Byron wants to get rid of, but not execute. It’s the only place they don’t know the inner workings of. They don’t know what’s in there, they don’t know how it works or how to get out. The question will be: How do they get out, if they do at all, and also what will happen if Fiffany finds out that Herringbone is the reason she’s in there at all?
NUTTING | There’s both cops being sent to jail, because they’re both trapped in this space with these people they’ve betrayed on Byron’s behalf. So yeah, they have a dangerous road ahead.

TVLINE | With Hazel deciding to re-enter the Hub, how will Hazel and Byron’s dynamic change next season?
LEE | That is the true question! We have lots of answers to that, but we’re waiting for a Season 2 to be able to answer all of those questions. It’s a really good place to start.

Now it’s your turn! Are you hoping for a second season? Grade the finale and season below, then hit the Comments with your thoughts.