You might have thought that the doctors of Grey’s Anatomy were already stretched so thin that they couldn’t possibly be stretched any thinner. “Hold my beer,” said Thursday’s episode, in which they treated a patient injured in Seattle’s George Floyd protests as well as a man who didn’t believe that COVID is real (and, of course, had it). And none of that was as disturbing as what happened to poor Winston. Read on, and we’ll discuss how our protagonists made it through to the closing credits. 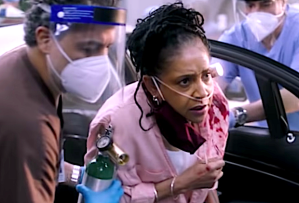 ‘REVOLUTIONS DON’T SCHEDULE APPOINTMENTS’ | As “Sign o’ the Times” began, Jackson was out for a jog when he came across protesters in the streets. At Cormac’s, his kids were painting, “I can’t breathe” signs. Maggie was in bed fretting about whether fiancé Winston was going to make it back from his cross-country drive in one piece; he was more interested in worrying about the apartment that he had an eye on for them. And at Grey Sloan, Bailey was preparing as best she could for what might come. Richard promised her that he’d be back, but he had to go protest himself. “You go give ’em hell!” she called after him. When Jackson arrived at the hospital with mom Catherine, he asked about his and Alma’s proposal to offer testing to low-income people. “Just let me get through this week,” she beseeched him. Just then, Cormac showed up with his kids — and a bloody head. Counter-protesters had been going to attack his son, had he not intervened. At that very moment, Richard showed up with a woman named Nell (Phylicia Rashad, Cosby Show icon and sister of Catherine’s portrayer, Debbie Allen); she’d been shot with a tear-gas canister at the protest. (When I say shot, I mean the thing was still sticking out of her shoulder.) 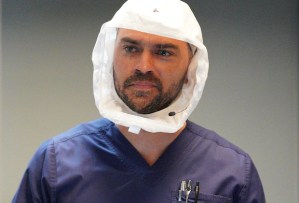 ‘IT LOOKS LIKE YOU LOST A BAR FIGHT’ | Treating Nell, Richard and Jackson explained that they wanted to make sure that it hadn’t hit any major arteries before they removed it. “Can you imagine firing poison gas at this woman?” Webber asked his stepson. At first, the protest had been “beautiful,” he added. “Good trouble lights you up.” Then, of course, it had all gone horribly wrong. In surgery with Richard, Jackson complained that Mom wasn’t interested in his ideas, only her own. Richard assured him that Catherine might be more receptive next week. How was he so optimistic? Nell hadn’t been fazed by what had happened, Webber pointed out. She’d been energized. Naturally, Jackson, never having protested, didn’t understand; he’d always had to work or study, so instead, he’d written a check. “You think that’s a copout?” he asked Richard, who replied that he tried not to judge. Post-op, Nell snarked that her situation could’ve been much better — Richard could’ve been the one who’d gotten hit. She wasn’t worried about another scar, she told Webber, Jackson and Cormac. She was covered in ’em. She’d been to protests since she was 11. She’d even been at MLK’s “I Have a Dream” speech and vividly recalled the feeling of possibility with which it had left her. That feeling, she added, was worth a few scars.

‘IT HAS GLASS BRICKS AND ONLY TWO WINDOWS… AND GLASS BRICKS’ | Paged by Owen, Maggie found it difficult to concentrate on her work with Winston texting her about their soon-to-be living arrangements. But she pulled it together when a fellow named Guy was brought in after being hit with a bullet covered in rubber. Winston was breaking it to his fiancée that he had taken the apartment that she didn’t want when — yikes — he was pulled over by the cops. “Music off, hat off, hands on the wheel,” Winston told himself before the cop approached. But when the officer insisted that Winston turn off the phone, disconnecting Maggie, both he and Pierce understandably freaked. (If that didn’t put you in the moment, dunno what would.) As Guy went into defib (over and over), Maggie gave her phone to Baby Ortiz to keep calling Winston; she wanted the cops to know that someone was checking on him — constantly. Before taking Guy into surgery, Maggie begged Richard to go find Winston — and he would, if he didn’t hear from her honey soon. Thankfully, as soon as Pierce was done in the O.R., Richard had Winston on the phone. But he was anything but OK. The cops had made him get out of the car, take off his mask… they searched everything, unpacked his belongings… “I’m not OK,” he admitted. “I just gotta breathe a little bit, ya know?” 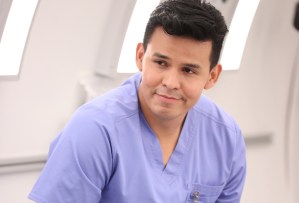 ‘IS SHE MEAN?’ | Checking on Meredith with Teddy, Bailey told Altman that she wanted Levi to give her her hyperbaric-chamber treatment. And he certainly tried to rise to the occasion, telling Mer to picture herself on a cloud… but not like the kind in heaven. Soon, they were joined in the chamber by intern James and his patient. Mer’s “the most influential teacher I ever had,” Schmitt said, “even when she’s asleep.” James hoped he’d get to operate with her one day. “Me, too,” sighed Levi. Later, James’ patient went into distress and… WTH? Did his intestines burst out? Thankfully, Levi heard Mer in his head, and he not only managed to keep his cool, he channeled his inner Grey, testiness and all.

‘COVID TOE? THAT’S THE BEST YA GOT?’ | Meanwhile, Bailey and Mabel treated a Mr. Anderson who couldn’t be bothered with a COVID test because “I know it’s a scam.” (Perfect part for Coby Ryan McLaughlin, who was so scuzzy as Shiloh on General Hospital.) Though he tested positive, and was throwing blood clots, he wasn’t remotely interested in participating in the “scam.” “What?!? What?!?” Bailey said upon excusing herself. Shortly, she calmed herself, returned to the d-bag’s room and warned him that his condition could kill him. “This won’t magically go away,” she emphasized. He had zero f–ks to give. Later, Bailey explained to Teddy Mr. Anderson’s theory that they were getting rich off COVID. And here all they had to show for it was a dead mother and a nervous breakdown! Mid-laugh, Miranda was paged to the parking lot — Anderson had taken off and promptly collapsed. 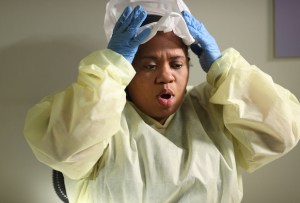 ‘HOW CAN I TREAT SOMEONE WHO IS OFFERED HELP AND CHOOSES TO WALK AWAY’ | As the episode drew to a close, Bailey found herself beyond frustrated that Mr. Anderson had died rather than accept treatment. Maggie, after reporting to Owen that Winston was back on the road, took a call from Guy’s mother to reassure her that he was OK. Jackson challenged his mother: Why hadn’t they ever protested? Why didn’t he have scars? “If our foundation is so good at fighting the good fight,” he asked, “why isn’t anything getting better?” He might not have scars, she shot back, but she had decades of them, thank you very much. He had no idea how many wars she’d fought. Eventually, she decided that he sounded like his father. Would that be the worst thing? he wondered. End. Of. Argument. When Cormac got home, he apologized to his boys, not for trying to protect them but for making them stay home. He should’ve let them protest — this was their country — so long as it was during the day and with him along. As Jackson left the hospital, Richard offered him a ride — curfew and all. But Jackson turned him down; he was going to march home on foot. Once there, he took off for a destination 11 hours away. To see his father perhaps? Finally, Winston pulled in to the drive at Mer’s and held onto Maggie for dear life.

So, what did you think of “Sign o’ the Times”? Hit the comments with your reactions/reviews.